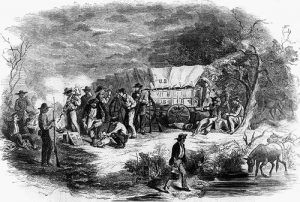 William J. McGrew might have been a hero, but unfortunately, he turned out to be a scalawag. Born in 1844 in either Claiborne or Copiah County, Mississippi, his roots were Old Alabama, but his destiny was an early grave in unholy ground in Texas.

He joined the Porter’s Guards, Co. H of the 4th Texas Infantry C.S.A., at the beginning of the Civil War in Montgomery, Texas, but was discharged in 1861 as being disabled. He was only seventeen at the time. He returned home to Montgomery in Montgomery County, Texas, to eventually become a lieutenant of the home guard, Co. K, 20th Texas Regiment, basically assigned to duty in Texas and the Indian Territory.

Remaining in Porter’s Guards of Hood’s famous Texas Brigade were the Cartwright brothers of Montgomery’s Bear Bend.  Unfortunately, E. W. “Ras” Cartwright became the first casualty of the company. As the group was being shipped to the Virginia battlefields, the train stopped at Holly Springs, Mississippi. “Ras,” six feet six, borrowed a sword and was impersonating an officer in order to impress the Southern belles gathered on the platform.

Evidently, he was enjoying himself so much that he was the last man to leap aboard the moving train. Somehow the sword caused him to trip and fall beneath the train, severing both legs and resulting in his death. The Cartwrights’ bad fortune continued when brother James G. W. Cartwright was killed in the bloody Wilderness Campaign in Virginia, and brother Lemuel, the eldest, was wounded and lost an arm in the last major conflict before Appomattox. Their unit was devastated, and of the 143 men of Porter’s Guards, Hood’s Texas Brigade, only nine remained to surrender with Lee in April of 1865. However, the survivors of the Cartwright family would soon cross paths with the McGrew-Oliver clan.

Following the war in 1867, William J. McGrew/McGraw was appointed county attorney during Reconstruction.  His reputation among town folks was “a Republican appointee by day, a KKK by night, and a horse thief in between,” according to Montgomery County Historical Society’s Choir Invisible. Added to his list of misdeeds were the actions of John P. and Robert O. Oliver, his younger half-brothers, teenagers who maddened the town folks by riding their horses into business establishments, shooting up the town, robbing, and stealing.

These boys had inherited a terrible legacy. Their father and William McGrew’s stepfather, Egbert O. “Eg” Oliver, had been shot down in 1853 in old Montgomery when the boys were small children.  From the Autauga Citizen, Prattville, Autauga County, Alabama, issue of Thursday, Oct. 20, 1853:

“Death of an Outlaw: The Galveston Civilian has a letter dated Montgomery, Texas, October 1st, in which the writer says: A sad occurrence took place in our (town) between seven and eight o’clock. A man, well known in this section of the country, if not in others, named Eg Oliver, was shot from his horse on the public square. He had been arrested by the sheriff of which was for an assault with intent to kill a fellow named Lang in this county. It being the greatest charge on which the sheriff was authorized to arrest him, he brought him to our town and delivered him to our sheriff, who committed him to jail in default of bail. About a week before court began here he broke out and was then supposed left.

But during court, he was seen several times in this vicinity, and one night went to the house of our sheriff and called him up, but would not let him approach near enough to arrest him. Yesterday, while most of our citizens were at dinner, he rode into the square, galloped about it, and then rode off again, in defiance to all. He was pursued by the sheriff and several citizens but eluded the pursuit, and last night just at dark came into town again, threatening, as I am informed, to burn the jail. In attempting to arrest him for the purpose of recommitting him, he refused to surrender, and while in the act, as was supposed from his action (it was dark) of shooting upon those gathered around him, he was shot down, fell from his horse and died immediately. Who committed the deed, can never be known, as there were several shots fired at the same time. Thus perished a man, who, by his reckless and lawless course of life has been a horror to some, and respected by but few. May the memory of his many errors be buried with him. He has left a wife and two small children who have been compelled to flee from him, and seek protection under the roof of strangers.”

To make matters worse, William’s real father had been an outlaw in his own right. William “Red Bill” McGrew and his cousin William “Black Bill” McGrew, in their early twenties, had killed two teenage boys in Sumter County, Alabama in 1835. In May, Alabama Governor John Gayle put out an $800 bounty for their apprehension. From the Commercial Register of Mobile:

“Wanted – A Proclamation – On or about the first day of April of the present year [1835], William McGrew and William P. McGrew, in the county of Sumter [Alabama] murdered a couple of boys in the foulest manner, and under the most shocking and aggravated circumstances. The oldest of the lads was 16 or 17 years of age and his little brother about 11 or 12. Their name was Kemp. They were peaceably at work, earning a subsistence for the indigent family to which they belonged, having given no offense or provocation whatsoever, when they were cruelly shot down at the same time, in a very wantonness of deliberate and cold-blooded murder.”

“William P. McGrew (“Black Bill”) is about twenty-four years of age, hair a little dark, fair skin and blue eyes; mild, and retiring look when sober; six feet high. William McGrew, (“Red Bill”) the cousin of the other, is about 21 years old, red hair, fair skin, eyes between gray and blue, six feet high, down look and forbidding countenance. Both addicted to intemperance.”

“Black Bill” McGrew fled to Texas, to a place “about 125 miles from Nacogdoches” where bounty hunters from Alabama ” handed a letter, perhaps from some authority in Texas to a man there by the name of Bowie with the expectation of getting his assistance in the taking of McGrew; but he being the friend of McGrew showed him the letter. The party in pursuit of McGrew immediately became alarmed and fled,” according to the Voice of Sumter paper, Nov. 6, 1837. Eventually, McGrew was betrayed by a man posing as a friend and turned over to the three bounty hunters. He was returned to Alabama where he escaped from the Mobile jail and was subsequently recaptured by the sheriff in Little Rock, Arkansas. As he was being returned to Alabama, he created such a commotion on board the steamboat trying to escape that the Captain was obliged to put him and the sheriff off at Vicksburg. He was then shackled and the sheriff and a contingent of men delivered him for trial in Sumter County. Tried for murder, he received a $500 fine and one year for manslaughter since evidence proved the Kemp boys had readied guns in an ambush position. In addition, the Kemp boys’ mother, who was the only eyewitness, told at least three different stories to different people and did not fare well under cross-examination. Yet within the year, “Black Bill” died from his prison experience.