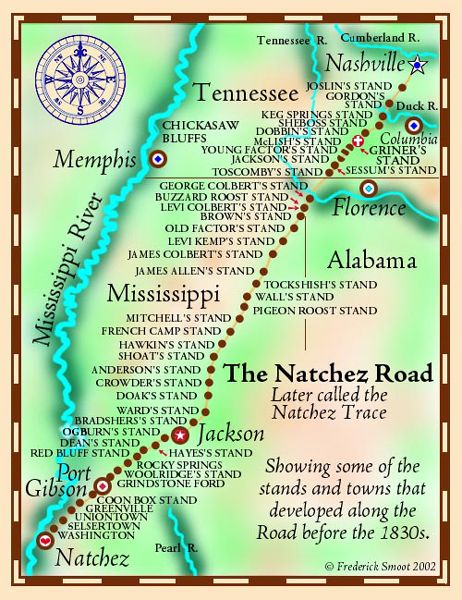 Natchez to Near Lorman, Milepost 1-30

Near Lorman to Rocky Springs, Milepost 31-60

North of Tupelo to Alabama State Line Milepost 269 to 308

The earliest known people to utilize the forested road, called a trace, were the Mississippi Mound builders, whose culture flourished from about 800 A.D. to 1500 A.D. These hunters and gatherers followed the early footpaths created by the foraging of bison, deer, and other large game that could break paths through the dense undergrowth. These early peoples also built roads, cultural centers, and numerous earthen monuments used as burial sites and temples, several of which can still be seen along the Natchez Trace Parkway.

Later, the trace was frequented by the Choctaw, Chickasaw, and Natchez tribes, who called the region home and traveled upon the trail on hunting and trading expeditions. By the time the first European explorer, Hernando de Soto, came to the region, the path was well-worn, and the Mississippi Mound builders were gone. Later, more explorers would use this “wilderness road,” followed by frontiersmen and pioneers.

Some of the Natchez Trace’s best-known travelers were farmers and boatmen from the Ohio River regions of Pennsylvania, Ohio, and Kentucky who floated supplies down to ports in Natchez, Mississippi, and New Orleans, Louisiana, at the beginning of the 1800s. Regardless of where they came from, they were collectively known as “Kaintucks.” Other famous figures traveled the Natchez Trace, including Meriwether Lewis, who had previously led the Lewis and Clark Expedition. While making his way from Missouri to Washington D.C. in 1809, he died under mysterious circumstances at a small cabin in Tennessee. He was buried there, where his body remains today. General Andrew Jackson traveled on the Trace a few years later with his troops during the War of 1812. 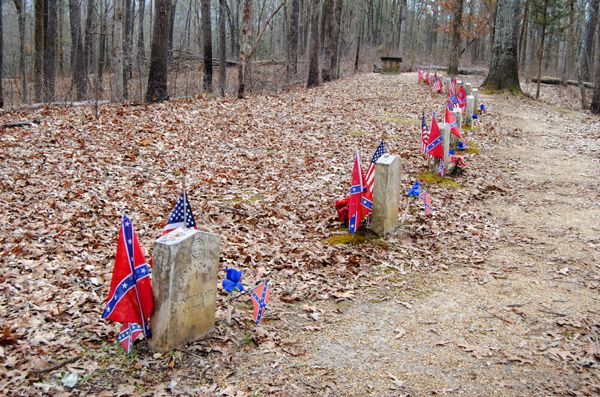 Though U.S. Troops began to improve the Natchez Trace beginning in 1801, it wasn’t until the War of 1812 that the military capitalized on the efforts. The popular path through Choctaw and Chickasaw lands became a vital thoroughfare when it was believed British ships threatened the Gulf Coast. Having traveled the Trace repeatedly on other business, General Andrew Jackson relied on the Trace several times to transport his troops. His cavalry traveled to Washington, Mississippi, north of Natchez, on it in 1813. The entire 2nd Division Tennessee Regiment slogged its way back along the Trace when the troops were released without participating in the battle. Though the road was the best choice at the time, the troops still had to contend with knee-deep mud, oxen dying from the heat, an occasional rattlesnake, and a “heavy a shower of hail and rain that ever fell upon poor soldiers in the world,” according to soldier A.J. Edmundson. During this trip, Andrew Jackson earned his nickname, “Old Hickory.”

From mid-1813 to mid-1814, Jackson and his troops left to fight the Creek War in Alabama. Jackson took one of the Natchez Trace’s newest residents, John Gordon, with him. Captain Gordon became the leader of one of Jackson’s companies of “spies,” or scouts. Gordon left his family and home at the Natchez Trace and the Duck River’s intersection and became a Tennessee hero of the Creek War. With the Creek War conclusion, Jackson and his troops again focused on Great Britain and the Gulf Coast. In 1815, the misery of the 1813 trip up the Trace was likely forgotten with a more celebratory journey.

Whether famous, infamous, or anonymous, travelers of the Natchez Trace relied heavily on this wilderness road that meandered through a diverse terrain of swamps, rivers, and rolling hills. The Trace was a road home, a path of exploration, and a link to the Old Southwest’s growing population. Over time, new roads and population centers were developed; steamships carried people and supplies upstream, and the Old Trace fell out of use. Though the trace was no longer regularly used, it was not forgotten. Its’ centuries of history, legends, and lore of the many occupants and travelers along the trail would continue to “haunt” those who lived and traveled through the area. Tales of buried treasure, ghost stories, outlaws, witches, and more, became as much a part of the Natchez Trace as the pathway itself. (See: Legends and Mysteries of the Natchez Trace)

The Natchez Trace was officially reestablished as a unit of the National Park Service in 1938. Years later, in 2005, the Natchez Trace Parkway was completed, extending from Natchez, Mississippi, to Nashville, Tennessee. Today, the route still connects population centers and allows modern travelers to explore and discover earlier generations’ history and culture. The Parkway incorporates numerous visitor stops of historical, natural, and archeological interest, including seven Mississippi Mound sites. The Tupelo Visitor Center interprets the archeology and history of the Trace.

Continue next page for milepost/points of interest along the Trace.