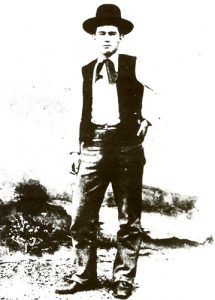 Sam McWilliams, aka: The Verdigris Kid, was an outlaw and member of the Bill Cook Gang, who operated in Indian Territory in 1894. Though the Cook Gang was short-lived, the gang was ruthless and known to shoot anyone who got in their way. Starting small, the gang first began by stealing horses and selling whiskey, before they quickly advanced to robbing banks, stores, and stagecoaches. As the months progressed, most of the members of the gang, including leaders Bill Cook and Cherokee Bill Goldsby were killed or arrested. However, Cook Gang members, Sam McWilliams and George Sanders were still at large. In April 1895, Sam “Verdigris Kid” McWilliams, George Sanders and Sam Butler rode into Braggs, Oklahoma ordering everyone to put up their hands.

The trio of outlaws quickly marched their prisoners to the Madden General Store and when the store clerk panicked and ran into the street, the outlaws shot him down. As their hostages stood waiting, the thieves robbed the general store and exchanged their clothing and boots for new ones. One of the hostages was then sent to bring a horse to the store, exchanging it for one of theirs.  Fortunately, the owner of the store was not present but could see the robbery taking place and quickly reported it to two law officers, one of which was U.S. Deputy Marshal Barbee. When the two officers arrived, they shot the Verdigris Kid and Deputy Marshal Barbee opened fire on the rest of the gang. George Sanders was also killed, and Sam Butler, though wounded, escaped. McWilliams was 19 years old.