Making a name for himself on the western frontier was gunfighter and outlaw “”unplay” Maxwell.

Maxwell, who would use several names during his lifetime while hiding from the law, was born James Otis Bliss somewhere around Boston, Massachusetts, about 1860. The son of a hotel owner, the boy received a good education but got into his first trouble while still a young man. Sometime around 1875, he got into a barroom brawl with a companion and ended up shooting him dead. Afterward, he fled westward, first going to Texas before moving northwest to Montana. There, he worked as a cowboy, honed his shooting skills, and was soon involved in the cattle/sheep wars.

Sometime later, he drifted into Wyoming and Utah, where he made his “living,” primarily rustling horses and cattle. In the early 1890s, he joined up with a man named Johnson, and the two stole a bunch of horses in Wyoming and then drove them to Nebraska to sell.

Stiffing Johnson out of the proceeds, Bliss took off for Wyoming, where he began to go by the name of “Catamount.” However, the law finally caught up with him, charging the rustler with grand theft. During the trial, Bliss went by the name of Clarence L. Maxwell. He was convicted and sent to the Wyoming State Prison in 1893.

During his three-year stint in prison, he met Butch Cassidy, and the two were discharged within a week of each other and continued to associate together after their releases. Though Maxwell never rode with the Wild Bunch, it is said that he wanted to but was rejected. Instead, he formed his own gang and tried to emulate the more famous gang.

However, Maxwell simply wasn’t as good an outlaw. In May 1898, he and another man robbed the Springville, Utah bank of some $3,000. Afterward, they fled towards Hobble Creek Canyon but were immediately pursued by a posse. Nearly 100 horsemen had caught up with them in no time, and the two robbers hid in the brush. When the authorities came upon them, shots were fired, and the second bandit was killed. Maxwell was apprehended and taken to the Provo, Utah jail, where he was positively identified. He refused to reveal the identity of his accomplice. Most of the money was recovered from the robbers or found buried near their hiding place. Maxwell was soon convicted of bank robbery and sent to the Utah State Prison. However, five years later, his sentence was commuted when he helped stop a prison break in 1903.

After his release, he went to work as a mine guard during a strike in Carbon County, Utah and did a little prospecting on his own. In the fall of 1904, Maxwell found ozokerite, an odoriferous mineral wax, in Colton, Utah. Maxwell soon formed the Utah Ozokerite Company with his lawyer, and the pair hired a superintendent to manage the operations. The mine soon became the largest known ozokerite mine in the world and did so well that it went public. 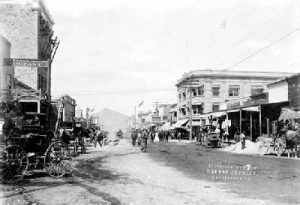 But Maxwell evidently wasn’t interested in mundane mining operations, preferring his “role” as a gunfighter. He was next known to have been in Goldfield, Nevada, using the name of Thomas Bliss and allegedly working as a spy for mine owners, keeping an eye on the union’s striking workers. While there, he was involved in the death of a man named Joseph Smith but was not prosecuted. He soon drifted back to Utah, where in July 1907, he was involved in a gunfight with a railroad foreman named L.C. Reigle in Helper. When the smoke cleared, both were wounded. Maxwell was initially arrested but was never prosecuted for any crime.

Later that year, he appeared in San Francisco, California, going by the name of William H. Seaman and telling everyone he was “a descendent of one of the oldest titled families in Italy.” While there, he married a wealthy widow named Bessie Hume in January 1908. Though he allegedly pawned most of her jewelry, she stayed with him, and the two soon moved to Ogden, Utah. At first, Maxwell shaved his mustache, donned fashionable clothing, and lived the part of an “upstanding husband.” But that wouldn’t last long. He soon took up with a rough crowd again.

In June 1908, he and another man named William M. Walters held up a Wells Fargo stage at Rawhide, Nevada, and were captured. He was released on bail and never brought to trial.

The following summer, on August 23, 1909, Maxwell confronted Deputy Sheriff Edward Black Johnstone in a local saloon in Price, Utah. According to the tale, Johnstone had been tasked with stopping Maxwell’s plan to rob a large payroll. In the meantime, Maxwell already held a grudge against Johnstone because he had earlier identified him to a local sheriff in Goldfield, Nevada as a “bad man” and ex-convict.

When the two men came face to face in a Price saloon, Maxwell challenged him, and the two were soon outside in the dusty street. Maxwell told Johnstone he intended to kill him, drew his gun, and fired upon the deputy. However, his shot missed, going through his opponent’s shirt and scratching his arm. In the meantime, Johnstone fired back, hitting Maxwell first in the elbow and then in his heart. Now lying in the dusty street, Maxwell tried to shoot again when Johnstone fired a third shot into his lung. Maxwell’s last words were: “Don’t shoot again, Johnstone, you have killed me.”

When his body was being prepared for burial, it showed that his arms were covered in track marks, and opium was found concealed in a pocket. “Gunplay” Maxwell was a drug addict. He was buried in the pauper’s section of the Salt Lake City Cemetery under the name of William H. Seaman. However, his final resting place lies unmarked today.

The day after he was buried, the Salt Lake City Tribune printed a fitting epitaph:

“Whatever his tempestuous career may have been, matters little; his earthly record rests with him in the grave.”