“The most important lesson I learned was the winner of gunplay usually was the one who took his time. The second was that, if I hoped to live on the frontier, I would shun flashy trick-shooting as I would poison. I did not know a really  proficient gunfighter who had anything but contempt for the gun-fanner, or the man who literally shot from the hip.”

Though movies and television would like us to believe otherwise, it was very rare when gunfights occurred with the two gunfighters squarely facing each other from a distance in a dusty street. This romanticized image of the Old West gunfight was born in the dime novels of the late 19th century and perpetuated in the film era, to such a point that this fictional version is what our mind’s eye quickly conjures up when we hear the word “gunfight.” In actuality, the “real” gunfights of the Old West were rarely that “civilized.”

In fact, there are several misnomers about these “romanticized” gunfights, the first of which is that very rarely, did the gunfighters actually “plan” a gunfight to occur, “calling out” their enemy for dueling action in the street. Instead, most of these many fights took place in the heat of the moment when tempers flared, and more often than not, with the aide of a little bottled courage. They also didn’t occur at a distance of 75 feet, with each gunfighter taking one shot, one falling dead to the ground, and the other standing as a “hero” before a dozen gathered onlookers.

Instead, these fights were usually close-up and personal, with a number of shots blasted from pistols, often resulting in innocent bystanders hit by a bullet gone wild. Much of the time, it would be difficult to tell who had even “won” the gunfight for several minutes, as the black powder smoke from the pistols cleared the air.

This is not to say that it never happened similar to the movies. One of the rare instances is the Bill Hickok-David Tutt Shootout in Springfield, Missouri. Even then, it wasn’t a “planned” event, but rather, it occurred when Wild Bill ran into Tutt in the street and was insulted.

Always shown bravely facing each other in the popular westerns, in reality, the opponents were more often scampering for cover. The gunfights were not usually “clean” either, as the fighters were drinking and missing normally easy shots, continued to shoot until they had emptied their pistol.

Of those gunfighters that truly had a reputation as skilled shootists, they were not usually anxious to match their skills with another gunman with a similar reputation. Instead, they tended to avoid confrontation and undue risks whenever possible. 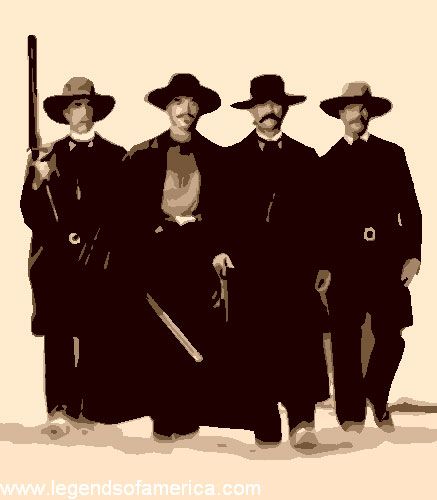 As to the low hanging holsters tied to the leg, that is a pure Hollywood invention. Most gunfighters carried their pistols stuck in their waistband, in a pocket, or a in a simple leather holster slipped on a belt. 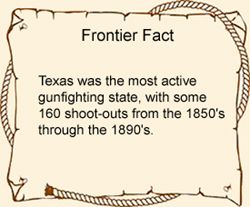 There are a number of gunfighters that whose names were well-known while they were still alive and are just as quickly recognized today, including Wyatt Earp, Billy the Kid, Bat Masterson, Bill Hickok, and Doc Holliday. Their reputations spread by word of mouth, usually resulting in a number of exaggerations and inaccuracies. These already exaggerated tales grew bigger with the retelling, often in the popular dime novels of the time. Other lesser-known shootists, that saw just as much, if not more action than their well-known counterparts were men such as Ben Thompson, Tom Horn, Kid Curry, King Fisher, Clay Allison, and Dallas Stoudenmire, just to name a few.

Here, you can read about many of the “real” gunfights of the Old West, where you’ll see the difference between television fiction and the real Wild West.

“If you want to hit a man in the chest, aim for his groin.”  — Bat Masterson

A fun video about Historic Hideout Pistols in the Old West, from our friends at Arizona Ghostriders