The Spell of Creve Coeur Lake 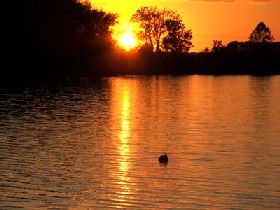 Not far west of St. Louis, Missouri, the Lake of Creve Coeur dimples in the breezes that bend into its basin of hills, and there, in summer, swains and maidens go to confirm their vows, for the lake has the influence to strengthen love and reunite contentious pairs. One reason ascribed for the presence of this spell concerns a turbulent Peoria, ambitious of leadership and hungry for conquest, who fell upon the Chawanons at this place, albeit he was affianced to the daughter of their chief. The girl herself, enraged at the treachery of the youngster, put herself at the head of her band–a dusky Joan of Arc, and the fight waged so furiously that the combatants, what were left of them, were glad when night fell that they might crawl away to rest their exhausted bodies and nurse their wounds.

Neither tribe daring to invite a battle after that, hostilities were stopped, but some time later the young captain met the girl of his heart on the shore, and before the amazon could prepare for either fight or flight he had caught her in his arms. They renewed their oaths of fidelity, and at the wedding the chief proclaimed eternal peace and blessed the waters they had met beside, the blessing being potent to this day.

Another reason for the enchantments that are worked here may be that the lake is occupied by a demon-fish or serpent that crawls, slimy and dripping, through the underbrush, whenever it sees two lovers together, and listens to their words. If the man proves faithless he would best beware of returning to this place, for the demon is lurking there to destroy him. This monster imprisons the soul of an Ozark princess who flung herself into the lake when she learned that the son of the Spanish governor, who had vowed his love to her, had married a woman of his own rank and race in New Orleans. So they call the lake Creve Coeur or Broken Heart. On the day after the suicide, the Ozark chief gathered his men about him and paddled to the middle of the water, where he solemnly cursed his daughter in her death and asked the Great Spirit to confine her there as a punishment for giving her heart to the treacherous white man, the enemy of his people. The Great Spirit gave her the form in which she is occasionally seen, to warn and punish faithless lovers.

Early in this century a restless Yankee, who wore the uninspiring name of Tompkinson, found his way into Carondelet–or Vuide Poche, the French settlement on the Mississippi since absorbed by St. Louis and cast about for something to do. He had been in hard luck on his trip from New England to the great river. His schemes for self-aggrandizement and the incidental enlightenment and prosperity of mankind had not thrived, and it was largely in pity that M. Dunois gave shelter to the ragged, half-starved, but still jaunty and resourceful adventurer. Dunois was the one man in the place who could pretend to some education, and the two got on together famously.

As soon as Tompkinson was in clothes and funds–the result of certain speculations–he took a house and hung a shingle out announcing that there he practiced medicine. Now, the fellow knew less about doctoring than any village granny, but a few sick people that he attended had the rare luck to get well in spite of him, and his reputation expanded to more than local limits in consequence. In the excess of spirits that prosperity created he flirted rather openly with a number of virgins in Carondelet, to the scandal of Dunois, who forbade him his house, and of the priest, who put him under a ban.

For the priest, he cared nothing, but Dunois’s anger was more serious—for the only maid of all that he really loved was Marie Dunois, his daughter. He formally proposed for her, but the old man would not listen to him. Then his “practice” fell away. The future looked as dark for him as his recent past had been until a woman came to him with a bone in her throat and begged to be relieved. His method in such cases was to turn a wheel-of-fortune and obey it. The arrow this time pointed to the word, “Bleeding.”

He grasped a scalpel and advanced upon his victim, who, supposing that he intended to cut her throat open to extract the obstacle, fell a-screaming with such violence that the bone flew out. What was supposed to be his ready wit in this emergency restored him to confidence, and he was able to resume the practice that he needed so much. In a couple of years he displayed to the wondering eyes of Dunois so considerable an accumulation of cash that he gave Marie to him almost without the asking, and, as Tompkinson afterward turned Indian trader and quadrupled his wealth by cheating the red men, he became one of the most esteemed citizens of the West.

It was Twelfth Night, and the French village of Cahokia, near St. Louis, was pleasantly agitated at the prospect of a dance in the old court saloon, which was assembly-room and everything else for the little place. The thirteen holy fires were alight–a large one, to represent Christ; a lesser one, to be trampled out by the crowd, typing Judas. The twelfth cake, one slice with the ring in it, was cut, and there were drink and laughter, but, as yet, no music. Gwen Malhon, a drift-wood collector, was the most anxious to get over the delay, for he had begged a dance from Louison. Louison Florian was pretty, not badly off in possessions and prospects, and her lover, Beaurain, had gone away. She was beginning to look a little scornful and impatient, so Gwen set off for a fiddler.

He had inquired at nearly every cabin without success and was on his way toward the ferry when he heard music. Before him, on the moonlit river, was a large boat, and near it, on the bank, he saw a company of men squatted about a fire and bousing together from a bottle. At a little distance, on a stump, sat a thin, bent man, enveloped in a cloak, and it was he who played. Gwen complimented him and pleaded the disappointment of the dancers in excuse of an urgent appeal that he should hurry with him to the court saloon. The stranger was courteous. He sprang into the road with a limping bound, shook down his cloak so as to disclose a curled mustache, shaggy brows, a goat’s beard, and a pair of glittering eyes. “I’ll give them a dance!” he exclaimed. “I know one tune. They call it ‘Returned from the Grave.’ Pay? We’ll see how you like my playing.”

On entering the room where the caperish youth were already shuffling in corners, the musician met Mamzel Florian, who offered him a slice of the cake. He bent somewhat near to take it, and she gave a little cry. He had found the ring, and that made him king of the festival, with the right to choose the prettiest girl as queen. A long drink of red wine seemed to put him in the best of trim, and he began to fiddle with a verve that was irresistible. In one minute the whole company–including the priest, some said–was jigging it lustily. “Whew!” gasped one old fellow. “It is the devil who plays. Get some holy water and sprinkle the floor.”

Gwen watched the musician as closely as his labors would allow, for he did not like the way the fiddler had of looking at Louison, and he thought to himself that Louison never blushed so prettily for him. Forgetting himself when he saw the fiddler smile at the girl, he made a rush for the barrel where that artist was perched. He bumped against a dancer and fell. At that moment the light was put out and the hall rang with screams and laughter. The tones of one voice sounded above the rest: “By right of the ring the girl is mine.”

“He has me,” Louison was heard to say, yet seemingly not in fear. Lights were brought. Louison and the fiddler were gone, the stranger’s cloak and half of a false mustache were on the floor, while Gwen was jammed into the barrel and was kicking desperately to get out. When released he rushed for the river-side where he had seen the boat. Two figures flitted before him, but he lost sight of them, and in the silence and loneliness his choler began to cool. Could it really have been the devil? An owl hooted in the bush. He went away in haste. There was a rumor in after years that Beaurain was an actor in a company that went up and down the great river on a barge, and that a woman who resembled Louison was also in the troupe. But Gwen never told the story of his disappointment without crossing himself.

Lemp Mansion – One of the Most Haunted Places in America