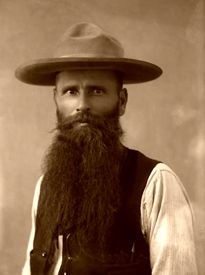 Born on February 9, 1851, as James M. Riley in Mississippi, he worked as a cowboy in Texas when he grew up. A lifelong horse thief, he was said to have stolen his first steed at 14. In 1870, he was convicted of murder in Texas but was able to make his escape.

It was probably after this scrape with the law that he began to use the alias  David Charles Middleton, but for whatever reasons, was often more familiarly called “Doc.” During his “career” as a horse thief, he would also go by the name of Jack Lyons and was also known as “Texas Jack,” “Gold-Tooth Jack,” “Gold-Tooth Charley,” and others.

He made his way north on a cattle drive to Ogallala, Nebraska, in 1876. In January 1877, he killed a soldier named James Keefe in a Sidney, Nebraska saloon.

Though arrested, he escaped again and made his way to Wyoming, where he began to organize a gang of outlaws called the “Pony Boys.” The men quickly began to steal horses, primarily from Indians but sometimes from the government as well. Operating in Nebraska, Iowa, the Dakotas, and as far south as Texas, they were responsible for stealing thousands of horses.

The Indians became angry at losing the horses and began to retaliate by taking the mounts of ranchers. Within no time, nearly every stolen horse was blamed on the Pony Boys, and a $1,000 reward was placed on Middleton’s head.

After the gang stole some 40 head of horses in 1878, Wyoming Stock Grower’s Association detective Billy Lykins gathered a posse and pursued the bandits. Catching up with the outlaws near Julesburg, Colorado, Middleton was captured after a shoot-out and the stolen horses retrieved. That night, however, Middleton was once again able to escape, but the detective was determined.

Soon, Lykins joined efforts with the Union Pacific Railroad and Department of Justice Special Agent William Llewellyn. They tracked Middleton to the Niobrara Valley in Nebraska, where, after a shoot-out, in which Middleton was struck in the stomach, he was finally captured. He was first taken to Sidney, Nebraska, and later transferred to Cheyenne, Wyoming, to stand trial. There, he pleaded guilty to horse stealing and received a five-year sentence. He was placed in a Nebraska prison on September 18, 1879, and released on June 18, 1883.

After his release, the members of his old gang had either been captured or killed, and Middleton worked at various occupations. He made his way to Gordon, Nebraska, where he lived for several years, working as a bartender, a gambler, a deputy sheriff, and even worked in Buffalo Bill’s Wild West Show for a few months.

During the 1890s, he relocated to Edgemont, South Dakota, where he operated a saloon for several years. In 1893, he entered the famed Chadron, Nebraska, to Chicago horse race, when the Columbian Exposition was held in Chicago, Illinois. Though he finished, he didn’t win.

Later, he opened a saloon at Ardmore, Nebraska, and bootlegged to the Sioux Indians on the Pine Ridge Reservation. After Fort Robinson soldiers wrecked his saloon, he moved again to Orin Junction, near Douglas, Wyoming, where he operated an illegal saloon.

During this time, a knife fight occurred in the saloon in which Doc was stabbed in the stomach. He was then arrested and held in the county jail. Infection developed just days later, and he died on December 13, 1913. He is buried in the Douglas Cemetery in Douglas, Wyoming.

Doc Middleton was described as a likable man, good-tempered, sober, and industrious despite his horse-thieving ways. He was never known to drink or gamble and made several friends among the frontier, including Bill Cody, Jim Cook, Print Olive, and several ranchers in where he was known to steal horses. He was described by the Cheyenne Daily Sun as a “golden-toothed lover of other folks’ cattle and horseflesh.”