By the Office of the Chief Of Military History

Perhaps because of a tendency to view the record of a military establishment in terms of conflict, the U.S. Army’s operational experience in the quarter century following the Civil War has come to be known as the Indian Wars. Previous struggles with the Indian, dating back to colonial times, had been limited as to scope and opponent and took place in a period when the Indian could withdraw or be pushed into vast reaches of uninhabited and as yet unwanted territory to westward. By 1865 this safety valve was fast disappearing; routes of travel and pockets of settlement had multiplied across the western two-thirds of the nation, and as the Civil War closed, white Americans in greater numbers and with greater energy than before resumed the quest for land, gold, commerce, and adventure that had been largely interrupted by the war. 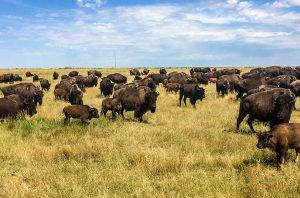 The showdown between the older Americans and the new — between two ways of life that were basically incompatible — was at hand. The besieged red man, with white civilization pressing in and a main source of livelihood — the buffalo — threatened with extinction, was faced with a fundamental choice: surrender or fight. Many chose to fight, and over the course of some 25 years the struggle ranged over the plains, mountains, and deserts of the American West, a guerrilla war characterized by skirmishes, pursuits, massacres, raids, expeditions, battles, and campaigns, of varying size and intensity. Given its central role in dealing with the Indian, the Army made a major contribution to continental consolidation.

The Setting and the Challenge

After Appomattox, the Army had to muster out over a million volunteers and reconstitute a Regular establishment that had languished during the Civil War when bounties and short enlistments made service in the volunteers more profitable. There were operational commitments to sustain during and after the transition, some an outgrowth of the war just ended, others the product of internal and external situations that could not be ignored. Whereas the prewar Army of the 1850’s was essentially a frontier Army, the postwar Army became something more. To the defense of the frontier were added military occupation of the southern states, neutralization of the Mexican border during Napoleon’s colonial enterprise under Maximilian, elimination of a Fenian (Irish Brotherhood) threat to Canada in the Northeast, and dispersion of white marauders in the border states. But these and other later involvements were passing concerns. The conflict with the red man was the overriding consideration in the next twenty-five years until Indian power was broken.

Unfortunately, the military assets released from other tasks were lost through reductions in force instead of being diverted to frontier defense. For even though the country during the Indian campaigns could not be said to be at peace, neither Congress nor the war-weary citizens in the populous Atlantic states were prepared to consider it in a state of war. And in any case, there was strong sentiment against a large standing army as well as a widely held belief that the Indian problem could be settled by other than military means.

As the postwar Army took shape, its strength began a decade of decline, dropping from an 1867 level of about 57,000 to half that in the year that General Custer was killed, then leveling off at an average of about 26,000 for the remaining years up to the War with Spain. Effective strength always lay somewhere below authorized strength, seriously impaired, for example, by high rates of sickness and desertion.

Because the Army’s military responsibilities were of continental proportions, involving sweeping distances, limited resources, and far-flung operations, an administrative structure was required for command and control. The Army was, therefore, organized on a territorial basis, with geographical segments variously designated as divisions, departments, and districts. There were frequent modifications of organization, rearrangements of boundaries, and transfers of troops and posts to meet changing conditions.

Development of a basic defense system in the trans-Mississippi West had followed the course of empire; territorial acquisition and exploration succeeded by emigration and settlement brought the whites increasingly into collision with the Indians and progressively raised the need for military posts along the transcontinental trails and in settled areas.

The annexation of Texas in 1845, the settlement of the Oregon boundary dispute in 1846, and the successful conclusion of the Mexican War with the cession to the United States in 1848 of vast areas of land, all drew the outlines of the major task facing the Army in the West in the middle of the nineteenth century. During the period between the Mexican and Civil Wars, the Army established a reasonably comprehensive system of forts to protect the arteries of white travel and areas of white settlement across the frontier. At the same time, operations were launched against Indian tribes that represented actual or potential threats to movement and settlement.

Militarily successful in some cases, these operations nevertheless hardened Indian opposition, prompted wider red provocation, and led to the delineation of an Indian barrier to westward expansion extending down the Great Plains from the Canadian to the Mexican border. Brigadier General William S. Harney, for example, responded to the massacre of Lieutenant John L. Grattan’s detachment by Sioux with a punishing attack on elements of that tribe on the Blue Water in Nebraska in 1855. Farther south Colonel Edwin V. Sumner hit the Cheyenne on the Solomon Fork in Kansas in 1857, and Brevet Major Earl Van Dorn fought the Comanche in two successful battles, at Rush Spring in future Oklahoma and Crooked Creek in Kansas, in 1858 and 1859, respectively.

In the Southwest between the wars, Army units pursued Apache and Ute in New Mexico Territory, clashing with the Apache at Cieneguilla and Rio Caliente in 1854 and the Ute at Poncha Pass in 1855. There were various expeditions against various branches of the elusive Apache involving hard campaigning but few conclusive engagements such as the one at Rio Gila in 1857. It was in this region in 1861 that Lieutenant George N. Bascom moved against Chief Cochise, precipitating events that opened a quarter-century of hostilities with the Chiricahua Apache.

In the Northwest, where numerous small tribes existed, there were occasional hostilities between the late 1840s and the middle 1860s. Their general character was similar to operations elsewhere: white intrusion, Indian reaction, and white counteraction with superior force.

The more important events involved the Rouge River Indians in Oregon between 1851 and 1856 and the Yakama, Walla Walla, Cayuse, and other tribes on both sides of the Cascade Mountains in Washington in the last half of the 1850s. The Army, often at odds with civil authority and public opinion in the area, found it necessary on occasion to protect Indians from whites as well as the other way around.