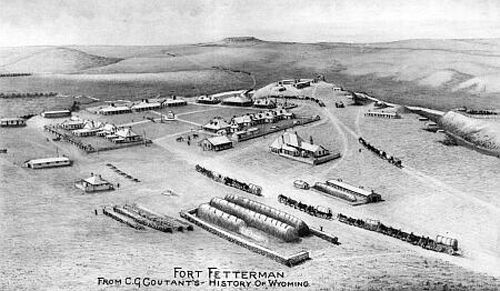 Figuring notably in the campaigns of the late 1860s and 1870s against the northern Plains tribes, Fort Fetterman, Wyoming was established on July 19, 1867, on a plateau above the valleys of LaPrele Creek and the North Platte River. Situated on the Bozeman Trail about 80 miles northwest of Fort Laramie, the post was an intermediate base between Fort Laramie and Forts Reno, Phil Kearny, and C. F. Smith. The latter three forts had been established the previous summer to guard the trail but had been under continual siege from Indian attacks. 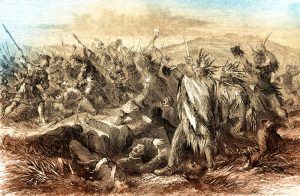 The post was named in honor of Captain William J. Fetterman who was killed in a fight with Indians near Fort Phil Kearny on December 21, 1866. On that day, a small Indian war party, in a feint, made a typical attack on a wood train returning eastward from Piney Island to the fort. Fetterman, along with two other officers, 48 infantrymen, 28 cavalrymen, and two civilians — 81 men in all, were sent to relieve the train. Although warned not to cross Lodge Trail Ridge, where he would be out of sight of the fort, Fetterman let a small party of warriors decoy him northward well beyond the ridge and into a carefully rehearsed ambush prepared by Red Cloud. Within half an hour, at high noon, hundreds of Sioux, Cheyenne, and Arapaho warriors annihilated the small force to the last man.

The post was built by Major William McEnery Dye, who led Companies A, C, H, and I, and the 4th Infantry in its establishment. However, by the time Fort Fetterman was activated, Sioux and Cheyenne had successfully halted traffic over the Bozeman Trail and as a concession to the Indians, the government, abandoned Forts Reno, Phil Kearny, and C. F. Smith in the summer of 1868, as part of the Fort Laramie Treaty. The then isolated Fort Fetterman assumed major importance as a supply base, headquarters, and marshaling point for expeditions into the hostile Powder River country.

The post also protected the nearby routes of the Union Pacific Railroad and the Oregon-California Trail, providing a safe haven for travelers. Though the pioneers may have seen it as an oasis on the frontier, its officers and troops did not, considering it a hardship post due to its lack of adequate supplies and equipment, which had to be hauled in from Fort Laramie. 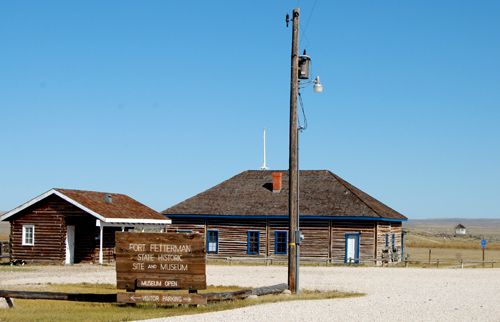 Notwithstanding its remote location and frequent desertions by enlisted men, the fort continued to grow and develop and by 1870 it was well established. A number of well-known old west personalities such as Jim Bridger, Wild Bill Hickok, Calamity Jane and “Buffalo Bill” Cody who were among the many whose some of those travels frequently took them to the fort. It became the base for General George Crook’s three expeditions in 1876 into the Powder River area: in March, culminating in the Battle of Powder River, Montana; in May-June, ending in the Battle of the Rosebud, also in Montana; and in November, highlighted by the defeat of Dull Knife’s Cheyenne along the Powder River.

The latter expedition, combined with others in 1876-77, ended the major Indian Wars with the northern Plains tribes. With the Indians confined to reservations, the fort outlived its usefulness and Fort Fetterman was abandoned in 1882.

Though the fort was closed, a community that had grown up around the post called Fetterman City, continued to serve as an outfitting point for area ranchers and for wagon trains. The settlement was a wild place for the few years that it existed. In 1886, the town of Douglas was founded a short distance to the south and Fetterman City went the way of the fort – abandoned. The buildings of the old fort and settlement, suffering under the elements, were sold, dismantled, and moved to other locations.

Today, part of the site is privately owned, but the vast majority is owned by the State of Wyoming, developing it into a State Historical Park since 1962.

Two of the remaining original buildings — a log warehouse and adobe duplex officers’ quarters now house a small museum. They stand among the many visible foundations of the Fort and Fetterman City. The park also provides an interpretive trail, several picnic areas, and allows camping.

The site is located about 11 miles northwest of Douglas, Wyoming on Highway 93, take Exit 140 off Interstate 25. 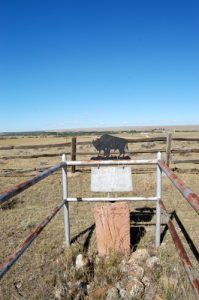