In June 1864, Fort Ellsworth, Kansas, was established on the northeast side of the Smoky Hill River to protect the traders and travelers along the Santa Fe Trail and the Smoky Hill Trail to Denver, Colorado.

Construction of the post became the responsibility of 2nd Lieutenant Allen Ellsworth of Company H, 7th Iowa Cavalry, for whom the post was named.

Though little information was ever recorded about the post, one traveler who stopped there in September 1865 wrote to his wife, giving this description:

“You would laugh to see the fort; here is a group of log shanties covered with dirt; most of the windows are made of boards hung on leather hinges and made to swing open and shut. There is two or three of them which have a half window sash, and some of them have panes of glass in them.

I suppose the aristocracy resides in them, which have the glass. It is a military post. There are soldiers established here. There is but very few log shacks perhaps eight or ten in all, and a cat could go in and out of them between the logs. There is a row of caves along the riverbank in which the soldiers burrow in winter. You can look away & see nothing but high stony hills and valleys… This country should be left to the Indians, and wild beasts and such is pretty much the case.” 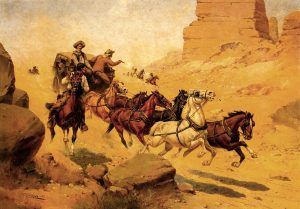 On at least two occasions, Indians directly attacked Fort Ellsworth. Once shortly after the fort was established, they drove off about 50 horses and five mules. The second attack happened the following summer, in June 1865, but little is known about it.

In 1865, the fort also acquired a stage station for the Butterfield Overland Despatch Stage Line, which traveled along the Smoky Hill Trail between Atchison, Kansas, and Denver, Colorado. But the stagecoaches were often in danger from the Indians, who often waylaid them, killing several drivers. The soldiers spent much time escorting stagecoaches through the dangerous area.

In 1866, the fort was renamed Fort Harker in honor of General Charles Garrison Harker, who died in combat during the Civil War. The following year, the fort was relocated one mile to the northeast, closer to the Union Pacific Railroad terminus, and the old fort buildings were torn down. The railroad was completed in July 1867, and Fort Harker soon became a major supply post for forts farther west and several military campaigns to subdue the Indians.

The Indians increased their resistance, but this would not be the worst of the depredations at Fort Harker. No sooner was the new fort completed than a cholera epidemic broke out. From June to December of 1867, more than 800 cases were reported, resulting in the deaths of more than 50 people, both civilians and soldiers alike. 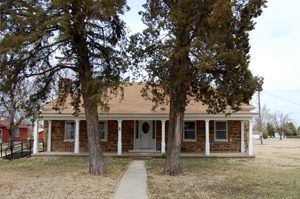 Regardless of the disease running rampant through the post, Fort Harker became the starting point and significant base of Major General Winfield S. Hancock’s 1,400-man expedition of 1867 that sought to intimidate the Cheyenne and other Kansas tribes. Burning villages and pursuing the Indians relentlessly, his efforts never resulted in a significant engagement. Instead, it inflamed the Indians, who often led the soldiers on wild “goose-chases” across the sea of grassland. The Indians retaliated by attacking wagon trains even more.

Over the next several years, General Philip Sheridan, General Nelson Miles, and George Armstrong Custer would utilize the post as a preparation point for their various campaigns against the Plains Indians.

While the officers and commanders were making plans for military campaigns, the soldiers often spent their time in the nearby lawless town of Ellsworth, where the cattle trade was making the flourishing settlement one of the most wicked in Kansas.

By 1871, Fort Harker had declined in importance in the Indian Wars as the natives had been driven westward. In March and April 1872, most of the troops were moved southwest to Fort Union, New Mexico. The base was entirely abandoned by October 5, 1872.

Today, three original buildings are part of the Fort Harker Museum, run by the  Ellsworth County Historical Society. The complex includes the original guardhouse, junior officer’s quarters, and the old railroad depot. Other buildings once used by commanding officers have been modernized and are now utilized as private residences.

The post is located in the small town of Kanopolis, about five miles southeast of Ellsworth, Kansas. 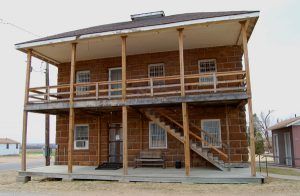