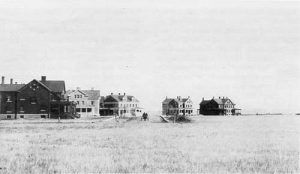 When the Northern Pacific Railroad began advancing westward, the U.S. Army was sent to Dakota Territory in June 1872, to protect the survey crews and railroad workers. The first post, built by Companies B and C of the 6th Infantry was called Fort McKeen on the west bank of the Missouri River across from present-day Bismarck, North Dakota. However, just a few months later, in November, the name was changed to Fort Abraham Lincoln. The following year, Congress authorized the addition of a cavalry post and the fort was moved about five miles south on the river bluffs. Construction was mostly completed the same year.

In the fall of 1873, six companies of the 7th Cavalry arrived at the fort under the command of Lieutenant Colonel George A. Custer. Their mission was to further the advancement of the Northern Pacific Railroad and open the westward expansion of the American frontier. In addition to protecting the railroad, the troops accompanied the Yellowstone Survey Expedition of 1873.

The following year, in July 1874, Custer would lead an expedition into the Black Hills, an event that would change the history of the region.

With orders to explore the previously unknown region and locate a potential site for a new fort, Custer set out with a force of 1000 men, 110 wagons, and hundreds of horses, mules, and cattle. Unofficially, the Expedition was also to confirm or deny the rumored presence of gold in the Black Hills.

For the next two months, the expedition explored the Black Hills, finding gold in French Creek, near the present-day city of Custer, South Dakota. Wasting no time, Custer soon sent a telegram to General Alfred Terry, telling him not only about the beautiful valleys and flowing streams, but also advising him of their gold find:

“… gold has been found at several places, and it is the belief of those who are giving their attention to this subject that it will be found in paying quantities. I have on my table forty or fifty small particles of pure gold…most of it obtained today from one panful of earth.”

News of gold found in French Creek sent tens of thousands of miners rushing for the Black Hills over the next two years, giving birth to Deadwood and violating the 1868 Fort Laramie Treaty with the Sioux. Despite some attempts by the Army to hold back the flood of miners, the sheer numbers made it impossible. This, of course, inflamed the Sioux and soon led to the Black Hills Wars.

By 1874, Fort Abraham Lincoln housed three companies of the 6th and 17th Infantries and six companies of the 7th Cavalry, and included some 78 separate buildings, making it one of the largest and most important forts on the Northern Plains.

In the campaign against the Sioux, Custer and the 7th Cavalry set out from Fort Abraham Lincoln with Brigadier General Alfred H. Terry’s column in 1876 on their ill-fated expedition to the Little Bighorn. After the battle, Terry returned to the fort along with the wounded survivors of Custer’s regiment. 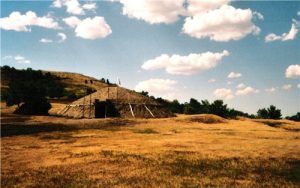 In 1877 the fort’s troops participated in the Montana campaign against the Nez Perce. When the Indians surrendered in October, the troops then escorted them from Fort Keogh, Montana to Bismarck, North Dakota.

The fort continued to be the headquarters of the 7th Cavalry until June of 1882 when they were transferred to Fort Meade, South Dakota. By the end of the 1880s, the railroad had been completed, most of the Indians had been confined to reservations, and local settlers were numerous. The Army evacuated the fort in 1891, by which time it was already falling into ruins and being dismantled by settlers. 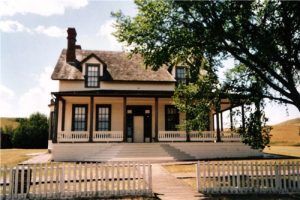