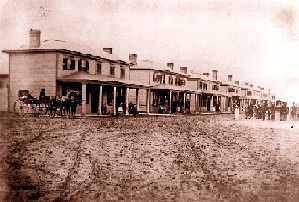 Fort Hays, Kansas, was established on October 11, 1865, as a frontier military post to protect military roads, defend construction gangs on the Union Pacific Railroad, and guard the U.S. mail. Also tasked with protecting the stage and freight wagons of the Butterfield Overland Dispatch, the soldiers defended travelers from Southern Cheyenne and Arapaho Indian attacks.

The post was first designated Fort Fletcher in honor of Governor Thomas C. Fletcher of Missouri. On November 17, 1866, the fort’s name was changed to Fort Hays, for Union Brigadier General Alexander Hays, who had been killed during the Civil War.

Located on Big Creek about 14 miles southeast of where Hays City would later be built, the post was situated on low-lying land along the creek. It was utterly destroyed by a flood that occurred in the spring of 1867, in which several Buffalo Soldiers lost their lives. The fort’s site was abandoned.

General Alfred Gibbs, then a major in the Seventh United States Cavalry, soon selected a new site by order of General Winfred Hancock. The new location was about ¾ of a mile from where Hays City would soon be established and comprised about 7,500 acres. Several substantial buildings were established, and in its early years, nearly 600 hundred troops were stationed there. General Philip Sheridan’s headquarters were at Fort Hays during the Black Kettle raid in 1868.

Some of the famous figures associated with the fort included Wild Bill Hickok, Buffalo Bill Cody, General Nelson Miles, General Philip Sheridan, and Lieutenant Colonel George Armstrong Custer. It was also the home of several well-known Indian War regiments such as the Seventh U.S. Cavalry, the Fifth U.S. Infantry, and the Tenth U.S. Cavalry. Their black troopers were better known as buffalo soldiers. After twenty-five years of service, Fort Hays was abandoned on November 8, 1889, after the Indian Wars had ended. The military reservation was transferred to the Interior Department on November 6, 1889, and the state by a Congressional act on March 28, 1900.

The original stone blockhouse, guardhouse, and officers’ quarters have been renovated. Displays through the historic site illustrate pioneer and military history. The museum was opened in 1967 and is administered by the Kansas State Historical Society. Part of the site is now the campus of Fort Hays State University.

Sentinel Hill Haunting — When a cholera epidemic hit Fort Hays, Kansas, in 1867, a young woman named Elizabeth Polly was among those who attended to and comforted the ill and dying. Some say she was a trained nurse, while others maintain she had no medical training. When she wasn’t working tirelessly with the sick soldiers, she was said to take a moment to stroll upon nearby Sentinel Hill.

Eventually, she too contracted the disease, and her dying wish was to be buried upon the hill. In the fall of 1867, she was given a full military funeral, but alas, the soldiers were unable to grant her last wish as the hill is composed of bedrock, so she was buried at its base. 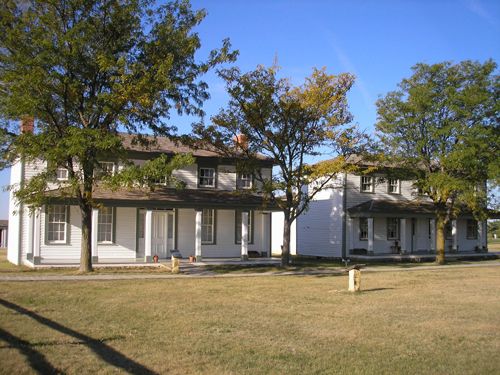 In 1905 Fort Hays was closed. The soldier’s bodies were moved to Fort Leavenworth, and the civilian bodies were placed in the Hays City Cemetery. Elizabeth’s body was left where it lay.

The first recorded report of her sighting was made by a man named John Schmidt in 1917, who reported seeing a woman dressed in blue walking across his farm towards Sentinel Hill. Following her, the apparition walked into one of his sheds, but when he arrived, no one was there, and nothing had been disturbed.

In the 1950s, a patrolman claimed to have hit a woman dressed in a long blue dress with a white bonnet with his patrol car. However, when the officer got out of the car, there was no woman and no damage to the vehicle.

Elizabeth’s ghost continues to roam the hill in her long blue dress and white bonnet. Purportedly, her ghostly spirit emits a blue light, and the locals began to call her the Blue Light Lady. The ghost of Elizabeth Polly has been seen many times over the years haunting the lonely hilltop that she had frequented so often in life.

Today there is a park at Fort Hays that honors her memory. In 1941, Elizabeth’s body was reportedly moved to the summit of the hill and in the 1960s a marker was placed at her gravesite that reads “The Lonely Grave.” 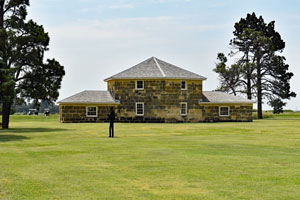 Access to the grave is difficult by car, and the last hundred yards or so must be covered by foot. Hays is located at the junction of Interstate 70 and U.S. Highway 183 in central Kansas. Fort Hays is now a state historic site southwest of town. Elizabeth’s grave sits at the top of Sentinel Hill just southwest of Old Fort Hays.