The Northern Pacific Railroad was chartered by the Federal Government on July 2, 1864, as the first northern transcontinental railroad in the United States. The federal charter and the completion of its mainline in 1883 were major factors in the opening of the northern tier of the United States. Operating primarily in the north-central region of the nation, the railroad served a large area, including extensive trackage in Idaho, Minnesota, Montana, North Dakota, Oregon, Washington, and Wisconsin.

The company was first headquartered in Brainerd, Minnesota when it was granted some 47,000,000 acres of land to building rail transportation to undeveloped territories. Like other start-up railroad companies, the Northern Pacific struggled with financing during its first few years, as the costs of building a railroad into a vast wilderness were drastically underestimated. Organizationally, it survived numerous financial upsets, takeovers, reorganizations, financial panics, and lawsuits, but finally, the final spike was driven in at Gold Creek, Montana on September 8, 1883.

For the next two decades the railroad continued to build tracks and grow and by the turn of the century was famous for its passenger service throughout the northern United States. By the 1950s, the Northern Pacific had almost 7,000 route miles in its system. However, after more than a century of operation, in March 1970, the Northern Pacific merged with the Chicago, Burlington, and Quincy Railroad, Great Northern Railway, Spokane, Portland and Seattle Railway, and their subsidiaries to become the Burlington Northern Railroad. 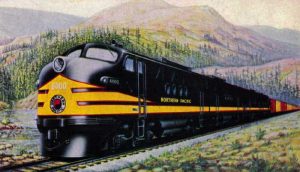