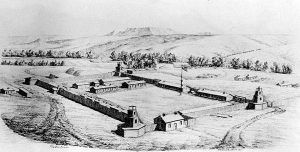 Fort Reno, Wyoming, situated on the Bozeman Trail in the Powder River country, was established in 1865. First called Fort Connor after the expedition’s commander, General Patrick Connor, cavalry troops built the fort, which consisted of a few crude log buildings and a stockade. Later, two companies of the Fifth U.S. Volunteer Infantry relieved the cavalrymen and served as the garrison until June 1866. In November 1865, the post was renamed Fort Reno.

In June 1866, Colonel Henry B. Carrington and the 18th U.S. Infantry relieved the volunteer units with plans to abandon the site and move the post further north on the Bozeman Trail. However, new orders soon arrived to keep the post active, and for the next two years, Fort Reno stood guard over its section of the Bozeman Trail and served as a way station and forwarding supply depot for Forts Phil Kearny and C.F. Smith.

Though the fort saw a few small Indian skirmishes in the area, the Indians saw the small post as little threat and focused on Fort Phil Kearny.

In the spring of 1868, the United States Government agreed to abandon the Bozeman Trail forts and close the trail to travel as part of the Laramie Treaty. The forts were abandoned that summer, starting with C.F. Smith, then Phil Kearny, and finally, in late August, Fort Reno. Soon afterward, Indians burned the fort buildings, and by the time General George Crook’s troops visited Fort Reno in 1876, all that was left were some adobe walls and building debris.

The original fort has returned entirely to nature today, but a large stone monument and several interpretive signs mark the site. Listed on the National Register of Historic Places, the site is located approximately 12 miles northeast of Sussex, Wyoming.