By General Wesley Merritt in 1890

Making war on Indians is unlike any other war-making in which armies engage. Finding them, not fighting them, is a difficult problem to solve. If the reader will consider that the theatre of operations in any Indian campaign whether in Wyoming, Dakota, the Indian Territory, and Texas, or Arizona is about as large as the New England States with New York added; that each of these possible theatres of war is an uninhabited wilderness; that they are without roads, and often impenetrable for hundreds of miles because of arid deserts or impassable mountain ranges; that while all parts of each territory are to the Indian as familiar as the paths of the home orchard are to the farmer and his children, it is and of necessity must be an unknown land to the best informed white man; that in these trackless wilds the Indian has no fixed habitation; that upon being discovered by his enemy the direction of the trail he takes is a matter of indifference to him; that where night finds him is his home, and that his subsistence and clothing are always with him – if all these and collateral matters depending on them are considered, an idea can be formed of how difficult it is to make successful war on the Indian.

In war the Indian, though partially civilized, reverts to his worst phase of savagery. Much has been written as to the false sentimentality which crops up in the discussion of the Indian question by humanitarians and lovers of fair play, which it is not intended here to repeat. But it may properly be observed that it is worse than nonsense to urge that the Indian regards the white intruders as the descendants of those who, two centuries and more ago, came to this country and by might deprived the Indians of their lands and hunting fields, and is through his children pursuing the red man toward the setting sun. The Indians’ knowledge of history scarcely extends beyond one generation. His white enemy is served in war as is any other enemy, and for the same reasons. He has no inherited animosities dating from the time of the Pilgrim Fathers, nor does he feel gratitude for kind usage shown to his ancestors or to himself. The annuities paid him are looked upon as tributes exacted by fear or some less worthy principle, and kindnesses shown him are evidences to his mind that those by whom they are shown are weak and afraid of him.

Fortunately for the whites, the Indians in their warfare are not in the habit of attacking our so-called forts on the frontier, else the horrors of past wars would equal in any year the fearful pictures of the Indian mutiny against the English. Our frontier forts have often been at the mercy of the Indians, but the capture in any instance could not have been made without great loss of life, and it is characteristic of the race that they are slow to attack when certain death awaits any great numbers. They are brave where superstitious beliefs make the chances of safety greatly in their favor, but will not take the risks that satisfy the civilized warrior.

The three consecutive years commencing with the Centennial year are remarkable for three of the most memorable campaigns against Indians known to our annals. The country will not soon forget the thrill of horror with which the news of the massacre of Custer and his command was received in 1876. An entire command of 15 officers and 232 enlisted men was annihilated, with not one left to tell the details of their destruction. All know the history of this sad affair: it is a thrice-told tale, with nothing to redeem it or palliate it as a disaster. It added only to the prowess. of the Indian, and forever saddened the lives of those who were left to mourn. 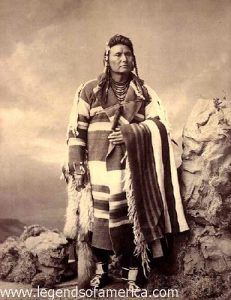 The next year, 1877, occurred the wonderful retreat and defense of Chief Joseph with the Nez Perce, pursued by General Howard and his command from Idaho Territory to Montana, a distance of more than thirteen hundred miles, along which, at different points, were intercepting forces, which hacked and cut at the Indians, till at last, reduced in numbers and equipment, they surrendered to an intercepting force, part of the original pursuers being present at the surrender. It was a wonderful pursuit, pluckily persisted in, in the face of every possible hardship; but who can do justice to the labor, courage, and endurance of the retreat? How in-tensely interesting would be an account from Chief Joseph, if he had the pen of a ready writer and could make his own report !his feints, stratagems, and ambuscades; the resolute marches in which he distanced his pursuers; his defense and passage of rivers, with all his impedimenta, including women and children; the meeting and battling with the intercepting forces, or the avoidance of these and escape across difficult and unknown country, until, finally deceived only in reference to the character of the country he was seeking and the friends he was to meet, he was finally brought to bay like a hunted lion, terrible even in his death struggles.

The year following, 1878, occurred another campaign, in regard to which less has been written, but which is none the less remarkable, as indicating the genius for war which is intended to deceive and defeat pursuit, for which the Indian has become so famous.

While General Howard was pursuing the Nez Perce and the intercepting forces were giving them battle or being deluded by their maneuvers, an extensive campaign in the departments of the Platte and Dakota was being waged against the Northern Cheyenne, which resulted in the capture of large numbers of them, nearly a thousand of whom were sent under guard to the reservation set apart in the Indian Territory. This met with great dissatisfaction from many of the Cheyenne, and they were not slow to show signs of discontent. To meet the possibilities of an attempt to escape, the order was given to take from the Cheyenne their arms and horses, but this order was rescinded when it was found that its enforcement was contrary to the terms of their surrender.

The army, often at heavy costs to itself, has habitually kept faith with the Indian. Many of the Cheyenne finding friends and kindred among the Southern Cheyenne, with whom they were quartered, settled down and became contented.

About one-third of them, however, under their Chiefs Dull Knife and Little Wolf, finally made their escape, notwithstanding that their designs had been suspected, and increased care had been taken to prevent it. In the night, early in September, about 90 men, 100 women, and more than 100 children left their lodges standing and went out into the darkness for a destination nearly a thousand miles away, on a road beset with foes, and pursued from the start by a force of cavalry little less than that of the warriors of the party. Without tentage or shelter of any kind, save what they could carry on their horses, at a season of the year when there are marked alternations in the temperature, the nights being cold and the days very warm, through a country one – half of which on their route was inhabited, though sparsely, by whites; with the railroads and telegraph at the disposal of their pursuers; burdened with about 250 women and children-this desperate band set out on their almost hopeless retreat.

The two troops of cavalry followed closely on their trail. Two other troops of cavalry were ordered from Fort Elliott, Texas, about 200 miles distant, to join in the pursuit, while the infantry garrisons of Fort Dodge, Kansas, Fort Supply, Oklahoma, and Fort Lyon, Colorado were ordered out along the Arkansas River to intercept or overtake the escaping band. Nor was this all. Allowing for the failure of the more southern cordon of interceptors, a second line of troops to watch for and cut off the escaping party was formed along the line of the Kansas Union Pacific Railway.

And lest all these should fail, further dispositions were made still to the north on the line of the retreat along the Union Pacific Railroad in Nebraska and Wyoming Territory, which the fleeing Indians must cross on the way to their journeys end.

The first news of the refugees was received just one week from the time of their escape. They were reported on Bluff Creek, near the Kansas line, about 200 miles from the point of departure, gathering and killing cattle for their subsistence. Just five days after the Cheyenne were located on Bluff Creek a force of some 200 men, including some 50 citizens, came up with the Indians on Sand Creek, Colorado and had a skirmish with them about dark.  Three days after this first skirmish the trail of the Cheyenne was found east of Pierceville, about seventy-five miles beyond Sand Creek, showing they had crossed to the north of the Arkansas River. Thus the hope of intercepting them on this river had vanished.

As soon as this had been satisfactorily arrived at, Colonel Lewis took the field from Fort Dodge with such detachments of troops as were at hand. The only cavalry he had were two troops which had just joined him, marching since September 20th from Fort Elliott, in Texas, heretofore mentioned. Colonel Lewis marched rapidly from Fort Dodge in a north-westerly direction, and at the end of two days overtook the fugitives on a tributary of the Smoky Hill River. In the meantime, he had come up with three troops of cavalry. The Indians were strongly entrenched and evidently ready for battle.