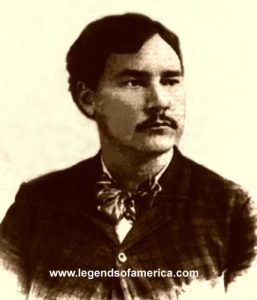 William “Billy” Bailey, aka Bill Wilson, William Baylor (18??-1871) – A lawman and cowboy, Bailey was working in Newton, Kansas when he was killed by Mike McCluskie, which prompted the famous Hyde Park Gunfight.

A.R. Baker – A lawman, served as a Texas Ranger under Captain Frank Johnson in 1906.

J.H. Baker – A lawman, Baker served in Company C of the Texas Rangers around 1907.

Andrew “Andy” W. Balfour (or Belfour) (18??-1891) – A Deputy Sheriff in Kiowa County, Kansas, Balfour was tracking Zip Wyatt, who had shot up the town of Mulhall, Oklahoma, in June 1891. Having wounded two citizens and with a warrant out for his arrest, Wyatt fled to Kansas, where he stole some riding gear in Greensburg, in Kiowa County, in July. Balfour tracked Wyatt to Pryor’s Grove about ten miles north of Greensburg, where he attempted to arrest the fugitive, only to be shot in the abdomen, with the bullet striking the officer in the spine and killing him. However, the deputy rallied before he died, shooting Wyatt twice, but only wounding him slightly in the hand and on his left side. Deputy Sheriff Balfour left a wife and six children. In the meantime, Wyatt escaped to return to Oklahoma, formed a gang, and terrorize the territory for the next several years. He was finally captured after a gunfight, in which he was wounded and died in jail in Enid, Oklahoma. 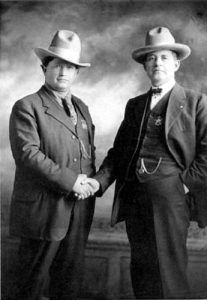 William “Bill” Dudley Banks – U.S. Deputy Marshal commissioned in Oklahoma Territory and assigned by Marshal Evett Nix to the Cheyenne District on July 15, 1893. In 1894, Deputy Bank rode with Heck Thomas, Bill Tilghman, and Chris Madsen to apprehend the Bill Doolin Gang but were unsuccessful. In February of 1895, Banks rode with several other deputies in pursuit of outlaws Jim Harbolt and Dan McKenzie, who were charged in the murder of Canadian, Texas Sheriff Tom McGee, who was killed on November 24, 1894, during a robbery. Banks and the other marshals were successful in apprehending the two outlaws. After the Doolin Gang robbed the Rock Island train at Dover, Oklahoma, Banks and other officers pursued them once again. The officers caught up with the gang about 30 miles west of Hennessey, Oklahoma, where a gunfight erupted. Banks killed outlaw “Tulsa Jack” Blake in the melee and collected the reward. The following year, in July 1895, Banks and numerous lawmen from various jurisdictions participated in the manhunt for notorious outlaws Zip Wyatt and Ike Black. In July 1898, Banks rode with U.S. Deputy Marshals Alberty and Dobson when they killed Bill Nail of the Moose Miller Gang.

W.H. Barbee – U.S. Deputy Marshal commissioned in the Western District at Fort Smith, Arkansas, on December 14, 1891, by Marshal Jacob Yoes. By 1895, Barbee was living in Braggs, Oklahoma. In April 1895, outlaws Sam “Verdigris Kid” McWilliams, George Sanders, and Sam Butler, who were wanted for robbery and murder, rode into town, ordering everyone to put up their hands. The trio of outlaws quickly marched their prisoners to Madden General Store, and when the store clerk panicked and ran into the street, the outlaws shot him down. As their hostages stood waiting, the thieves robbed the general store and exchanged their clothing and boots for new ones. One of the hostages was then sent to bring a horse to the store, exchanging it for one of theirs.  Fortunately, the store owner was not present but could see the robbery taking place and quickly reported it to two law officers, one of which was U.S. Deputy Marshal Barbee. When the two officers arrived, they shot the Verdigris Kid, and Deputy Marshal Barbee opened fire on the rest of the gang. George Sanders was also killed, and Sam Butler, though wounded, escaped.