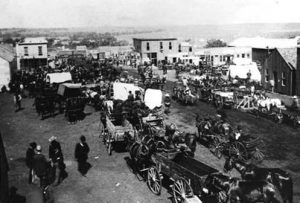 One of the most notorious outlaws in the Territory of Oklahoma was Zip Wyatt, who also went by the names of Dick Yeager and Wild Charlie.

Born as Nathaniel Ellsworth Wyatt in Indiana in 1864 to John T. and Rachel Quick Wyatt, he was the second born of 8 children, which included seven boys and one girl. The family moved around a lot before finally settling about 14 miles northeast of Guthrie, Oklahoma, in 1889.

The family was poor, his parents almost illiterate, and Nathaniel Wyatt came by his bad habits legitimately as his father, known as “Old Six-Shooter Bill,” was frequently arrested in Guthrie for drunkenness and disorderly conduct. His older brother, known as “Six-Shooter Jack,” was a known professional gambler who would be later killed in a saloon in Texline, Texas, in 1891.

Somewhere along the line, Nathaniel acquired the nickname of “Zip” from a man who lived near Fort Smith, Arkansas, and was best known throughout his life by that moniker or by his alias, Dick Yeager.

Zip’s mother, Rachel, died in February 1890, and the following year, Zip married a woman named Annie Bailey near Mulhall, Oklahoma. The pair had one daughter. However, life for his wife and child would be far from “normal,” as on June 3, 1891, Zip shot up the town of Mulhall, wounding two citizens, and fled north to the Cherokee Outlet before making his way to Kansas.

With a warrant out for his arrest, Zip made his way to Kiowa County, Kansas, where he stole some riding gear in Greensburg. Deputy Sheriff Andrew Balfour soon tracked down the outlaw to Pryor’s Grove, Kansas, about ten miles north of Greensburg, where he attempted to arrest the fugitive, only to be shot in the abdomen, with the bullet striking the officer in the spine and killing him. However, the deputy rallied before he died, shooting Wyatt twice, only wounding him slightly in the hand on his left side. Deputy Sheriff Balfour left a wife and six children.

With yet another warrant on his head and a $1,000 reward for his capture, Zip fled to his native Indiana, where he hid with relatives. Several months later, however, he was apprehended and after a lengthy extradition proceeding, Zip was returned to Guthrie, Oklahoma, to face charges on his spree in Mulhall. The outlaw was able to escape from jail once but was quickly recaptured. Undaunted, he tried again on December 31, 1892, and this time, he was successful.

He soon joined up with Ike Black, and the two formed a gang, making numerous robberies in the area, including the robbery of the Hightower Store and post office in Arapaho, Oklahoma, in November 1893. As Black and Wyatt hid in the Gypsum Hills, their wives often aided them, bringing food and supplies. The gang was soon blamed for almost every crime committed in the territory, and a reward was placed on Wyatt’s head of $5,000 for his capture.

On January 20, 1895, Fred Hoffman, the treasurer of D County (now Blaine County), Oklahoma, was killed, and though it could never be proven, the gun that killed the treasurer was reportedly traced to Zip Wyatt.

Around this same time, Zip Wyatt and Ike Black were thought to have joined up with the Doolin-Dalton Gang, participating in the Rock Island train robbery in Dover, Oklahoma, on April 3, 1895.

On June 3, 1895, an outlaw gang robbed the store and post office at Fairview, Oklahoma, taking everything of value and three horses. U.S. Deputy MarshalsGus Hadwinger and J. K. Runnels, Woods County Sheriff Clay McGrath, and Deputy Marion Hildreth quickly pursued the outlaws. Catching up with the robbers the following day, they surprised the gang, hiding in a cave near the county line. In the ultimate gunfight that broke out, Ike Black was hit in the foot, and Zip took a shot in the left arm, but the outlaws escaped. The pressure continued from the lawmen, which now numbered almost 200 looking for the pair.

On July 26, the outlaw pair robbed the Oxley, Oklahoma, post office and store but only gained about $35 and some supplies. However, during this robbery, they were recognized, and the next day a posse went after them, tracking them to a site near Salt Creek, about six miles northwest of Oxley. When gunfire erupted once again, Black received a flesh wound to the head, but both men were able to escape once again; however, their horses had run off, and they were now afoot.

The following day, they had made their way to a farm about five miles west of Okeene, Oklahoma, where they stole some horses and a cart. Another posse was formed, led by Robert Callison, the constable of Forrest Township, and the men again went after Black and Wyatt.

Tracking them to a canyon on July 28, the guns blazed again, and posse member Frank Pope was shot in the right leg. However, the “lucky” outlaws were able to escape. By this time, the original posse was joined by another from Alva, Oklahoma, led by Deputy Sheriff Hildreth, who pursued the fugitives southeast.

Black and Wyatt took refuge in a shack about four miles east of Cantonment (present-day Canton), and when the posse caught up with them on August 1, Black was shot in the head and killed. Zip was also shot in the left side of his chest but escaped the posse. He then headed to a doctor’s house a mile away and forced the doctor to give him a horse and tend to his wound. Riding off on the horse for about seven miles, the wounded Wyatt soon let the horse go as the pain of his chest wound was too intense. He then waylaid a small wagon near Homestead, forcing the young driver to take him some 25 miles northeast. After crossing the Cimarron River, he let the boy go and continued in the cart.

On the afternoon of August 3, Zip was spied crossing the Rock Island railroad at Waukomis, just five miles south of Enid. When Garfield County Sheriff Elzie thralls got word of Zip’s location, he put together a posse and went after the desperate bandit. Zip deserted the horse and cart about miles east of the railroad at Skeleton Creek Valley and again traveled afoot. That evening, Wyatt came across a small cabin owned by John Daily and ordered the owner to provide him with a horse and come with him. Later, Wyatt let Daily go, and the freed man quickly raised the alarm about Zip’s last known location. 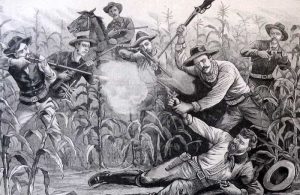 The dawn of the following morning on August 4, a final posse from the Anti-Horse Thief Association from Sheridan, Oklahoma, went after the elusive outlaw. By 10:00 a.m., they were joined by another posse from Enid. Tracking Wyatt to a site about five miles southeast of Marshal, the men split up and surrounded the outlaw. When the deputies ordered the outlaw bandit to throw up his hands, Wyatt went for his gun, and Deputies Ad Polk and Tom Smith fired on him, striking him once in the pelvis and once in his stomach. Finally, Zip Wyatt surrendered. The outlaw was then taken to a church in Sheridan, where he was treated by two doctors. That same day, Zip was transferred to Enid and jailed. John Daily and the Sheridan posse would split the reward for his capture.

Local doctors intervened as various jurisdictions argued over where Wyatt would be tried, telling authorities that Zip was a dying man. However, for the next three days, Wyatt would “hold court” in his jail cell as numerous people came to see the now-infamous outlaw. Enjoying the attention, Wyatt boasted of having killed eleven men and getting away with numerous crimes.

When John T. Wyatt, Zip’s father, arrived to visit him on August 7, he told reporters that his son was 24 or 25 years old, had not participated in the Doolin Gang robbery in Dover, Oklahoma, and had never been a regular companion of either Bill Doolin or Bill Dalton. Zip Wyatt continued to linger in the jail, pumped up on morphine for his pain until he was reduced to little more than a skeleton by the end of August. He finally died on September 7, 1895.

The following day, his sister, Mrs. Pricket, appeared to claim his effects but not to claim the body. However, the sheriff refused to turn over his personal possessions. On September 9, 1895, Wyatt was buried in a cheap pine coffin, without a marker, in a pauper’s field south of the city without a funeral nor any family members present.

Years later, many of the bodies in the old cemetery were moved, but Wyatt’s was already lost and remained where it was, in what is today a residential development in Enid.