Benjamin Elias Cabell (18??-1888) – U.S. Deputy Marshal commissioned in the Western District at Fort Smith, Arkansas. In July 1888, Ben was dispatched to pick up six prisoners that officer John Phillips had in his possession when he was killed by an outlaw named Dan Barnett in Eufaula, Oklahoma.

Bill Caine (18??-1893) – U.S. Deputy Marshal commissioned in the Southern District of Indian Territory at Paris, Texas, under Marshal Sheb Williams. He was shot and killed in April 1893 while attempting to arrest Bud English, a prominent stockman near Woodville, Chickasaw Nation. Caine was with a posse tracking a gang of horse thieves that included Bud English when the outlaws resisted arrest, and a gunfight ensued. Years later, one of the posse members recognized Bud English on the streets of Ardmore, Oklahoma, and identified him as the man who had killed Caine. Bud English was arrested in Ardmore, nine years after Caine’s murder.

James Cairns (1851-1934) – Born in Scotland in 1851, Cairns immigrated to the United States somewhere along the line and lived in Indiana in 1871. From there, he moved to Kansas and, in 1875, began to work as a peace officer in Wichita, Kansas. In the same year that Cairns was hired, so was a young Wyatt Earp. Both policemen made $60.00 per month. In 1879, he became Wichita’s town marshal, a position he held for the next eleven years. Cairnes was also the brother-in-law of the famous Bat Masterson, having married Bat’s sister, Nellie.

A. J. Caldwell – U.S. Deputy Marshal, commissioned on June 12, 1893, in the Western District at Fort Smith, Arkansas serving under Marshal George Crump. On May 5, 1894, he was working with Officer Tucker when they arrested Poley Empson for the murder of Dave Buchanan, a U.S. Deputy Marshal and Indian Policeman. 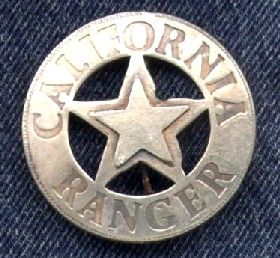 California State Rangers – California’s first statewide law enforcement agency, the Rangers were formed in 1853 when the legislature authorized a body of some 20 men to kill or capture the Mexican bandit Joaquin Murrieta and his gang called the Five Joaquins. Led by former Texas Ranger Captain Harry Love, the men tracked down the gang and allegedly killed Murrieta and his right-hand man Manuel Garcia, known as “Three-Fingered Jack.” Later, the Rangers were disbanded; however, Captain Love and another ranger stayed on at the State Capitol and helped to form the California State police. Over the years, the organization was reorganized several times and was eventually merged with the California Highway Patrol in 1995.

Harry H. Callahan  – U.S. Deputy Marshal commissioned in the Fourth District of the Texas Eastern District in 1893. Harry lived near Hominy, Oklahoma, and worked the Osage country with Deputy Marshals Lee Taylor and Charles Douglas. In April 1894, Callahan was involved in a gunfight with several other deputies when they tried to arrest six outlaws southeast of Pawhuska, Oklahoma. Callahan killed outlaw tom Crook during the fray, and the posse captured the others. In August of 1896, Harry and his posse were involved in a running gunfight with the Doolin Gang. During the shooting fray, one of the outlaws was shot but was carried off when they made their escape.

George Washington Campbell (1850-1881) – Deputy in Clay County, Texas; cattle detective in New Mexico; and City Marshal in El Paso, Texas briefly. Born on December 23, 1850, in Greenup County, Kentucky, Campbell’s father died six months before he was born, and his mother died when the boy was just nine. His relatives then raised him and his three brothers and a sister. By 1875, Campbell had moved to Montague County, Texas, where he worked as a cattle ranch cook. However, the following year, he lived at Henrietta, Texas, where he became a deputy under Sheriff John T. Craig. Working as a lawman, he soon earned a reputation for bravery and honesty. On May 15, 1880, he accepted a job as a detective for a cattle raisers’ association in New Mexico. Traveling throughout the state, he was in El Paso, Texas, and was offered a position of El Paso City Marshal by the end of the year. However, as the salary was either too low or went unpaid, he resigned in January 1881. Unfortunately for Campbell, he inadvertently got involved in a gunfight, often referred to as the Four Dead in Five Seconds gunfight, and was shot by El Paso City Marshal Dallas Stoudenmire on April 14, 1881. Campbell died the following day.

J.E. Campbell – Campbell was a sergeant in the Arizona Rangers in 1903.

Rufus “Rufe” Cannon – U.S. Deputy Marshal, commissioned on September 15, 1892, in the Western District at Fort Smith, Arkansas serving under Marshal Jacob Yoes. Cannon was one of the most important black lawmen of the Oklahoma territorial era.

B.P. “Bat” Carr – Primarily a gambler and businessman, Carr was made city marshal of Caldwell, Kansas, and made the mistake of hiring Henry Newton Brown as a deputy. Brown would rob a bank, kill a man, and be hanged.

T. Jeff Carr – The first sheriff of Laramie County, Wyoming Territory, in 1869. He made Wild Bill Hickok check his guns in Cheyenne and, in 1876, arrested Jack McCall, the man who shot Hickok. Later served as a U.S. Deputy Marshal for Wyoming.

William H. “Bill” Carr (18??-19??) – U.S. Deputy Marshal commissioned in the Western District Court at Fort Smith, Arkansas in 1887. Though he had a solid service record, he was accused of assisting the outlaw Christian brothers from escaping jail in Oklahoma City and spent the rest of his life hiding.