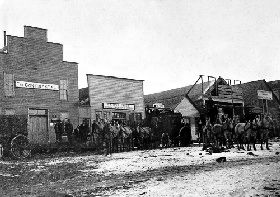 George Bravin was born in Devon, England in March 1860, the 13th child of Richard and Catherine Bravin. His father died when he was three years old. By the time he was just nine years old, he was dependent upon his own resources and worked at a number of jobs.

When he was 18, he immigrated to the United States and began to roam the West. He first settled in Cripple Creek, Colorado, where he worked as a miner for a time, before moving southwest to Tombstone, Arizona in 1882.

Once again, he was employed in the mines of Tombstone until 1888, when he was almost asphyxiated in one of the mines. That same year, he married a 19-year-old local girl named Mary Ellen Butler, who just happened to be the daughter of another British immigrant. The couple would eventually have ten children. For a couple of years, Bravin ran a livery barn and invested his money wisely into a number of mining claims.

In 1891, Bravin, who had a friendly disposition that earned him many friends in Tombstone, was elected county assessor and also purchased the Arcade Saloon on Allen Street. Three years later, in 1894, though he certainly didn’t look the part of a lawman, but rather, more like a schoolmaster, he took the position of deputy sheriff. Working hard at the position, he quickly gained the respect of the locals.

The following year, on September 25, 1895, he was appointed as a U.S. Deputy Marshal and in 1896 was working as the first elected constable in Pearce, Arizona. Though the new mining camp, east over the Dragoon Mountains, was never as tough as Tombstone, Bravin was determined that it wouldn’t be. He soon hired a tough deputy to work with him – Burton Alvord. At this time, Alvord had not yet turned to his lawless ways and had a reputation as a solid lawman. However, just six months later, Bravin thought there was no longer a need for the tough deputy and let him go. Little did he know that the two would meet again under far different circumstances.

Alvord moved on to Willcox, where he worked as a deputy constable once again and gained a reputation as both a killer and an alcoholic.  Alvord would further change his ways by the turn of the century, partnering up with Billy Stiles and forming the Alvord-Stiles Gang, who began by rustling cattle but soon advanced to robbing trains.

In the meantime, Bravin returned to being a lawman in Tombstone. In 1900, the Alvord-Stiles Gang attempted to rob a Fairbank train, but instead, ran into tough lawman Jeff Milton. Alvord was arrested and taken to the Cochise County Jail, where he came face to face with his former boss, George Bravin.

On April 7, 1900, as Bravin had some 25 prisoners housed in his jail, Billy Stiles went to visit Alvord and other gang members who were in the jail. He then held a gun to Bravin demanding the release of all of the prisoners and ended up shooting the lawman taking off two of his toes. The prisoners, including Alvord, then escaped.

Bravin continued his duties as a lawman and on June 20, 1908, was involved in a gunfight with a Mexican man named Marcello Mendez. When the shooter blasted a local woman three times, the shots brought Bravin and another constable named Kelly running. Searching for the shootist, they found him hiding under the bed and as the lawman crouched down, the shots rang out again. Though the men received only powder burns, Mendez was hit in the head and the heart. The woman who had been shot survived. 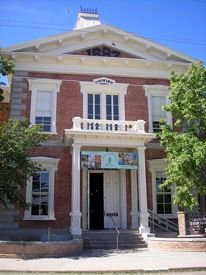 For the next nine years, Bravin continued to serve as a Tombstone lawman until at the age of 55, in 1917, he became ill and entered the hospital in Douglas. He never recovered and died at his daughter’s home in Douglas on October 21, 1918. His body was returned to Tombstone where his funeral was one of the largest ever held. He was buried at the Tombstone Cemetery (not Boot Hill.)