Neeley Factor – U.S. Deputy Marshal assigned to the Central District of Oklahoma. When Factor, along with Zeke Miller and a posse tried to arrest a gang of outlaws near Adamson, Oklahoma, a gun battle erupted, but when the gang found themselves outnumbered, they finally surrendered and were taken to the Fort Smith federal jail.

William “Billy” B. Fain, aka: Billy Profane (1856-1929) – Born in Tennessee, Fain moved to California in 1883. A tough and rugged man with a forceful manner of speaking, he soon gained the nickname, “Billy Profane.”  In 1884, he killed his own uncle, James C. Fain, but the killing was ruled self-defense. While living in the Warner Springs area of San Diego county, he got into a dispute with the Helm brothers and in 1887 a shootout occurred between Fain and Chat Helm. Though Fain was tried twice on assault to murder charges, he was later cleared and moved on to Oak Grove, California. There, he was elected constable, a position he held until July 1890. He then moved on to Yuma, Arizona, where he married, raised a family, and lived until his death on March 20, 1929.

Philip Fall – The brother of gunman Albert Fall, he was a cattle rustler and outlaw who later became a deputy marshal.

H. D. Fannin – U.S. Deputy Marshal commissioned in the Western District at Fort Smith, Arkansas. After Fannin had arrested a man named Jason Labreu in 1883, for the rape and murder of a woman, Labreau escaped on the way to Fort Smith, Arkansas and was killed by Fannin. Later that same year, Fannin was one of the deputy marshals that helped capture Johnson Jacks, who had been charged with the killing of U.S. Deputy Marshal Addison Beck. 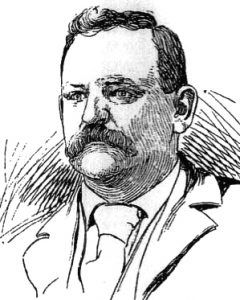 Edward J. Farr (1867-1899) – Born on November 22, 1867, at Kerrville, Texas, he later moved to New Mexico with his older brother, Jeff. Later, both men moved to Huerfano County, Colorado, where Edward was elected sheriff in 1898. It was during this time that the Ketchum Gang was roaming the area robbing trains, banks and post offices. On July 11, 1899, Sam Ketchum, Will Carver, and Elza Lay pulled a heist without their leader, Thomas “Black Jack” Ketchum in Folsom, New Mexico. Though the bandits made off with some $50,000, they were quickly pursued by a posse, which included Sheriff Farr, to a hideout in Turkey Canyon, near Cimarron, New Mexico. On July 16th, the posse caught up with the bandits which quickly resulted in an all-out gun battle. when it was over, Sheriff Farr had been shot three times and killed. Also seriously wounded was posse man, Henry M. Love of the Colfax County, New Mexico who would die of his wounds on July 21st. Of the gang, Sam Ketchum was hit and taken into custody, where he died on July 24th. Also, hit was Elza Lay, but he and  Will Carver were able to make their escape. Lay was caught up with in August and sent to prison. Carver would later be killed two years later by Texas by lawmen.

Jefferson “Jeff” Beauregard Farr (1862-1920) – The older brother of Edward J. Farr, was born in Kerrville, Texas and when he grew up moved to New Mexico. Later, his younger brother Edward joined him and the pair made their way to Huerfano County, Colorado, where Edward was elected sheriff in 1898. Jeff went to work for his brother as a deputy sheriff and when Edward went after the Ketchum Gang in July 1899, he left Jeff in charge. Unfortunately, Edward was killed by the gang near Cimarron, New Mexico on July 16th. Jeff then became sheriff, a position he retained until 1917. He then worked as a rancher and cattleman.

John Gist Farr (1847-18??) – A Choctaw Indian, originally from South Carolina, Farr served as  U.S. Deputy Marshal for at least eight years in the Chocktaw Nation of Indian Territory after relocating there in 1875. He was first commissioned in March 1889 and lived in Antler, Oklahoma.

Sam Farris (18??-1894) – While serving as a Canadian County Deputy Sheriff in Oklahoma Territory, Farris recognized two outlaw brothers named James and Victor Casey in Yukon, Oklahoma on May 21, 1894. The Caseys were suspected of murdering two men near El Reno earlier in the month and when Farris confronted them, the brothers shot the deputy. However, Farris returned the fire, wounding Vic Casey in the foot before he died. Vic Casey would later develop blood poisoning from the wound and die on November 12, 1894. His brother Jim was later arrested and placed in jail in Oklahoma City. On June 30, 1895, when he tried to escape the jail with the Christian brothers, he was killed.

William Faulkner – U.S. Deputy Marshal commissioned out of the federal court in Van Buren, Arkansas serving under Marshal William A. Britton. In 1868, William arrested Amos McCurtain, a murderer and the last man to be hung at Van Buren on June 24, 1870

John F. Fields (18??-1892) – A half-blooded Cherokee Indian, Fields was commissioned as a U.S. Deputy Marshal in the Western District at Fort Smith, Arkansas. In June 1885 Fields was riding with Sam Six Killer to a murder scene near Fort Gibson, Oklahoma where notorious outlaw Dick Glass and his gang of rustlers killed a man named William Cobb and seriously wounded another named Alex Cowan. The deputies trailed Dick Glass and his outlaw buddies to about five miles south of Emet, in the Choctaw Nation where Glass was killed in a shoot-out by Sam Sixkiller. In October 1892, when Fields rode with a posse to arrest Cherokee outlaw Ned Christie, he would not be so lucky. On October 19th, as a posse approached Christie’s cabin ordering the fugitive to come out, Christie came out of his cabin with his guns blazing.  Fields received a fatal gunshot to the neck, another deputy was wounded and the posse retreated.

William Fields (18??-1887) – A full-blooded Cherokee Indian, Fields was commissioned as a U.S. Deputy Marshal in the Western District at Fort Smith, Arkansas in early 1887. At the same time, he was also appointed to act as the City Marshal of Tahlequah, Oklahoma, the capital of the Cherokee Nation. Shortly after his appointment, he attempted to arrest a Choctaw Indian named Cash Ellis, who had allegedly killed a black man named Busby. However, Ellis was not to be taken in without a gunfight and wound up with both legs riddled with bullets. The next time, Fields would not be so lucky. On the afternoon of April 10, 1887, he and an African-American deputy named Crowder Nix, were attempting to arrest James H. Cunninus near Eufaula, Oklahoma for robbing a railroad boxcar. The fugitive; however, began to flee and in a running gun battle, Fields was killed by Cunninus. Crowder; however, returned the fire, wounding the fugitive and taking him into custody.

Edward D. Fink – U.S. Deputy Marshal commissioned in El Reno, Oklahoma Territory in January 1895 under Marshal Evett Nix. He later worked out of the Western District of Indian Territory, serving under Marshal Leo Bennett and assigned to Wetumka, Oklahoma. In December 1902, while attempting to arrest two outlaws named Tunnels and Clark near Wetumka, he was overpowered and received a pistol-whipping that left him unconscious. Two years later, on November 20, 1904, he would not be so lucky when he attempted to arrest Indian outlaws, Jim Tiger and Peter Fish.  Pursuing the fugitives on horseback to the Eufaula area, he ordered them to halt when Fish turned in his saddle and fired his Winchester rifle killing the deputy.  The killers were later apprehended by U.S. Deputy Marshals Grant Johnson and Bud Ledbetter, tried and Fish received life imprisonment for Fink’s murder.