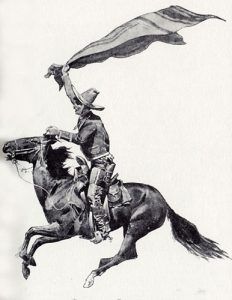 The Flores-Daniel Gang, led by Juan Flores and Pancho Daniel, raided southern California, stealing horses, cattle, and robbing travelers along the roadways, sometimes leaving their victims dead. Though regarded by white settlers and thieves and outlaws, they were considered among Mexican-Americans as folk heroes who were defending their rights and fighting American oppression, much the same as had Tiburcio Vásquez and Joaquín Murrieta a couple of years before.

Juan Flores, who had been arrested and sent to San Quentin for stealing horses, escaped in October 1856 and soon hooked up with outlaw, Pancho Daniel, and recruiting a number of other area Hispanics, including  Anastasio García, Espinoza, Andrés Fontes, Chino Varelas, Faustino García, Juan Cartabo and “One-eyed” Piguinino, formed a gang called the “las Manillas” (the Handcuffs), better known as the Flores-Daniels Gang. The outlaw then began to raid the areas of San Luis Obispo and San Juan Capistrano, and grew to over 50 men who rustled cattle, committed armed robbery, and murder of white settlers.

In January 1857 the gang made a raid on San Juan Capistrano, looting several shops and killing a shopkeeper and an assistant. Afterward, they continued to loot the town as they celebrated in a drinking spree. Soon, Los Angeles County Sheriff James R. Barton rounded up a posse to go after the outlaws.

On January 22, 1857, Barton, along with Deputies William H. Little, Charles K. Baker, Charles T. Daly, and three other men set out to capture the notorious Flores-Daniel Gang, who had recently raided the town of San Juan Capistrano. The posse headed south, resting for the night, before stopping for breakfast at the main house of the Rancho San Joaquin southwest of the present-day Santa Ana. Owned by Don Jose Sepulveda, the ranch owner warned the men that they were extremely outnumbered and should get reinforcements before continuing their pursuit. However, Barton and his men ignored the warning and continued on. 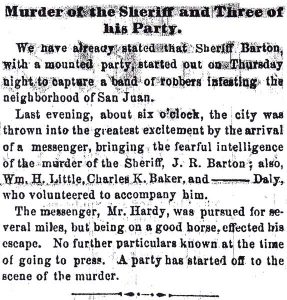 After traveling about 12 miles south, they were ambushed by gunshots in a canyon. They tried to return the fire, only to discover that someone (thought to have been a ranch servant) had removed the ammunition from their weapons. Unarmed, the lawmen began to flee, but Sheriff Barton, Constable Charles Baker, Deputy Charles Daly, and Constable William Little were shot and killed, the first lawmen in Los Angeles County to lose their lives in the line of duty. The other three men were able to escape to tell of the ambush. Within two hours, another posse was formed of some 60 men, who once again went after the outlaws. Under the leadership of James Thompson, who would later become Los Angeles County’s new sheriff, the posse found the mutilated bodies of the four officers. With renewed enthusiasm, the posse continued the search for the outlaws, arresting 52 of them. Another posse, led by General Andres Pico, immediately lynched two of the most notorious of the gang when they came upon them.

Housed in the county jail, eleven of the men were eventually hanged, including Juan Flores on February 14, 1857. Pancho Daniel, who had eluded arrest, was captured the following year and was hanged on November 30, 1858. Before it was all said and done, more than 100 gang members were either captured or killed in the pursuit.