William “Billy” Bailey, also known as Bill Wilson, and William Baylor was a lawman and cowboy, who was thought to have been from Texas before winding up in Newton, Kansas in 1871.

A career cowboy, and sometimes lawman, he probably wound up in the Kansas cowtown after a cattle drive. Though he was reportedly easy-going and even-tempered, he also had a reputation as a gunfighter. having known to have been in three gunfights, where he killed two men.

During the August elections of 1871, Bailey was hired by the Newton authorities as a Special Policeman to help keep order. On August 11th, he and another Special Policeman by the name of Mike McCluskie argued over local politics in the Red Front Saloon. The dispute soon turned violent and Bailey was knocked outside the saloon into the dusty street. McCluskie followed, drew his pistol, and fired two shots at Bailey, hitting him in the chest. The wounded man died the next day.

McCluskie immediately fled town to avoid arrest, but returned just a few days later, after he heard that the shooting would most likely be deemed self-defense. Though Bailey never produced a weapon, McCluskie claimed he feared for his life, because of Bailey’s reputation as a gunfighter. In no time, Bailey’s Texas cowboy friends vowed to revenge his death which ultimately led to the famous Hyde Park Gunfight on August 19, 1871. 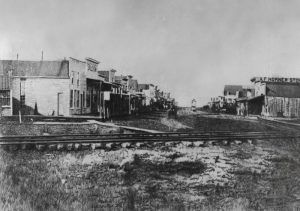