Sheppard Busby was a U.S. Deputy Marshal commissioned in the Western District of Arkansas.

Busby was born in Wayne County, Kentucky, to Steven Sheppard and Mary Polly McIlwaint Busby in 1833.

During the Civil War, he fought for the Union with the 56th Illinois and 50th Missouri regiments. Following the war, he moved to Stoddard County, Missouri, until the early 1880s when he relocated to the Cherokee Nation in Indian Territory.

Shortly afterward, he and his wife took in a 12-year-old orphan girl named Tennessee Burns. His wife died in about 1884. Then, Shepard married 22-year-old Louiza Bolin, with whom he had an on-again-off-again relationship.

On August 28, 1889, Busby took an oath to become a U.S Deputy marshall out of Fort Smith, Arkansas, for Judge Isaac Parker. Busby was assigned to the Cherokee Nation of Indian Territory. Busby was known as a good officer for several years and made several arrests, including robbers Gordon Sanford and Lewis Maddox and murderer Dick Anderson.

At some point, Busby separated from Louiza Bolin, and in March 1891, 15-year-old Florence Jones described as his “fiancé” came to live with him. Also living in the home was his 23-year-old son William and Tennessee Burns, whom he and his first wife had taken in years earlier. By this time, Tennessee was 22 years old and a mother to two of Shepphard’s young children. 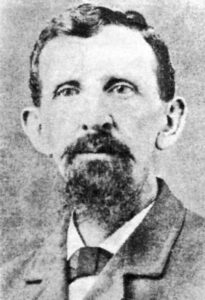 On August 19, 1891, U.S. Deputy Marshal Barney Connelly went to Busby’s home on Lee’s Creek near present-day Muldrow, Oklahoma. With a warrant of arrest for adultery, Busby, along with his son, resisted and fired on Connelly, killing him.

After hearing four shots, witnesses approached the scene to find Marshal Connelley dead and Sheppard Busby fleeing into the woods. Late on the night of the 19th, word arrived in Fort Smith that Connelley had been killed, and a posse of deputies rode to the scene.

After recovering Connelley’s body, Busby’s son told them that the elder Busby had disarmed the deputy and killed him with his own gun. The officers doubted this story because Busby was almost 60 and reportedly frail, while Connelly was younger, stronger, larger, and had a reputation for being careful during his arrests. William Busby was arrested for assisting in Connelly’s murder. Sheppard turned himself about a week later, saying he was tired of running.

During his trial, Busby attempted to use the defense that he didn’t know Connelly was an officer when he killed him. However, the jury was convinced he must have known Connelley since they served as deputies at the same time. Busby was convicted on December 10, 1891, and sentenced to death. His son was convicted of manslaughter and sentenced to serve ten years in the Detroit Federal House of Corrections in Michigan.

Busby was hanged in Fort Smith, Arkansas, on April 27, 1892. At the time of his death, he was the oldest prisoner to be executed on the Fort Smith gallows. Since Busby was a member of the Grand Army of the Republic, an organization for Civil War veterans of the Union Army, Judge Parker’s regular hangman, George Maledon, also a member of the organization, refused to act as his executioner. Maledon was temporarily replaced by Deputy Marshal G.S. White, and the execution went forward.

Sheppard Busby was buried in the potter’s field section of Oak Cemetery in Fort Smith, Arkansas. Busby was the oldest man and the only U.S. Deputy marshal to be hanged on the gallows of Fort Smith.