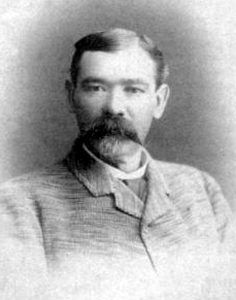 Peter Gabriel – A prominent lawman in Pinal County, Arizona in the 1880s, Gabriel pursued the Red Jack Gang and numerous other bandits. In 1888, he barely survived the Florence, Arizona Gunfight with Joe Phy.

Thomas Gannon – Gannon was elected sheriff of Ellis County, Kansas on December 5, 1867, and quickly made a reputation for himself as a serious lawman, aggressively pursuing outlaws, often with the help of the local soldiers. However, his reign as a lawman would be a short one as early in April 1868, he disappeared. Though what happened to him remains unknown, many of the time believed he had been murdered to prevent his testimony against an outlaw in an upcoming trial.

Raymond Hatfield Gardner, aka: Arizona Bill (1845-1940) – Scout, lawman, Pony Express rider and entertainer, Gardner was born at Logansport, Louisiana on July 5, 1845. Evidently his family moved to Texas when he was just a baby, as he was kidnapped by raiding Comanche Indians at the age of two. Later, the Commanches traded the young boy to the Sioux  Indians, who raised him. When Gardner was 15 he ran away from the Indians and soon became a U.S. Army courier and for a brief period, rode for the Pony Express. When the Civil War broke out, he joined the army and served four terms, and continued as an Indian Scout. While fighting the Apache Indians in Arizona, he was given the nickname of “Arizona Bill.”  In 1892, he was an entertainer in Buffalo Bill Cody’s Wild West Show and would later, serve as a U.S. Deputy Marshal and an Arizona Ranger. With a full life behind him, Gardner became a storyteller, authored a book, and had his own radio show in the 1930s.  After a long illness at the Fort Sam Houston Station Hospital in Texas he died on January 29, 1940. At the time of his death, no records of his military service could be found so he was buried in a pauper’s grave in the city cemetery. However, in 1976, retired Master Sergeant George Miller documented Gardner’s military service and his remains were re-interred at the Fort Sam Houston National Military Cemetery where he rests today.

Henry Garfias – (1851-1896) – During his lifetime, Garfias was arguably one of the most honest lawmen and sharpest gunfighters in the American West, on par with more famous names such as Wyatt and Virgil Earp, and Wild Bill Hickok. 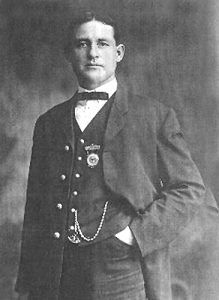 Buck Garrett (1871-1929) – The nephew of Pat Garrett, Buck would grow up to become one of Frank Wolcott’s “Regulators” to fight in the Johnson County War in 1892. He later became a U.S. Deputy Marshal in the Chickasaw Nation and sheriff of Ardmore, Oklahoma, where he led the posse that killed outlaw Bill Dalton.

Sam Gay – (1860-1932) – Sam Gay’s history in the first quarter of the 20th century was the history of Clark County, Nevada, and the city of Las Vegas. Big Sam would be the law for decades.

Augustus M. “Gus” Gildea (18??-1935) –  A lawman, cowboy, and later an outlaw, Gildea was born in Dewitt County, Texas, on April 23, 1854. He was working as a cowboy by 1866 and served as a part-time Texas Ranger in Company D and F, often fighting Indians. Somewhere along the line, he served as a deputy sheriff at Del Rio, Texas, before making his way to New Mexico, where he worked as a cowboy and range guard for John Chisum and joined up with Selman’s Scouts following the turmoil of the Lincoln County War. He was listed by Governor Lew Wallace as wanted for the investigation of at least four murders. Later, he went to Arizona, where he again worked as a cowboy in the San Simon area. He died of natural causes in Douglas, Arizona, on August 10, 1935.

James Buchannan Gillett (1856-1937) – Born in Austin, Texas, on November 4, 1856, he moved with his family to Lampasas around 1872. He worked as a cowhand at several local ranches before he joined the Texas Rangers in 1875. Gillett served in several Texas counties fighting Indians as well as dealing with outlaws. After six years of service as a Texas Ranger, he resigned in the Fall of 1881. He returned to the law when he was appointed as the  Assistant City Marshal in El Paso and, in June 1882, became the Marshal of the city. In April 1885, he resigned from his position and began ranching. In 1921, he wrote a book called Six Years with the Texas Rangers, which would later be utilized as a school textbook. In 1923, he turned his ranch over to his son, moved to Marfa, and retired. However, he remained active and helped to organize the West Texas Historical Association. He died of heart failure on June 11, 1937, and was buried in the Marfa, Texas cemetery.

Jim Gilliland – Appointed a U.S. Deputy Marshal of New Mexico Territory in March 1893, he was suspected of cattle rustling a year later, as well as accused of murdering.

Deputy Sheriff Glasgow – A lawman, Glasgow was serving as a deputy sheriff in  Georgetown, New Mexico, when he killed outlaw Boyd Dempster on December 26, 1881.

Charles Goodnight (1836-1929) – Besides co-founding the Goodnight-Loving Trail, Charles was also a lawman and gunman. He joined the Texas Rangers in 1857 and later served in the Civil War. While driving cattle on the trail, he fought outlaws and Indians for many years in Texas, New Mexico, and California. Goodnight outlived most of his Old West comrades when he died in Tucson, Arizona, on December 12, 1929, at the age of ninety-three.

Harold L. Gosling – Appointed as U.S. Marshal for the Western District of Texas in 1884. He was killed in the line of duty while transporting two stage robbers on a train to prison on February 21, 1885. 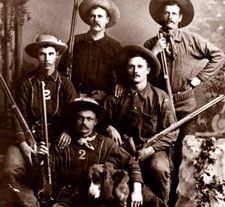 Dayton Graham – A peace officer in Bisbee, Arizona, Graham was selected by Burt Mossman for the newly created Arizona Rangers in 1901. Graham accepted the position and was made a sergeant, earning $75.00 per month. Just a few months after his appointment, Graham and Douglas, Arizona peace officer Tom Vaughn, went after an outlaw named Bill Smith. They found Smith at the general store in Douglas, but when they tried to arrest the outlaw, Smith began to fire his six-shooter. Vaughn was hit in the neck and Graham took shots in the chest, and the arm as Smith escaped. Graham was so badly injured that the Captain of the Arizona Rangers, Burt Mossman, was notified that the sergeant was dying. Mossman immediately gathered Graham’s family and they traveled to Douglas to be with the dying lawman. However, Graham miraculously recovered. After being bed-ridden for two months, Graham determined to go after his assailant and spent the next several months tracking the outlaw. He caught up with Smith in a saloon in southern Arizona. Spying Smith gambling at a monte table, Smith went for his gun, but this time, Graham was faster and left Smith dead on the floor with two bullets in his stomach and one in his head.

Samuel Graham – A Texas Ranger who joined Company A in July 1878 and served until 1880. He later re-enlisted and led the posse that captured Albert Gross.

Ahijah W. (A.W.) Grimes (1850-1878) – Ahijah W. Grimes was born in Bastrop, Texas, on July 5, 1850, to one of the first pioneer families of the area. He began his lawman career as the Bastrop City Marshal in 1874  and joined the Texas Rangers in 1877. In 1878 he moved the family to Round Rock, Texas, where he worked in a bank until he was appointed as a Deputy Sheriff of  Williamson County. Unfortunately for Grimes, when the three members of the Bass Gang, including Sam Bass and Seaborne Barnes, rode into round Rock on July 19, 1878, Grimes spotted them carrying handguns which was illegal within the Round Rock city limits. When he challenged them, they replied by opening fire on him. He is buried in the Old Cemetery in Round Rock, Texas.

Lewis Jack Gylam (18??-1873) – Originally from Texas, Gylam later made his way to Lincoln County, New Mexico, where, in 1872-73, he was the second sheriff of the county, succeeding William Brady. Though influential businessman, Lawrence G. Murphy, had originally backed Gylam for sheriff after the lawman lost the next election, the two became at odds, and Gylam threatened to kill both Lawrence Murphy and his partner, James J. Dolan. When the rowdy Horrell brothers arrived in Lincoln from Texas in 1873, Gylam soon hooked up with lawless characters. On December 1, 1873, Gylam, along with Ben Horrell, rode into Lincoln and began to carouse a number of saloons and brothels. When the drunken men began to shoot off their guns, Constable Juan Martinez soon arrived and demanded that they surrender their weapons, which they did. However, they soon procured more weapons and were shooting up a brothel. When confronted again by Constable Martinez and four other officers, one of Horrell’s friends named, Dave Warner, shot and killed Constable Martinez. Ben Horrell and Jack Gylam then fled, aggressively pursued by the police officers. When the officers caught up with the pair, they pumped their bullets into the two hell-raisers, shooting Horrell nine times and Gylam 13 times. After his death, Lawrence Murphy accused him of malfeasance in office during the time he had served as sheriff.