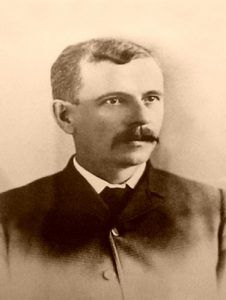 One of New Mexico’s Lincoln County War’s primary instigators, James J. Dolan, was born in Galway County, Ireland, on May 2, 1848. When he was just five years old, his family immigrated to the United States.

When the Civil War broke out, Dolan joined the Union Army in 1862. After the war, he eventually made his way to New Mexico, where he again served at Fort Stanton, New Mexico. Dolan was discharged in April 1869.

While at Fort Stanton, he met another Irishman named Lawrence Murphy, who had also served at Fort Stanton and now owned a sutler’s store called the L. G. Murphy & Co. Store.

Dolan worked as a clerk for Murphy and quickly picked up Murphy’s unethical and illegal business practices.

The store, which had profited from Murphy’s military contacts, was awarded government contracts to supply beef and other supplies to Fort Stanton and the local Mescalero-Apache Reservation Agency. However, much of what they supplied was gained illegally.

In May 1873, the hot-headed James Dolan attempted to shoot and kill a Fort Stanton Captain named James Randlett. Later that summer, in September, L. G. Murphy & Co. was evicted from Fort Stanton, partly due to Dolan’s confrontation with Captain Randlett and accusations of price gouging and scamming the local Mescalero-Apache of the supplies they were supposed to be providing. Amazingly, however, Murphy did not lose his government contracts and quickly made plans to establish a new business in Lincoln, New Mexico.

Dolan went with Murphy to Lincoln, and the pair opened the new business as partners in April 1874. Within no time, “Murphy & Dolan Mercantile and Banking” signed new contracts with Fort Sumner and continued their unethical business practices.

Before long, Murphy & Dolan Mercantile and Banking monopolized the county’s trade, controlling pricing, making immense profits on their goods, and virtually having a hand in nearly every part of the economy of the large county. The merchants and their allies, which included local law enforcement, were familiarly known as “The House.”

For obvious reasons, Murphy and his allies were disliked by the small farmers in Lincoln County as they were forced to pay high costs for their goods while at the same time accepting low prices for their cattle.

In May 1877, Dolan murdered one of his employees, Hilario Jaramillo. He claimed that Jaramilo had threatened him with a knife, and he was eventually acquitted of the crime.

Later that summer, Alexander McSween, a lawyer, and John Tunstall, a wealthy 24-year-old English cattleman and banker, set up a rival business called H.H. Tunstall & Company near the one owned by Dolan and Murphy.  Supporting them was a prominent ranch owner named John Chisum, who owned more than 100,000 head of cattle.

Furious at this development, Dolan attempted to goad Tunstall into a gunfight. However, Tunstall refused to use violence himself but soon recruited Billy the Kid, officially, as a “cattle guard.” However, in February 1878, Tunstall was killed, allegedly on the orders of Murphy and Dolan. The murder started the Lincoln County War, which would take the lives of 19 men, including an unarmed Alexander McSween.

When McSween’s widow hired an attorney named Huston Chapman to investigate the Dolan faction for her husband’s death, Chapman was murdered in February 1879. Dolan was accused of the crime, but with powerful friends, the case against him was dropped.

In the meantime, Dolan purchased the property previously owned by John Tunstall, including his store and ranch.

Amazingly, Dolan would later serve as Lincoln County Treasurer and be elected to the Territorial Senate.

James Dolan died on his ranch on February 6, 1898, probably due to heavy alcoholism. 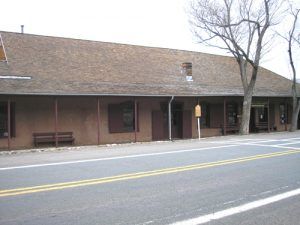 Fort Stanton – Rounding Up the Apache