Dave Kemp –  Kemp was known as both an outlaw and a lawman. While still in his youth, Kemp was sentenced to hang for killing a man in Hamilton, Texas. While awaiting his execution attempted to escape by jumping from the second story of the courthouse. Breaking both ankles, he was quickly recaptured. His sentence was commuted to life, but he received a pardon later. Afterward, he moved to Eddy (now Carlsbad), New Mexico, where he established a butcher shop and became the Eddy County sheriff in 1889. He was also a co-owner of a casino in Phoenix, Arizona, and as sheriff, he tended to cater to the interests of gamblers. But this was the least of his crookedness. When Dee Harkey, a U.S. Deputy Marshal, caught him stealing cattle, he forced Kemp to leave the county. The crooked lawman then went to Arizona but returned when Les Dow, with whom he was a bitter enemy, replaced him as sheriff in Eddy. In April 1896, Kemp shot Dow to death. Quickly arrested, Kemp was acquitted on a plea of self-defense. However, he allegedly had forced the only eyewitness to leave town. Kemp then went back to Texas, where he returned to cattle rustling. He was shot to death by his sister in the 1930s.

Richard M. Kennedy (1848-1921) – Deputy under Sheriff Red Angus during the Johnson County War in Wyoming. Later he became sheriff in 1901.

Louis Kennon – Served as a deputy marshal at Silver City, New Mexico, in the 1880s. 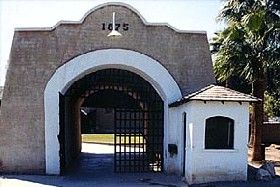 Frank King (1863-1920’s) – A dedicated lawman, King was a deputy sheriff of Phoenix, Arizona, in the 1880s and worked as a lawman in Texas, New Mexico, and California in the next decade. In 1889, he served briefly as a guard at the Yuma, Arizona prison, during which a massive prison break was attempted. Before it was put down, five prisoners lay dead, shot at the hands of King, who was the only guard in the central tower. By 1896, King had returned to being a lawman and was in a gun battle with Will Christian and his gang when they attempted to rob a bank in Nogales, Arizona, on August 6.

Charles Krummeck – Served as a deputy sheriff in Santa Cruz, New Mexico, in the 1880s.