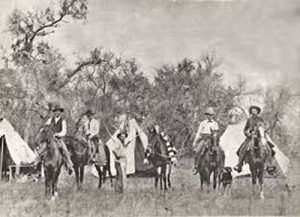 Edgar T. Neal – Served as a Texas Ranger in the 1890s and was later elected sheriff of San Saba County, Texas, for several terms.

Tony Neis – A lawman who, in 1881, was assigned to escort Billy the Kid to trial at Mesilla, New Mexico.

Charles L. Nevill (1855-1906) – Served as a lieutenant and captain in the Texas Rangers, during which he arrested a wounded Sam Bass in 1878, broke up the Jesse Evans Gang, and captured the Potter Gang. He served as Presidio County, Texas sheriff from 1885 to 1888.

Jim Newman – Both a lawman and an outlaw, he consorted with John Wesley Hardin in the 1860s.

J.O.Newton – Served as the Adjutant General of the Texas Rangers in 1907.

Frank P. Nichols – As a Deputy Sheriff in Springer, New Mexico, he shot and killed outlaw John Scott on May 17, 1883.

Evett Dumas “E.D.” Nix (1861-1946) – E.D. Nix took the oath of office as U.S. Marshal for the Oklahoma Territory on July 1, 1893, and served until 1896. He led the posse that fought in the Ingalls, Oklahoma Shoot-out and was primarily responsible for capturing and killing the members of the Doolin-Dalton Gang.

Lon Oden – A Texas Ranger and gunfighter, Oden, along with RangerJohn Hughes, participated in several gunfights along the Mexican border in the late 1800s.

Robert “Bob” Ollinger (1841?-1881) – A crooked U.S. Marshal; Seven Rivers, New Mexico Marshal, and Lincoln County, New Mexico Deputy Sheriff, he was indicted for his participation in the Lincoln County War. He was shot and killed when Billy the Kid escaped jail on April 28, 1881.

John Wallace Olinger – Brother to Bob” Ollinger, he was deputized during the Lincoln County War in New Mexico.

William S. Osborn – Served as a deputy marshal at Prescott, Arizona, during the 1870s.

Commodore Perry Owens (1852-1919) – A lawman and gunfighter of the Old West. One of his many exploits was the Owens-Blevins Shootout in Arizona during the Pleasant Valley War.

Will Owens – Served as a Texas Ranger in 1886 under Captain G.H. Schmidt.