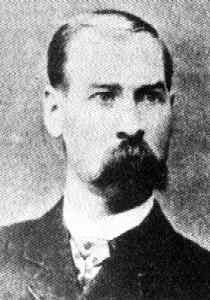 James Cooksey Earp was the lesser-known older brother of Old West lawman Virgil Earp and lawman/gambler ,Wyatt Earp. James was a saloon keeper and was not present at the Gunfight at the O.K. Corral on October 26, 1881.

James was born in Hartford, Kentucky, in 1841 and was reared in a tight-knit family environment. In 1861, at 19, he enlisted in the Union Army at the outbreak of the Civil War, joining Company F, 17th Illinois Infantry in May 1861. His brothers, Virgil and Newton Earp, also enlisted. His service was cut short when he was wounded in the shoulder and lost the use of his left arm in a battle near Fredericktown, Missouri, on October 31, 1861. He was discharged in March 1863. Newton and Virgil served until the end of the war.

After the war, he went with his family to California before traveling to Montana, back to Missouri, and to Kansas. He married a former prostitute named Nellie Ketchum from Illinois in April 1873, and the following year, the pair were living in Wichita, Kansas. In 1876, he headed to Dodge City, Kansas, where he became a deputy sheriff under Charlie Bassett for a brief time. He began roaming through Missouri, Arkansas, and Texas, working in saloons or as a stage and wagon driver.

In 1879, he moved with his brothers to Tombstone, Arizona but was not involved in the Tombstone troubles or the events of the O.K. Corral. When Morgan was killed, he traveled with Virgil and the Earp women to Colton, California, for Morgan’s burial. Afterward, he, with brothers Wyatt and Warren, gambler Doc Holliday and gunmen Sherman McMasters, “Turkey Creek” Jack Johnson, and Texas Jack Vermillion, hunted down those they held responsible for the attacks in Tombstone and Morgan’s death during the Earp Vendetta Ride.

In 1883-84, James was mining in Shoshone County, Idaho, before settling permanently in California in 1890. James Earp died of natural causes on January 25, 1926, and is buried in Mountain View Cemetery, in San Bernardino, California.