Mexico declared itself independent of Spain in 1821 and established a republic. In 1829 the President of Mexico proclaimed the abolition of slavery within the limits of his territory but, Texas refused to comply. The slave power of the United States sent money, supplies, and arms to Texas, and aided in stirring up a revolution with the express purpose of annexing more slave States to the Union. Sam Houston, former Governor of Tennessee, headed the revolution, and in 1836 Texas became a Republic, independent of Mexico.

The next year she applied for admission to the Union, but, opposition in the House and Senate, exposing the duplicity with which the Jackson administration had acted toward Mexico, for the time silenced the agitators for annexation. It was not long, however, until another effort was made to extend the slave territory. A joint resolution annexing Texas received the President’s signature on March 1, 1845. It also pledged the faith of the United States to permit new States to be formed of this territory, not exceeding four. Texas thus became a full-fledged State in the Union, and President James Polk sent troops to occupy the territory between the Nueces and Rio Grande Rivers, which Mexico claimed as her soil. In the war which followed, the territory now comprising the States and Territories of California, Nevada, Utah, Arizona, New Mexico, and a portion of Colorado and Wyoming, was ceded to the United States.

The Compromise Of 1850 (the Omnibus Bill) 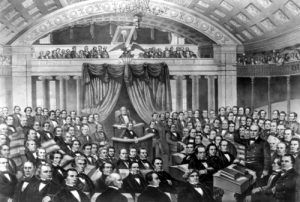 The admission of California as a free State would disturb the equilibrium between the free and slave States, and give to the North the most substantial benefits of the Mexican-American War and defeat the objective for which it had been waged. A great political struggle ensued. Threats of secession were rife. Fiery and impassioned eloquence filled the air, in the midst of which, Henry Clay came forward with his compromise bill.

The bill was stripped of provision after provision, until, when passed, it provided for the territorial government of Utah, and nothing more. The rejected provisions were afterward taken up one by one as a special order of business and passed with but little change from the original bill. The Omnibus Bill was recreated containing the following provisions:

The last clause is called the “Fugitive Slave Law,” the passage of which caused intense opposition in the North. Personal liberty laws were passed by the Northern States, prohibiting state officers from giving aid in the arrest and return of any slave. Counsel was provided for the arrested blacks, and the practical operation of the fugitive slave act annulled.

The passage of the Omnibus Bill was the death-knell of the Whig Party; and instead of pacifying the feelings of the contending elements, it contained in its provisions, the seeds for new and greater conflicts.

In 1854 Stephen A. Douglas introduced a bill that provided for the organization of two Territories, known as Kansas and Nebraska. The people of these Territories were to decide for themselves whether the States should come into the Union free or slave. It virtually repealed the Missouri Compromise, which guaranteed freedom to this section, and a territory nearly as large as the thirteen original States was opened to slavery. Of the two territories, Kansas was the more southerly, therefore the more favorably situated for the planting of the institution of slavery. 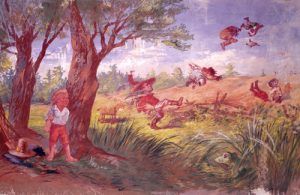 Kansas thus became the battle-ground for the contending elements of freedom and slavery. Great preparations were made both North and South for the settlement of the State. Pro-slavery societies, known as Blue Lodges and Social Bands, were formed from the South. Pro-slavery immigrants poured into the new Territory from Missouri. The Emigrant Aid Society was formed by Eli Thayer, of Worcester, Massachusetts. By means of it and similar societies, a stream of anti-slavery emigrants was sent to Kansas. At the elections, a great many Missourians crossed the border, intimidated election officers, and cast thousands of illegal votes for the pro-slavery candidates, who thus received a large majority of all votes cast. The anti-slavery settlers, who had cast a majority of legal votes, repudiated the election and chose their own officers.

With two rival Legislatures, and with the opposing parties of freedom and slavery bitterly contending for supremacy, matters soon drifted into Civil War in the new Territory. The burning of houses, sacking of towns, and the taking of life continued for several years. This bloody drama awakened the conscience of many persons to the real intent and purposes of the slave-power. Although the pro-slavery party had the moral and material support of the President and cabinet, Kansas was finally won to the cause of freedom and was admitted to the Union in 1861. 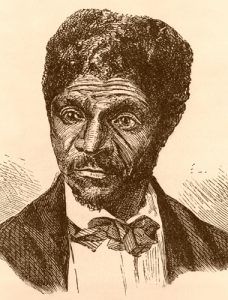 Dred Scott was a slave, who was taken by his master, Dr. Emerson, from the State of Missouri to the free State of Illinois; then to Fort Snelling, near the present site of St. Paul, Minnesota. There, he married with his master’s consent and was taken back to Missouri in 1838, where, with his wife and children, he was sold to John P.A. Sanford. Dred Scott sued for the liberty of himself and family; alleging that his residence in a free State and in a Territory from which slavery was excluded by the Missouri Compromise, established his freedom. An action for trespass, brought in a St. Louis, Missouri court, was decided in Scott’s favor, which was reversed by the Missouri Supreme Court. The case was then taken to the Federal court.  The case ceased to be of a personal interest only and assumed national importance as a contest for constitutional principles between the slavery and anti-slavery parties. Both the Circuit and the Supreme Court of the United States decided against the freedom of Scott. In the final decision, the court affirmed that “no negro, slave or free, who was of slave ancestry, was entitled to sue in the courts of the United States.”

After denying its own jurisdiction of the case, the court passed upon the merits and proceeded to discuss the constitutionality of the points which were of interest to the opposing parties. It declared the Missouri Compromise was unconstitutional; that slave-owners could carry their slaves into any of the Territories, and that the people of those Territories could not lawfully hinder them; that a black person was not a citizen, and by terms of the U.S. Constitution could not become a citizen of the United States. A mandate was issued directing the suit to be dismissed for want of jurisdiction. Dred Scott soon obtained, by the grace of his master, that freedom which the courts denied him.

By this decision of the Supreme Court, which is considered the most infamous of all its decisions, slaves could be taken anywhere, and slavery made national. Instead; however, of extending the institution, as was the intention of the judges (a majority of whom were from slave States), it united the people of the North in more determined opposition to the extension of slavery. 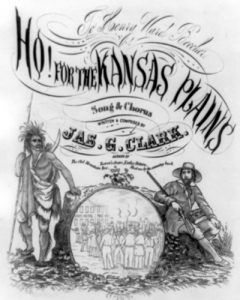 The opinions on the slavery question separated the people of the North and South. The effort on the part of the South to extend the institution was the source of the bitterest friction between the two sections. A majority of the people of the North, at the time of the Missouri Compromise, had not thought of abolishing slavery in the Southern States; in fact, this was not their intention at the beginning of the Civil War. There were some inspired souls in the North; however, who at an early date devoted their talents to the abolition of slavery. Some of the most prominent deserve mention. The press and the platform were used with great effect to arouse the public conscience to a realization of the great national wrong.

The Liberator, a weekly journal published by William Lloyd Garrison, then a youth of 26, appeared in Boston in 1831. The spirit of the paper was indicated by his words in the first issue: “I will be as harsh as truth, and as uncompromising as justice. On this subject, I do not wish to speak or think or write with moderation. No! No! I am in earnest — I will not equivocate — I will not excuse — I will not retreat a single inch — and I will be heard! ”

He was dragged through the streets of Boston with a rope around his body; he was threatened with death if he did not desist; but, he still continued to publish his paper and to organize abolition societies, until the great wrong he assailed was eradicated.

Reverend Elijah P. Lovejoy attempted to establish a religious and anti-slavery paper, first at St. Louis, Missouri, and then at Alton, Illinois, 1835-37. Three times in one year a pro-slavery mob destroyed his press. While engaged in setting it up a fourth time, a pro-slavery mob attacked him and he was killed.

John G. Whittier, the Quaker anti-slavery poet, whose burning lyrics flew across the country and molded sentiment against slavery, narrowly escaped death at the hands of a mob at Concord, New Hampshire in 1836, while attending an anti-slavery meeting.

Of the literary forces that aided in directing sentiment against slavery, the weightiest was the book Uncle Tom’s Cabin, written by Mrs. Harriet Beecher Stowe. It first appeared as a serial in the National Era, an anti-slavery newspaper at Washington, D.C, but attracted little attention. The great book houses were afraid to publish it lest it should hurt their Southern trade. A new house in Boston published it, in 1852. It at once attracted great attention and became one of the most popular novels ever written. Whittier wrote to Garrison: “What a glorious work Harriet Beecher Stowe has wrought! Thanks to the Fugitive Slave Law. Better for slavery that that law had never been enacted, for it gave the occasion for Uncle Tom’s Cabin“ The sale of the book was almost without limit, at home and abroad. Its greatest success, however, was its moral weight in unifying and antagonizing the Northern conscience to the iniquities of the slave-power.

The Impending Crisis of the South was an argument against slavery on moral and economic grounds. Its author, Hinton Bowan Helper, was one of the non-slaveholders of the South, who pleaded for the rights of his class. The book at the time created quite a strong sensation.

The constant discussion and agitation aroused fears and animosities. The mails were regularly searched in many Southern post offices, and any anti-slavery literature was taken out and burned. “Abolitionist” became the severest term of reproach in the South. The churches became violently agitated over the burning issue. Methodist, Baptist and Presbyterian denominations separated, North and South, on the subject of slavery.

From the influence of platform, pulpit, society, and press, arrayed against the encroaching steps of slavery upon the territory formally dedicated to freedom, there came a crystallized sentiment expressed in the principles of the Republican Party in its platform of 1856.