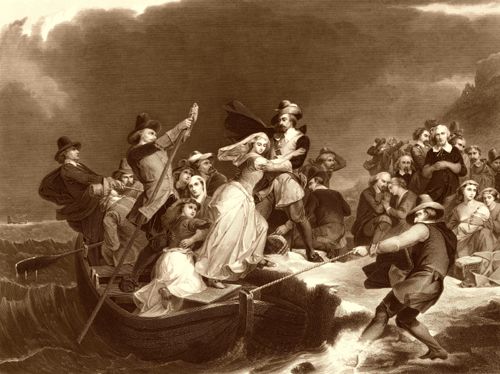 Landing of the Pilgrims on Plymouth, by Peter Frederick Rock Rothermel, 1869

In the early 17th century, thousands of English Puritans settled in North America, mainly in New England. Many believed the Church of England had been insufficiently reformed, retaining too much of its Roman Catholic doctrine, and wished to separate from the church. Called “separatists,” these Pilgrims established the Plymouth Colony in 1620.

Another group of Puritans, with a charter from the Massachusetts Bay Company, left England searching for a place to practice their religion freely in 1630. Like the Pilgrims, these Puritans were English Protestants who believed that the Church of England’s reforms did not go far enough. However, this group did not break with the Church of England but instead sought to reform it. 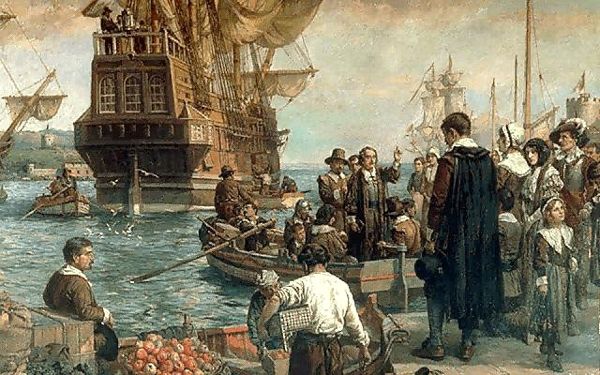 They founded the Massachusetts Bay Colony (in present-day Boston) to establish a new, pure Christian commonwealth north of the Plymouth Colony. More colonies would be established in Connecticut – the Saybrook Colony in 1635, the Connecticut Colony in 1636, and the New Haven Colony in 1638. The Colony of Rhode Island and Providence Plantations was established by settlers expelled from the Massachusetts Bay Colony because of their unorthodox religious opinions in 1836. Puritans were also active in New Hampshire before it became a crown colony in 1691.

Most Puritans who migrated to North America came in 1630-1640 in what is known as the Great Migration. Primarily an exodus of families, over 13,000 men, women, and children sailed to Massachusetts.

Life was hard for the colonists in the New World, but they were free to worship as they chose. Their colonies were based on the Bible’s laws, and they believed that God would protect them if they obeyed religious laws. If they did not honor their obligations, they would be punished. Their church services were simple, and though they sang, all musical instruments were forbidden.

They also believed that God had chosen only a few people, “the elect,” for salvation, and the rest of humanity was condemned to eternal damnation. Because no one knew if they were saved or damned, they lived in a constant state of spiritual anxiety, searching for signs of God’s favor or anger.

Though the Puritans enjoyed the freedom of worship, the Puritan fathers had no tolerance for opposing religious or political views. It was not only individual salvation that mattered but also the welfare of the community. As a result, communities demanded religious conformity, and dissent was tolerated only within strict limits. The most famous dissidents within the Puritan community of Massachusetts Bay were Roger Williams and Anne Hutchinson, who were banished following disagreements over theology and policy.

Only Puritan men who were church members and owned land could vote for governor and representatives to the General Court. Women were not allowed to participate in government. The General Court made strict laws for the colony that governed crime, regulated business, and social relations, religious affairs and family relations, and even dictated dress.

Some of these laws included:

Sunday was a holy day. Therefore, trade and business were not allowed, and no other public meetings could be held other than church services. Church meetings on Sunday included two-hour services in the morning and the afternoon. Travel on Sunday was banned, except for walking to and from the meeting house and for emergencies. Any entertainment was banned on Sunday. If a person missed church, they had to go to court and pay a fine.

The Puritans thought it was essential to be able to read and understand the Bible. Schools were created to help educate the children of the colony. The “Old Deluder Law” stated that every town of 50 or more families had to pay for a teacher and that all children should attend school.

Laws were passed about what kinds of clothing the people could wear. The laws allowed only certain wealthier people to wear silver, gold, silk, laces, and other finery. Long hair for men was illegal.

It was illegal for men to smoke in the street or for a youth to court a maid without her parents’ consent. 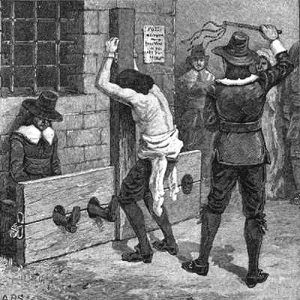 Kissing in public was illegal. On one occasion, Captain Kimble, who had just returned from a three-year ocean voyage, kissed his wife on his doorstep and spent two hours in the stocks for his “lewd and unseemly behavior.”

There were laws to punish people for using bad words, drinking too much alcohol, being lazy, gluttony, fighting, poorly made products, having a bad attitude, and gossiping. No Christmas celebrations were allowed, and marriages were performed by colony officials, not ministers.

Any signs of resistance to the government were punishable by public humiliation to banishment.

They also controlled individual behavior through fierce gossip, defamatory and often obscene billboards, and lawsuits. In one town, 20 percent of the adults in each decade were charged with an offense, usually a morals violation.

Punishments for violating Puritan laws included fines, imprisonment, pillory, stocks, whipping, ducking stool, public humiliation, hanging, tar and feathering, ears being cut off, burning, and even a hot awl through the tongue if an individual spoke against their religion.

Believing in the Old Testament methods, Puritans felt no remorse about administering punishment. 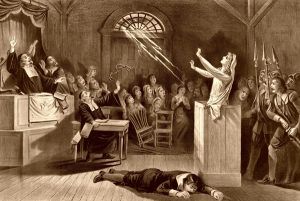 Puritan fears, beliefs, and institutions were the perfect storm that fueled the witch craze in Connecticut, which began in 1647 and again in Salem, Massachusetts, in 1692. When colonists’ anxieties were high, they often looked for something or someone to blame, and in these cases, witchcraft became the scapegoat.

By the 1660s, the Puritan settlements were confronted with the challenge posed by an aging first generation of those who had created the original colonies. At the same time, New England had begun to trade more, creating new jobs. The numbers in the colonies began to decline, especially among men. In 1679, Puritan leaders met to deliberate the causes of widespread spiritual disinterest. Blame was assigned to an increase in moral violations and made their laws even stricter, driving more colonists away.

Eventually, the Puritans relaxed their church membership standards, their religious fervor diminished, and their churches became open centers of worship. Later, they evolved into Congregationalist churches. 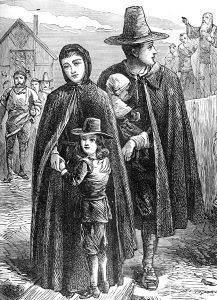