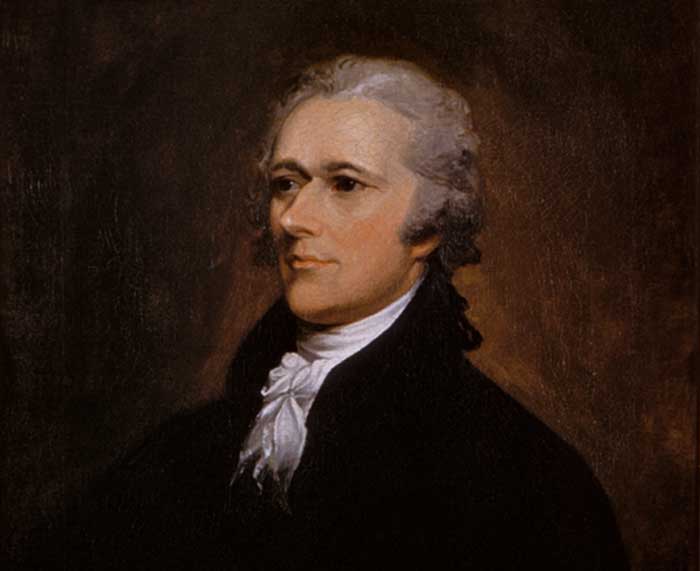 Alexander Hamilton was born January 11, 1755 (other historical evidence shows 1757) on the island of Nevis, in the Leeward group of the British West Indies. He was the illegitimate son of a common-law marriage between a poor itinerant Scottish merchant of aristocratic descent and an English-French Huguenot mother who was a planter’s daughter. In 1766, after the father had moved his family elsewhere in the Leewards to St. Croix in the Danish (now the United States) Virgin Islands, he returned to St. Kitts while his wife and two sons remained on St. Croix.

His mother, who opened a small store to make ends meet, and a Presbyterian clergyman provided Hamilton with basic education, and he learned to speak fluent French. About the time of his mother’s death in 1768, he became an apprentice clerk in a mercantile establishment at Christiansted, St. Croix, whose proprietor became one of his benefactors. Recognizing his ambition and superior intelligence, they raised a fund for his education.

In 1772, bearing letters of introduction, Hamilton traveled to New York City. Patrons he met there arranged for him to attend Barber’s Academy at Elizabethtown (present Elizabeth), New Jersey. During this time, he met and stayed for a while at the home of William Livingston, who would one day be a fellow signer of the Constitution. Late the following year, 1773, Hamilton entered King’s College (later Columbia College and University) in New York City, but the American Revolution interrupted his studies.

George Washington in the American Revolution by Junius B. Stearns, 1854.

Although not yet 20 years of age, in 1774-75 Hamilton wrote several widely read pro-Whig pamphlets. Right after the war broke out, he accepted an artillery captaincy and fought in the principal campaigns of 1776-77. In the latter year, winning the rank of lieutenant colonel, he joined the staff of General George Washington as secretary and aide-de-camp and soon became his close confidant.

In 1780 Hamilton wed New Yorker Elizabeth Schuyler, whose family was wealthy and politically powerful; they were to have eight children. In 1781, after some disagreements with Washington, he took a command position under Lafayette in the Yorktown, Virginia, campaign (1781). He resigned his commission that November.

Hamilton then read law at Albany and quickly entered practice, but public service soon attracted him. He was elected to the Continental Congress in 1782-83. In the latter year, he established a law office in New York City. Because of his interest in strengthening the central government, he represented his state at the Annapolis Convention in 1786, where he urged the calling of the Constitutional Convention. 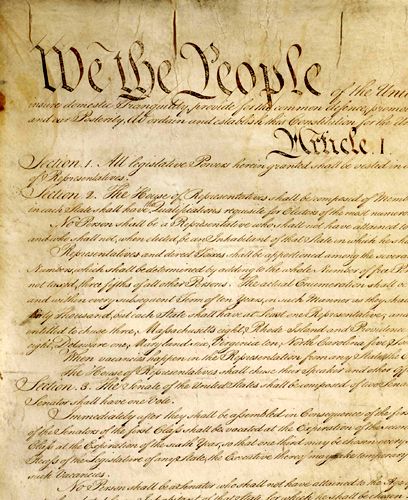 In 1787 Hamilton served in the legislature, which appointed him as a delegate to the convention. He played a surprisingly small part in the debates because he was frequently absent on legal business. His extreme nationalism put him at odds with most of the delegates, and he was frustrated by the conservative views of his two fellow delegates from New York. He did, however, sit on the Committee of Style, and he was the only one of the three delegates from his state who signed the finished document. Hamilton’s part in New York’s ratification the following year was substantial, though he felt the Constitution was deficient in many respects. Against determined opposition, he waged a strenuous and successful campaign, including collaboration with John Jay and James Madison in writing The Federalist. In 1787 Hamilton was again elected to the Continental Congress.

When the new government got underway in 1789, Hamilton won the Secretary of the Treasury position. He began to place the nation’s disorganized finances on a sound footing. In a series of reports (1790-91), he presented a program to stabilize national finances and shape the country’s future as a powerful, industrial nation. He proposed the establishment of a national bank, funding of the national debt, assumption of state war debts, and the encouragement of manufacturing, laying the foundation of the current national financial system in the U.S.

Hamilton’s policies soon conflicted with Thomas Jefferson and James Madison. Their disputes with him over his pro-business economic program, sympathies for Great Britain, disdain for the common man, and opposition to the principles and excesses of the French Revolution contributed to the formation of the first U.S. party system. It pitted Hamilton and the Federalists against Jefferson and Madison and the Democratic-Republicans. 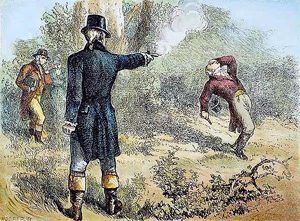 While gaining stature in the law, Hamilton profoundly impacted New York and national politics. Always an opponent of fellow Federalist John Adams, he sought to prevent his election to the presidency in 1796. When that failed, he continued to use his influence secretly within Adams’ cabinet. The bitterness between the two men became public knowledge in 1800 when Hamilton denounced Adams in a letter published through the efforts of the Democratic-Republicans.

In 1802 Hamilton and his family moved into The Grange, a country home he had built in a rural part of Manhattan not far north of New York City. But the expenses and investments in northern land speculations seriously strained his finances.

Meanwhile, when Thomas Jefferson and Aaron Burr tied in Presidential electoral votes in 1800, Hamilton threw valuable support to Thomas Jefferson. In 1804, when Burr sought the governorship of New York, Hamilton again managed to defeat him. That same year, Burr, taking offense at remarks he believed to have originated with Hamilton, challenged him to a duel, which took place at present Weehawken, New Jersey, on July 11. Mortally wounded, Hamilton died the next day. He was in his late forties at death. He was buried in Trinity Churchyard in New York City.

Coloring History by Legends of America