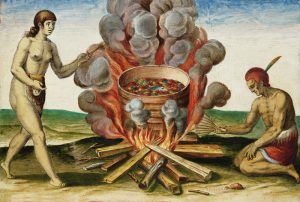 The Saponi or Sappony are an eastern Siouan tribe, who have long lived in North Carolina and Virginia. Their language appears to have been the same as the Tutelo to the extent that the people of the two tribes could readily understand each other. They were engaged in war with the Virginia settlers as early as 1654-56, the time of the attack by the Cherokee, probably in alliance with them. They were first mentioned by explorer, John Lederer in 1670 who placed them on a tributary of the upper Roanoke River. At that time, they were living with the Tutelo, but later when they were harassed by the Iroquois Indians, they moved to the junction of Staunton and Dan Rivers, where they settled in what is now Mecklenburg County, Virginia.

Many of them fought in the Tuscarora War against the British, Dutch, and German settlers from 1711 to 1715. By 1740, most of the tribe had traveled northward to Pennsylvania where they surrendered to the Iroquois and later joined them in New York. In 1753, the Cayuga tribe formally adopted the Saponi and Tutelo.

Most of the Iroquois sided with the British in the American Revolution and after the victory by the United States, the Saponi and Tutelo who had joined the Iroquois, fled to Canada. It appears, however, from a treaty made with the Cayuga at Albany, New York in 1780, that a remnant was still living with this tribe on the Seneca River. However, of those Saponi who did not travel with the rest when they went north, they continued to live in the central Piedmont area straddling the North Carolina-Virginia border.

The Saponi were known for the unusual occurrence of blue and grey eye color in many of their people. Local legend has it that they might be a mixed remnant of the Lost Colony of Roanoke, but the Saponi do not comment on this legend.