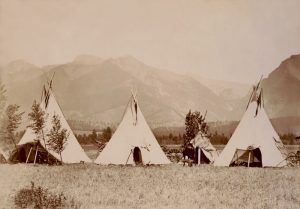 The Salish Tribe also referred to as the Flathead, were a large and powerful division of the Salishan family, to which they gave their name. They inhabited much of western Montana centered around the Flathead Lake and valley. They were called the Flathead Indians by Lewis and Clark when they came upon them in 1806. Though the name is often said to derive from the flat skull produced by binding infant’s skulls with boards, this is a myth. The tribe never practiced head flattening, but instead, were called “flat head” because the tops of their heads were not pointed like those of neighboring tribes who practiced vertical head-binding. The Flathead called themselves Séliš (pronounced SEH-lish) which was anglicized as Salish, meaning “the people.”

In the spring and summer, they gathered roots, vegetables, and berries, and caught many types of fish, some of which they dried for use throughout the year. In the fall, the men hunted mostly deer and elk, and the women dried meats and prepared hides for clothing. They also hunted buffalo, but this was less frequent as they were cut off from the buffalo country by their powerful enemies, the Blackfoot. They colored their clothing with natural dyes and decorated them with porcupine quills. They fashioned tools from stone, bones, and wood. They lived in houses made of bark and reeds, as well as in the skin tipis. 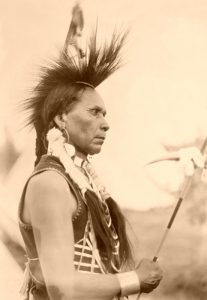 The fur trade began in earnest in the area in the early 1800s, after the Lewis and Clark expedition. Trappers eliminated countless animals, profoundly changing the tribe’s way of life. Between 1815 and 1820, the Iroquois came to the territory bringing word of the powerful “black robes,” the Jesuit missionaries who had ministered to them since the 1600s. Earlier, a Salish prophet, Shining Shirt, had a vision of men in long black robes coming to the Salish people to offer different medicines and prayers. The Salish saw the Iroquois stories as a sign and invited the Jesuits to Western Montana. Unbeknownst to them, the Jesuits were on a mission to assimilate the tribe through religious conversion. In the next years, the Salish would be forced to abandon much of their culture and spiritual practices. However, Jesuit missionary Pierre Jean De Smet, who in 1841 founded the mission of St. Mary in the Bitterroot valley among the Salish, did persuade the Blackfoot to make peace.

The Salish, along with the Pend d’Oreille and the Kootenai tribes, by the Treaty of Hell Gate on July 16, 1855, ceded to the United States their lands in Montana and Idaho. However, most Salish Indians avoided moving to the reservation until about 1872.

Today, they form part of the Confederated Salish and Kootenai tribes who live on the 1.3 million-acre Flathead Reservation in northwest Montana.