There are hundreds of women who stand out in American History, and many events in our nation’s growth that led to the ultimate equality. Here’s a timeline of some significant events. 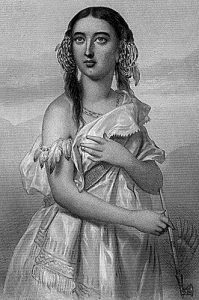 1620 – On November 21, when the Mayflower arrived, 13-year-old Mary Chilton was the first European to set foot at Plymouth, Massachusetts.

1638 – Anne Hutchinson, who challenged the teachings of the leaders of the Massachusetts Bay Colony, is tried for heresy and banished. She and her family moved to Rhode Island.

1648 – Margaret Brent, one of the largest landowners in Maryland, asks the Maryland Assembly for two votes, one for herself and another as Leonard Calvert’s administrator and Lord Baltimore’s attorney. Her request is denied.

1650 – Anne Bradstreet’s first volume of poems, The Tenth Muse Lately Sprung Up in America, is published in London.

1660 – Mary Barrett Dyer is executed in Boston for her Quaker proselytizing.

1682 – Mary Rowlandson publishes A Narrative of the Captivity and Restoration of Mrs. Mary Rowlandson, describing her capture by Narragansett warriors and three months of captivity. 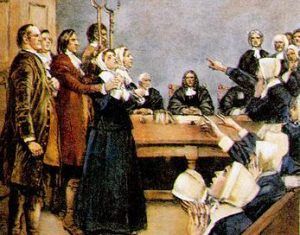 1692 – In an outbreak of hysteria in and around Salem, Massachusetts, hundreds of people, mostly women, are accused of witchcraft. Nineteen are put to death. Most of the accused and the accusers are women.

1707 – Henrietta Johnston begins to work as a portrait artist in Charleston, South Carolina, making her the first known professional woman artist in America.

1766 – Mary Katherine Goddard and her widowed mother become publishers of the Providence Gazette newspaper and the annual West’s Almanack, making her the first woman publisher in America.

1767 – Anne Catherine Hoof Green takes over her late husband’s printing and newspaper business, becoming the first American woman to run a print shop. The following year she is named the official printer for the colony of Maryland.

1769 – American colonies based their laws on the English common law, which was summarized in the Blackstone Commentaries. It said, “By marriage, the husband and wife are one person in the law? The very being and legal existence of the woman is suspended during the marriage, or at least is incorporated into that of her husband under whose wing and protection she performs everything.”

1770 – Phillis Wheatley, the first African American woman poet of note in the United States, publishes her first poem, An Elegiac Poem, on the Death of the Celebrated Divine…George Whitefield. 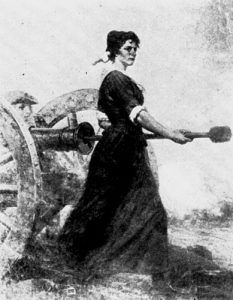 1773 – As an adjunct to the Sons of Liberty, women form the Daughters of Liberty.

1775 – Mary Katherine Goddard becomes the first woman postmaster in the country (in Baltimore), and in 1777 she became the first printer to offer copies of the Declaration of Independence that included the signers’ names.

1776 – Ann Lee founds the parent Shaker settlement in America in the woods of Niskeyuna, New York.

1777 – All states pass laws which take away women’s right to vote.

1778 – On June 28, Mary McCauly (“Molly Pitcher”), wife of an American gunner, brings water to the troops at the Battle of Monmouth Court House. Legend claims that she takes her husband’s place after he collapses.

1782 – Deborah Sampson Gannett, disguised as a man, enlists in the 4th Massachusetts Regiment as Robert Shurtleff. She is one of many women who fight in the American Revolution.

1789 – The United States Constitution ratified. The terms “persons,” “people” and “electors” are used, allowing the interpretation of those beings to include men and women.

Mary Katherine Goddard opened a Baltimore bookstore, probably the first woman in America to do so. 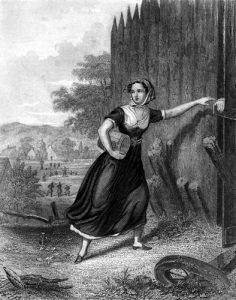 Woman delivering supplies to a fort during the American Revolution

1790 – Judith Sargent Murray publishes her essay “On the Equality of the Sexes.

Mother Bernardina Matthews establishes a Carmelite convent near Port Tobacco, Maryland, the first community of Roman Catholic nuns in the Thirteen Colonies. (The Ursuline convent established in New Orleans in 1727 was still in French territory.)

1792 – Suzanne Vaillande appears in The Bird Catcher, in New York, the first ballet presented in the U.S. She was also probably the first woman to work as a choreographer and set designer in the United States.

1793 – Hannah Slater receives the first U.S. patent granted to a woman, for a type of cotton thread. Her invention helps her husband build a successful textile business.

1795 – Anne Parrish founds the House of Industry, which provides employment to poor women. It is the first American charitable organization operated by women for women.

1800 – The United States logs the highest birth rate in the world, 7.04 children per woman. 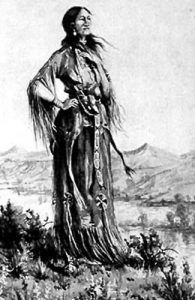 1804 – Native American Sacagawea, whose husband is a member of the Lewis and Clark Expedition, serves as a guide and interpreter for the group.

1805 – Mercy Otis Warren publishes her influential History of the Rise, Progress, and Termination of the American Revolution, drawing in part on personal knowledge of the prominent figures of the time.

1807 – New Jersey revokes the right of women to vote, a right they had been granted since the adoption of the constitution of New Jersey in 1776.

1809 – Elizabeth Ann Seton establishes the first American community of the Sisters of Charity, in Emmitsburg, Maryland. In 1975 she became the first native-born American to be made a saint by the Roman Catholic Church.

1825 – Frances Wright founds a utopian community at Nashoba, Tennessee, trying to put into practice her ideas for the gradual emancipation of slaves. The plantation fails but attracts wide publicity.

1833 – Lydia Maria Child publishes An Appeal in Favor of That Class of Americans Called Africans, arguing for the abolition of slavery.

Oberlin Collegiate Institute (later Oberlin College) is founded in Ohio as the first American college to admit men and women on an equal basis.