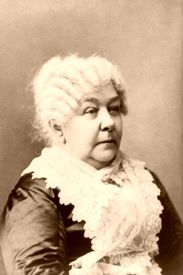 “We hold these truths to be self-evident: that all men   and women are created equal…”

Though somewhat overshadowed by her long-time friend and colleague, Susan B. Anthony, Elizabeth Cady Stanton was another leading figure of the early woman’s movement. Born in Johnstown, New York, to Daniel Cady and Margaret Livingston Cady on November 12, 1815, Elizabeth was the eighth of eleven children, though only five would live to adulthood.

She received a formal education at Johnstown Academy until the age of 16 and then attended the Troy Female Seminary in Troy, New York. When she married abolitionist Henry Brewster in 1840, she insisted that the word obey be dropped from the ceremony.

Though the couple did not entirely agree on women’s suffrage and often lived apart due to travel and financial considerations, they still had seven children.

Elizabeth became an active abolitionist herself and her outrage at being excluded from an anti-slavery convention because of her gender inspired her to co-organize the 1848 Women’s Rights Convention in Seneca Falls, New York, where her presentation speech garnered her credit for initiating the first organized woman’s rights and woman’s suffrage movements in the United States.

She and her friend, Susan B. Anthony, formed the National Woman Suffrage Association in 1869 and actively worked together to secure women’s right to vote; however, neither would live to see the day.

Throughout her life, she made numerous presentations and speeches and authored numerous articles and books. Stanton died of heart failure at her home in New York City on October 26, 1902, nearly 20 years before women were granted the right to vote in the United States.

Woman Suffrage in the United States