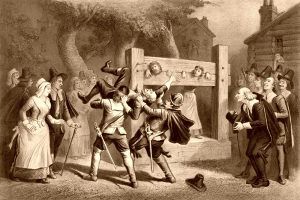 The Magistrates, Ministers, Jewries, and all the People in general, being so much enraged and incensed against us by the Delusion of the Devil, which we can term no other, by reason we know in our own Consciences, we are all Innocent Persons.

Witch hunts occurred across the world, particularly in the 15th–18th centuries. Though it is impossible to know how many people were executed for witchcraft in Europe and the American colonies, it has been estimated to have been from 40,000-50,000.

Until about 1420, witchcraft-related prosecutions in Europe centered around the concept of using supernatural powers specifically to harm others. It was not until the early 15th century, that witchcraft began to be associated with Satan. It was at this time that organized witch-hunts increased, as well as individual accusations of sorcery. At the same time, a number of papers were published that helped to establish a stereotype of the witch and their Satanic connection.

In the 17th Century, witch hunts began to take place in the American colonies, particularly in Massachusetts and Connecticut. About 80 people were accused of practicing witchcraft in a witch-hunt that lasted throughout New England from 1648-1663. Thirteen women and two men were executed. Some twenty years later, the Salem witch trials occurred in 1692–93, culminating in about 72 trials and 20 executions. Trials occurred between February 1692 and May 1693, and though generally known as the Salem witch trials, the preliminary hearings in 1692 were conducted in a variety of towns across the province including Salem Village, Ipswich, Andover, and Salem Towne, where the most infamous trials were conducted by the Court of Oyer and Terminer.

A Boston merchant named Robert Calef, who denounced the Salem witch trials of 1692, would write:

“And now Nineteen persons having been hang’d, and one prest to death, and Eight more condemned, in all Twenty and Eight, of which above a third part were Members of some of the Churches of New England, and more than half of them of a good Conversation in general, and not one clear’d; about Fifty having confest themselves to be Witches, of which not one Executed; above an Hundred and Fifty in Prison, and Two Hundred more accused; the Special Commission of Oyer and Terminer comes to a period…”

The Witch Hunt went on far too long. Only when Governor William Phips’ wife was accused did he finally take a stand against any further imprisonments and forbade any more executions for witchcraft in Salem. Because of the governor’s actions, the nearly 150 men and women who were still chained to prison walls were set free and many who had been convicted of witchcraft were pardoned.

In 1711, the Massachusetts Legislature passed a general amnesty that exonerated all but six of the accused witches. Centuries later, in 1957, the Massachusetts state legislature passed a resolution exonerating Ann Greenslit Pudeator, who had been hanged. Finally, on November 1, 2001, acting Massachusetts Governor Jane Swift approved a bill that cleared all the accused witches hanged in Salem in 1692 and exonerated the final five who had not been cleared by the previous amnesty resolutions — Susannah North Martin, Bridget Playfer Bishop, Alice Parker, Margaret Stevenson Scott, and Wilmot Redd.

Refused to Plea and Executed:

(As many as 13 others may have also died in prison.)

Accused and Fled Before Being Arrested:

Accused, Not Indicted, and Released:

Tried, Found Not Guilty, and Released: 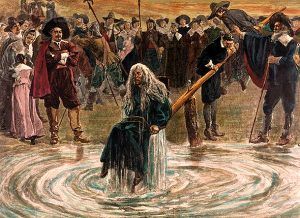 Dunking was often used to determine if someone was a witch. If the accused sank he or she was considered innocent while floating indicated witchcraft.