Anthony was born near Adams, Massachusetts, on February 15, 1820, to a liberal Quaker abolitionist family. She received a good education and learned to read and write at the age of three. The family moved from Massachusetts to Battensville, New York, in 1826, where she continued her education and, by the time she was 16, had become a teacher herself. In 1839 she took a position in a Quaker seminary in New Rochelle, New York. Then, from 1846 to 1849, she taught at a female academy in upstate New York. Afterward, she left teaching and moved to the family farm in Rochester, New York.

There she met many leading abolitionists, including Frederick Douglass, Parker Pillsbury, and Wendell Phillips, and became involved in the anti-slavery movement. Soon the temperance movement enlisted her sympathy, and then, after meeting Amelia Bloomer and, through her, Elizabeth Cady Stanton, so did that of woman suffrage. During the Civil War, she focused on abolition and was the principal New York agent for the American Anti-Slavery Society. 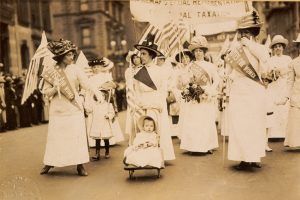 Suffragists Marching in New York City in 1912, by the American Press Association.

After the war, however, she returned to her women’s suffrage movement activities. For 45 years, she traveled throughout the United States by stagecoach, wagon, carriage, and train, making 75-100 speeches a year. Unfortunately, though she was key to the passage of the Nineteenth Amendment, which gave women the right to vote, she would not live to see it implemented. She died 14 years before it was passed.

On March 13, 1906, Anthony died of pneumonia and heart failure. She was buried at the Mount Hope Cemetery in Rochester, New York.