John and Charles Ruggles came from a respected family in Tulare County, California. Handsome men, Charles attended college but John was seemingly a “problem” from a young age. The boys’ father had high hopes for Charles but little faith in John as he was already in trouble with the law, arrested and imprisoned for robbery, while still a very young man. However, about the time Charles graduated from college, John was released from prison and began to corrupt his younger brother, who had never committed a crime.

He soon talked Charles into making his living the “easy way” by robbing a stagecoach. On May 14, 1892, the pair lay in wait for the Redding & Weaverville Stage just outside of Redding, California, intent upon taking a strongbox filled with some $5,000 in gold coins.

The stage, driven by John Boyce, headed east in the late afternoon on what is now Middle Creek Road, from Shasta to Redding. Its only passenger was George Suhr, who was riding up front with the driver. However, the stage guard, who also acted as the stage messenger, Amos “Buck” Montgomery, was riding inside the coach. When the stage came to a sharp curve in the road it slowed and out of the trees stepped Charles Ruggles. Wearing a long coat and a bandanna covering his face, he was pointing a shotgun at the driver. When he ordered Boyce to stop the stage and throw down the strongbox, Boyce immediately complied, heaving the heavy box to the ground.

Almost simultaneously, a blast sounded from inside the coach as Montgomery fired his shotgun, riddling Charles in the face and upper body with buckshot. As the bandit fell, he returned the fire, hitting both Boyce and Suhr in the legs.

Suddenly, John, who was hidden nearby, retaliated by firing shots into the stagecoach. He hit Montgomery who would die just hours later from his wounds. Frightened by the blasts, the horses took off running, pulling the stage behind them.

John, believing that his brother was dying, grabbed the heavy strongbox, hid it nearby, and fled. As soon as the stage reached “civilization” to tell their tale, a posse was formed who quickly found Charles. Though severely wounded, they took him to the Redding jail where his injuries were treated.

John made a clean getaway for a short time, winding up at his aunt’s house in Woodland. However, when she learned that he had robbed a stage and killed a man she kicked him out and reported him to the local sheriff. Six weeks after the robbery, on June 19th, John was arrested while sitting in a restaurant in Woodland. Returned to the Redding jail, John was surprised to find his brother very much alive and recovering from his wounds.

In an effort to save himself and his brother, John told the authorities that the stage guard, Montgomery, was in cahoots with them. He also revealed where he had hidden the gold, telling authorities that he had hidden it in Middle Creek. Attached to the strongbox was a floating device that came within a foot of the top of the water that would help him in finding it later. 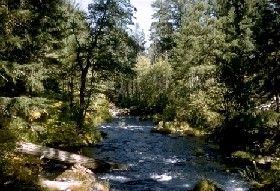 Both John and Charles being handsome and charming, drew the attention of the local ladies who began pamper them. Some brought cakes and fruits, others gave them flower bouquets, and allegedly, the pair even received offers of marriage.

This, of course, enraged the local men who were already upset over the killing of Montgomery. On the evening of July 24, 1892, a vigilante mob of some 40 men stormed the jail. The lone jailer, George Albro, could do nothing as the men blew open the safe that held the jail keys.

As the lynch mob forcibly took the pair from the jail, John Ruggles offered to divulge the location of the stolen loot if the mob would free his brother. “Spare Charley and I will tell you,” John Ruggles was quoted as saying.

But the lynch mob wouldn’t hear of it, dragging the men to a tree next to the Redding Blacksmith shop at the northwest corner of Shasta Street and the railroad tracks. John was 33 years old, Charles, just 22.

The next morning, Redding residents found the two bandits hanging by their necks. The bodies stayed there for three days as passengers on nearby trains viewed their gruesome remains.

In a local newspaper editorial, it said that justice had been fairly meted out and further: 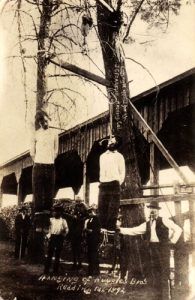 It was a disagreeable job, but under the circumstances appeared to be necessary for the public good and is an example to the courts.

As to the stolen treasure, an express pouch was later found near Lower Springs with all the letters intact; however, the gold was never recovered. Middle Creek is about six miles west of Redding, California.

© Kathy Weiser/Legends of America, updated May 2020