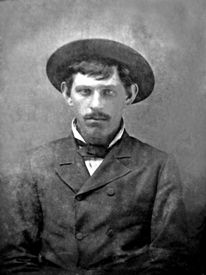 David Rudabaugh was born in Fulton County, Illinois, in July 1854. However, his family moved to Eureka, Kansas, in 1870. Later he lived in Greenwood County, Kansas, before following the cattle trail west into Colorado. Little is known about his life until he joined the “outlaw trail.”

Nicknamed “Dirty Dave” because he rarely bathed and wore filthy clothes, he came to notoriety in the 1870s as the head of a gang of thieves and rustlers in Texas. But Rudabaugh didn’t limit his thieving to the Lone Star State. When he and his gang robbed a Santa Fe Railroad construction camp in Kansas in November 1877, Wyatt Earp was issued an acting commission as a U.S. Deputy Marshal to pursue the outlaw out of the state.

Following Rudabaugh’s trail for 400 miles to Fort Griffin, Texas, Wyatt Earp visited the Shanssey’s Saloon, asking about Rudabaugh. Owner John Shanssey said that Rudabaugh had been there earlier in the week but didn’t know where he was bound.

He then directed Wyatt to Doc Holliday, who had played cards with Rudabaugh. Wyatt was skeptical about talking to Holliday, as it was well-known that Doc hated lawmen. However, when Wyatt found him that evening at Shanssey’s, he was surprised at Holliday’s willingness to talk.

Doc told Wyatt that he thought that Rudabaugh had back-trailed to Kansas. This first meeting between Earp and Holliday would form their lifetime friendship. Wyatt wired this information to Bat Masterson, and the news was instrumental in apprehending Rudabaugh.

Trying to stay one step ahead of Wyatt, Rudabaugh had, in fact, returned to Kansas but would rob yet another train before being caught. On January 27, 1878, Rudabaugh and five other men unsuccessfully attempted to hold up a train in Kinsley, Kansas. He and his accomplice Edgar West were caught within days by Sheriff Bat Masterson and his posse, which included John Joshua Webb (J.J.). When Rudabaugh went for his gun, Webb stopped him and forced him to surrender. The other four accomplices were arrested later. Rudabaugh then informed on his cohorts and promised to go “straight.” Rudabaugh’s accomplices were sent to prison, but Dirty Dave was soon released, drifting to New Mexico and returning to thievery once again.

In 1879 he reunited with some of his acquaintances from Kansas. For the next six months, they terrorized Las Vegas, New Mexico, committing train and stagecoach robberies as the “Dodge City Gang.” The gang members included “Mysterious Dave Mather,” Joe Carson, “Hoodoo Brown,” the Justice of the Peace, and City Marshal  John Joshua Webb, Rudabaugh’s former enemy in Dodge City.

On October 14, 1879, masked men robbed a train in the Las Vegas area. The robbers made off with $2,085, three pistols, and all the lanterns on the train. Two years later, when Rudabaugh was finally arrested, he would confess to participating in the robbery.

On January 22, 1880, T.J. House, James West, John Dorsey, and William Randall were parading about town, sneering, laughing, and looking for trouble. When they entered the Close & Patterson Variety Hall, Marshal Joe Carson asked them to check their guns, and they refused. A wild gunfight ensued, and Carson was killed immediately, while Deputy “Mysterious” Dave Mather killed Randall and dropped West.

John Dorsey, though wounded, and T.J. House managed to escape. On February 5, the Dodge City Gang learned that Dorsey and House were hiding out at the home of Juan Antonio Dominguez in Buena Vista, thirty miles north of Las Vegas. A posse comprised of J.J. Webb, Dave Rudabaugh, and five other men surrounded the House and called for the men to surrender.

Dorsey and House complied after assurance of protection from the citizens of Las Vegas were given. However, the assurance would be hollow, as, within hours of the men being placed in the Old Town Jail, vigilantes relieved the jailers of the prisoners. Taking them to the windmill on the Plaza to hang, Mrs. Carson opened fire on the men before the vigilantes had a chance to hang them. Escaping justice for this murder, Rudabaugh and the rest of the gang continued to rob and rustle until J.J. Webb was arrested for the murder of Mike Kelliher on March 2, 1880. A lynch mob formed but was held off by the Dodge City Gang with “Dirty Dave” at the helm.

On April 30, Rudabaugh and a man named John Allen burst through the Sheriff’s office to free Webb. Though the jailbreak was unsuccessful, Rudabaugh murdered jailer Antonio Lino in the process. Webb’s sentence was appealed, and commuted to life in prison.

Rudabaugh and Dodge City Gang member Tom Pickett fled to Fort Sumner and joined forces with Billy the Kid. According to some sources, Billy the Kid was afraid of only one man, and that man was Dave Rudabaugh.

On November 30, 1880, Billy the Kid, David Anderson (aka Billy Wilson,) and Rudabaugh rode into White Oaks, New Mexico, and ran into Deputy Sheriff James Redman. Redman hid behind a saloon taking shots at the deputy as several local citizens ran into the street, chasing the fugitives out of town.

As a posse gave chase, the outlaws hid at the ranch of a man named Jim Greathouse, whom they held hostage. Accosted at dawn by a posse, they traded their hostage, Jim Greathouse, for Deputy Sheriff James Carlyle, who volunteered to negotiate with the outlaws in an attempt to give themselves up. Continuing to surround the house, the posse waited for hours. Around midnight, the posse called out that they were going to storm the house. Just then, a crash came through a window, and a man came tumbling out. Shots ripped through the air, and Carlyle lay dead. The bullet could have come from either the outlaws or the posse, but many suspect that the posse killed their own man. The posse abandoned the siege with this accident, and the outlaws escaped. Later, Billy the Kid would be blamed for killing Carlyle.

Trailed by the resolute Pat Garrett, Billy the Kid, Billy Wilson, Dave Rudabaugh, Tom O’Folliard, Charlie Bowdre, and Tom Pickett rode wearily into Fort Sumner, New Mexico on December 19, 1880, and were confronted by Garrett’s posse which had been hiding in an old post-hospital building. Lon Chambers and several others leaped from cover as Garrett ordered the outlaws to halt. However, several posse members didn’t wait for the outlaws to respond to Garrett’s demand; instead, opening fire on Pickett and O’Folliard, who were riding in front. Pickett and O’Folliard were shot from their saddles, and Rudabaugh’s horse caught a bullet and collapsed. Rudabaugh managed to jump onto Wilson’s horse, and the other outlaws escaped, holing up in an abandoned cabin near Stinking Springs, New Mexico.

Soon, the determined and his posse tracked the outlaws down to Stinking Springs, New Mexico, and surrounded the hideout. Inside of the house were Billy, Charlie Bowdre, Rudabaugh, Tom Pickett and Billy Wilson.

When Bowdre passed before an open window, he was shot in the chest. The siege continued until Rudabaugh finally waved a white flag the next day, and the bandits surrendered. Billy the Kid and his gang were captured on December 23, 1880, and taken to Santa Fe, New Mexico.

In the meantime, Billy the Kid was jailed in Lincoln, New Mexico, where he escaped on April 28, 1881. However, he was soon tracked down and killed by Pat Garrett on July 14, 1881.

Rudabaugh, Webb, and two other men by the names of Thomas Duffy and H.S. Wilson tried unsuccessfully to shoot their way out of jail on September 19, 1881. Duffy was mortally wounded, and their attempt was unsuccessful. However, with Webb, facing life in prison, and Rudabaugh, the threat of hanging were determined.

Two months later, Webb and Rudabaugh and five other men chipped a stone out of the jail wall and escaped from a 7 “x19” hole. Rudabaugh and Webb raced to Texas and then to Mexico, where Webb disappeared. Later Webb returned to Kansas, where he took the name “Samuel King” and worked as a teamster. He died of smallpox in 1882 in Arkansas.

There are two stories as to what became of Rudabaugh, the most common of which are:

On February 18, 1886, Rudabaugh was involved in a cantina card game in Parral, Chihuahua, Mexico, which broke up after accusations of cheating. Rudabaugh and a Mexican man faced off, and Rudabaugh shot him through the head. When another player drew and fired, Rudabaugh put a bullet into his heart. Unable to find his horse, Rudabaugh returned to the cantina, which was now in total darkness. On entering, Rudabaugh was jumped and decapitated. For the next several days, his killers were said to have paraded through town with his head on a pole.

Another story tells that Rudabaugh finally left Mexico with a herd of cattle headed to Montana, where he lived a normal life, married, and fathered three daughters. Later he died an alcoholic in Oregon, in 1928. 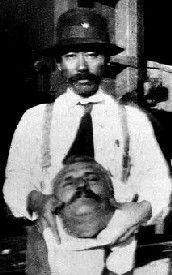