On July 28, 1862, John White and other “Pikes Peaker” members discovered gold in the creek waters where Bannack stands today. It was the beginning for Bannack and the State of Montana, considered one of the last frontiers. The creek was initially named Willard Creek by the Lewis and Clark Expedition when they came through in 1805. But, due to the large grasshopper population in 1862, it was renamed, Grasshopper Creek.

The Colorado prospectors filed one of the first gold claims in what was Idaho Territory at the time and would later become Montana. News of the strike traveled fast, leading to the greatest rush to the West since the California Gold Rush in 1848. A mining camp was quickly built, literally springing up overnight. Most miners lived in tents, caves, dugouts, shanties, huts, and wagons.

Word spread quickly that Bannack’s gold was unlike other gold. Grasshopper Creek’s gold was 99-99.5% pure, compared to most gold at 95%, and miners continued to flood the area. Bannack quickly became known as the New Eldorado of the North, and by October, the camp was called home to more than 400 prospectors. 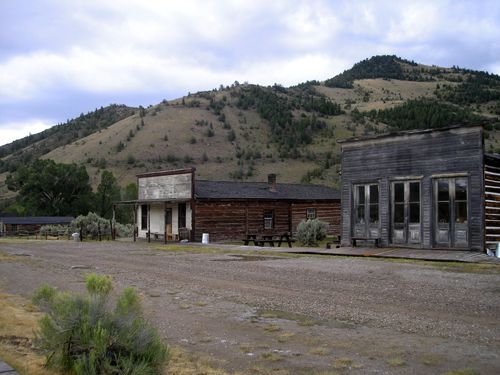 The people who rushed to Bannack were not only miners; they also included many deserters of the Civil War, outlaws, and businessmen intent on profiting from the many newcomers. These early settlers arrived by wagon, stagecoach, horseback, steamboat, and even by foot in search of their fortunes. Not anticipating the harsh Montana winter, many came ill-prepared and lacking supplies, creating great hardship for these early pioneers.

As in most mining towns, Bannack’s population consisted mostly of men, except for saloon girls and “painted ladies.” For the few wives living in the camp, dances were their only social activity and relief from household duties.

By 1863, the settlement had gained some 3,000 residents and applied to the U.S. Government for the name of Bannock, named for the neighboring Indians. However, Washington goofed it up, spelling the name with an “a” – Bannack, which it still retains.

In addition to its gold reputation, Bannack quickly gained a reputation for lawlessness. The roads in and out of town were home to dozens of road agents, and killings were frequent. In January 1863, Henry Plummer arrived in Bannack and was elected sheriff just months later in hopes that he might bring peace to the lawless settlement. What was not known by the citizens of Bannack was that Plummer would later be suspected of being the leader of the largest gang of area road agents.

This group of bandits referred to themselves as the “Innocents” and grew to include more than 100 men. According to Plummer’s accusers, his contacts as sheriff gave him knowledge of when people were transporting their gold, which he would pass on to his gang.

In May 1863, a group of miners discovered gold in Alder Gulch, about 80 miles east of Bannack. When they took their gold to Bannack to buy supplies, word soon leaked out, and many of the area prospectors headed to Alder Gulch, which would soon become the thriving settlement of Virginia City.

The road between Bannack and Virginia City became very hazardous as the road agents targeted the travelers journeying between the two mining camps. The ambitious Sheriff Plummer allegedly extended his operations to Virginia City when he was appointed U.S. Deputy Marshal for the region of Idaho Territory east of the mountains in August of 1863. Violent holdups became even more commonplace, and about a hundred men were murdered in 1863.

By December 1863, the citizens of Bannack and Virginia City had had enough of the violence. Men from Bannack, Virginia City, and nearby Nevada City met secretly and organized the Montana Vigilantes. Masked men began to visit suspected outlaws in the middle of the night, issuing warnings and tacking up posters featuring a skull-and-crossbones or the “mystic” numbers “3-7-77, which some have said was the measurement for a grave, 3 feet wide, seven feet long, 77 inches deep. While the exact meaning of these numbers remains elusive, the Montana State Highway patrolmen wear the emblem “3-7-77” on their shoulder patches today.

The vigilantes dispensed rough justice by hanging about twenty-four men. When one such man, Erastus “Red” Yager, who was about to be hanged, pointed the finger at Sheriff Henry Plummer as the gang’s leader, all hell broke loose.

The residents were divided on whether or not Plummer was part of the murderous gang. But, one night, the vigilantes decided he was guilty after heavy drinking in a local saloon and tracked him down. On January 10, 1864, 50 to 75 men gathered up Plummer and his two principal deputies, Buck Stinson and Ned Ray. The three were marched to the gallows, where the two deputies were hanged first. According to one legend, Plummer promised to tell the vigilantes where $100,000 of gold was buried if they would let him live. However, the vigilantes ignored this as they hoisted him by the neck.

Interestingly, even after Plummer and several of his henchmen were hanged, the robberies did not cease. In fact, the stage robberies showed more evidence of organized criminal activity, more robbers involved in the holdups, and more intelligence passed to the actual robbers. Many historians today think that the story of Plummer and his gang was fabricated to cover up the real lawlessness in the Montana Territory – the vigilantes themselves.

By May 1864, Sidney Edgerton, the territorial Chief Justice, decided there were so many people in the area that they needed a new territory. Edgerton convinced the president, and on May 26, 1864, it was made official, with Edgerton as the governor. Bannack became the first territorial capital, and the Legislature of Montana met in Sidney Edgerton’s cabin.

In the summer of 1864, the number of school-age children had increased dramatically, and the Edgerton home could no longer accommodate the classes. A crude log cabin was built to serve as teacher Lucia Darling’s schoolhouse.

By the fall of 1864, nearly ten thousand people crowded along the area hillsides, living in tents, shacks, lean-tos, and eventually sturdier housing. Settlements were so numerous and scattered that people called the area the “fourteen-mile city.” But, for these thousands of people, the gold was already getting harder to find. 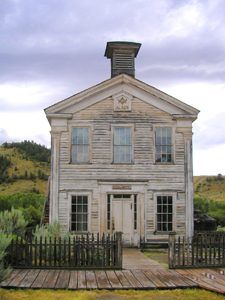 By 1866, Virginia City in Alder Gulch was large enough to take the title of territorial capital from Bannack, where it remained until 1877 before permanently moving to Helena.

In the meantime, the vigilantes continued their antics, and three years after Sheriff Plummer was hanged, the vigilantes virtually ruled the mining districts. Finally, leading citizens of Montana, including Territorial Governor Thomas Meagher, began to speak out against the ruthless group. In March 1867, the miners issued their own warning that if the vigilantes hanged any more people, the “law-abiding citizens” would retaliate “five for one.” Though a few more lynchings occurred, the era of the vigilantes was passed.

By 1870, there were no more easy diggings in, and within just a couple of years, the population of Bannack shrank to just a few hundred.

In 1874, realizing the need for a better school, Bannack Masonic Lodge No. 16 built a combination lodge and schoolhouse. Classes would be held in this building for nearly 70 years.

In 1875, the Beaverhead County Courthouse was built, which still stands in Bannack today. In August 1877, the courthouse played a role in one of the most exciting events in Bannack’s history when the town was threatened with an Indian attack. 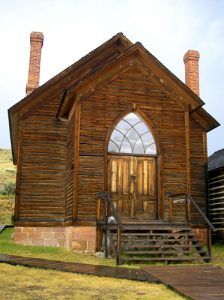 Chief Joseph and the Indians had just defeated General Gibbon at the bloody Battle of the Big Hole. Word reached the isolated community that the Indians were on the rampage and headed straight for Bannack. People from around the area gathered in Bannack to seek protection. Two lookouts were built on the highest points of the hills on either side of Hangman’s Gulch for early warning. In case of a siege, the local water supply was barricaded. The women and children were gathered in the brick fortress. Some stories tell of hiding the children in the safes located inside the courthouse. Although the Indians killed four settlers in Horse Prairie, they never came close to Bannack.

At the time, there was no church in Bannack, and a Methodist circuit preacher named William Van Ordsdel used the Indian scare to convince the townspeople to build a church as thanks for God’s deliverance. The church still stands in Bannack today.

In 1881, nearby Dillon became the county seat, and the courthouse was abandoned. The building remained empty until 1890, when it was purchased by Dr. John Meade, who remodeled it as a plush hotel. However, by this time, Bannack was called home to only about 400 people, and the hotel was closed several times over the years, reopening whenever mining activity revived.

In 1895, Bannack was revived for a time when the first electric dredge was invented. In no time at all, Grasshopper Creek supported five of them for the next ten years. Unfortunately, it was these very same dredging operations that destroyed several hundred of the many buildings that had been erected in the 1860s. 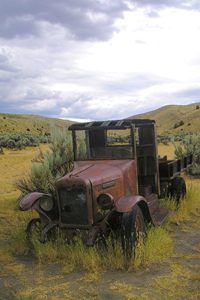 By the 1930s, the businesses and social community had left Bannack, and very few people remained. By the 1940s, there would be so few students that the school would have to close, and Bannack became a ghost town.

Bannack survives due to the good graces of the Montana Department of Fish, Wildlife, and Parks, who saved the town from the elements and vandalism by making it a state park on August 15, 1954.

Today, over sixty structures remain standing, most of which can be explored. The staff preserve, rather than restore, the buildings of this old town, allowing visitors an opportunity to relive the American West.

Bannack Days, with historic displays, activities, and events, is held the third weekend in July each year. The visitor center is open from mid-May through September. A group picnic site is available. The park is 5,800 feet in elevation and is 1154 acres in size. There are 28 sites in the campground with vault toilets, grills/fire rings, firewood, picnic tables, trash cans, drinking water, and access to Grasshopper Creek for fishing. Flush toilets are located in the visitors’ center and escorted, and unescorted tours are available. 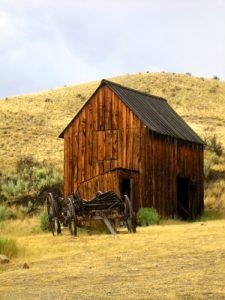 Barn and wagon found in the ghost town of Bannack by Kathy Alexander.