The gang was notorious for robbing and rustling cattle in northern New Mexico while escaping back to the Silverton, Colorado area. Their efforts soon spawned an all-out feud, sometimes referred to as the San Juan County War, with the Simmons family in Farmington, New Mexico. The Simmons family accused the Stocktons of stealing their cattle and selling the beef to army posts. The “war” erupted into full-scale shoot-outs and lynchings in 1880.  In fact, Stockton’s “business” was so profitable; they flaunted themselves, even opening a butcher shop in Animas City (Durango). In the meantime, almost two dozen ranchers in the Farmington area had begun to side with the Simmons, guarding their property night and day against the cattle rustlers. 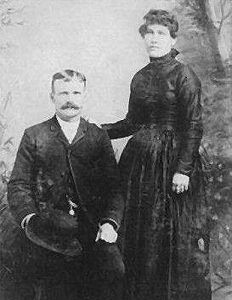 Port Stockton and his wife, Emily.

Meanwhile, the gang was posing as prosperous cattlemen in Animas City, Colorado, where the people of that city stood behind them, partly because Port Stockton served as the town marshal and partly because they believed the men were what they said they were.

On April 16, 1880, a man was lynched in Animas City, and the very next day, while the body was still dangling from a tree, the town was besieged by a band of 25-50 armed men calling themselves the Farmington Vigilante Committee. In no time, rifle shots were ringing throughout the dirt streets while its citizens hid from the violence. Afterward, Animas City no longer believed in their “prosperous cattlemen” and soon drove the gang out of town.

On January 10, 1881, Port Stockton was killed by a rancher in Farmington named Alfred Graves. The rest of the gang next headed to Silverton, Colorado, where on August 24, 1881, one of the gang members, Bert Wilkinson, killed Marshal Clate Ogsbury. When a $2,500 reward was offered for his arrest, scoundrel leader, Ike Stockton, turned in his own gang member to secure the reward money. Nineteen-year-old Wilkinson was arrested and lynched on September 4th.

But, the local law certainly didn’t see Stockton as any kind of hero. They soon dug up a New Mexico warrant for Ike for the murder of a man named Aaron Barker in 1881. When Silverton Deputy Sheriff Jim Sullivan went to arrest Ike, the scoundrel resisted, and the deputy shot him in the leg. The outlaw died after having his leg amputated on September 27, 1881. Later, it was said that Deputy Sullivan claimed to hate a traitor more than a murderer.