“He has not one single redeeming feature; he is the only criminal I know of who does not have one single good point.” 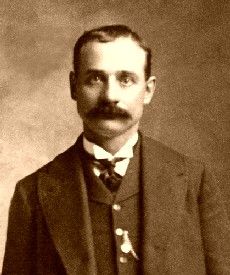 Better known as “Kid Curry,” Harvey Alexander Logan, an orphaned cowboy originally from Iowa, would grow up to be a rustler, gunman, bank, and train robber and known to be one of the “wildest” of Butch Cassidy’s outlaw gang, the Wild Bunch.

Born in 1867 in Tama County, Iowa, to William A. and Eliza J. Logan, Harvey was the third of six children. When his father died, his mother moved the family to Dodson, Missouri, a small town outside Kansas City.

Unfortunately for the children, it wasn’t long before their mother also died in 1876. They then lived with their aunt and uncle, Lizzie and Hiram Lee. Not long after, Harvey moved with three of his brothers to Texas, where he first made his living breaking horses at the “Cross L Ranch” near Big Spring.

Somewhere along the line, he befriended a man named “Flat Nose” George Curry, from whom he took his new last name. His brothers soon also adopted the same last name.

In 1883, at the age of 16, Logan rode with a cattle drive to Pueblo, Colorado, where he was involved in a saloon brawl. To avoid the law, he headed to southern Wyoming. The following year, Harvey, along with brothers Johnnie and Lonnie, was homesteading a horse ranch in Chouteau County, Montana, just south of the Landusky Mining Camp.

On October 2, 1894, Harvey and Johnnie Logan, along with their brother-in-law, Lee Self, got into an altercation with a neighbor named James Ross. As a result of the confrontation, Harvey found himself charged with assault with a deadly weapon. It was just the first of many incidents that would drive Logan into a life of outlawry.

The following incident occurred when local miner Powell “Pike” Landusky attacked Harvey, believing he was romantically involved with his daughter. When Logan got the better of Landusky, the miner filed assault charges against him and was arrested and beaten. Though a judge released him at the inquest, indicating the assault appeared to be self-defense, a formal trial date was set on the charges. When Harvey ran into Landusky in a local saloon, the two got into a dispute that quickly escalated into a fistfight. However, when Logan began to walk away, Landusky pulled a gun and threatened the unarmed bad boy. His brothers quickly provided him with a pistol, and when the ultimate gunfight erupted, Landusky’s gun jammed, and Harvey shot him in the head.

Sure that he would never get a fair trial for the killing, Logan fled. Later, Landusky’s daughter would announce that she was pregnant, but with Harvey’s brother Lonnie’s child rather than his.

With the law on his tail and a bounty on his head, Logan fled to New Mexico, where he rode with the Black Jack Ketchum Gang.

Harvey returned to Montana when he received word that a friend of Landusky’s, a rancher named James Winters, had been trying to get the reward on his head. In January 1896, Harvey, along with brothers, Johnnie and Lonnie, confronted Winters at his ranch. When a shootout erupted, Johnnie was killed.

Harvey and Lonnie returned to New Mexico, joining Black Jack Ketchum’s gang again. However, when the brothers argued with Thomas “Black Jack” Ketchum over the take in a train robbery, the pair left the gang.

The brothers then headed to Colorado, working on a ranch near Sand Gulch. Before long, however, Harvey started another gang that included brother Lonnie, Walt Putman, Tom O’Day, and his old friend, George Curry. In April 1897, Harvey was involved in the killing of Deputy Sheriff William Deane of Powder River, Wyoming, when he and his gang were rustling horses.

A few months later, Harvey Logan and his gang robbed a bank in Belle Fourche, South Dakota, in June. Fellow bandit Tom O’Day was captured when his horse spooked and ran away. The others escaped but were soon caught up in Fergus County, Montana. During the inevitable shootout, Logan was shot through the wrist and was captured. Also apprehended were Walt Putnam and George Curry. The bandits were jailed in Deadwood, South Dakota but escaped on October 31, 1897. 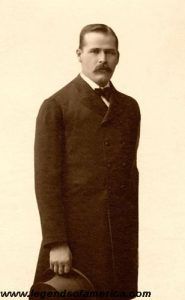 On July 14, 1898, Logan joined Sundance Kid and Flat Nose” George Curry in the robbery of a Southern Pacific shortly after it pulled out of the Humboldt House train station in Humboldt, Nevada. Much to their disappointment, however, they only made off with about $450 before getting away.

On June 2, 1899, the Wild Bunch robbed a Union Pacific Railroad overland flyer near Wilcox, Wyoming. Aggressively pursued, a gunfight erupted between the trailing posse and the robbers, and Sheriff Joe Hazen was killed. The gang escaped to the Hole-in-the-Wall hideout on the Colorado/Utah border. Pinkerton detective Charles Siringo was tasked with bringing in the outlaw gang.

Logan later went to New Mexico, along with Butch Cassidy and several others. On July 11, 1899, Harvey, Elza Lay, and Sam Ketchum robbed a train near Folsom, New Mexico. A posse led by Sheriff Ed Farr cornered the gang near an area called Turkey Creek, which resulted in a gun battle that wounded both Elza Lay and Sam Ketchum. Sheriff Ed Farr was killed, and his deputy, Henry Love, was also wounded. Later, Sam Ketchum and Deputy Love would die from their wounds. Logan and Butch Cassidy were able to escape.

Harvey fled to San Antonio, holed up in Fannie Porter’s Brothel. There he met Della Moore, better known as Annie Rogers. The two began an affair that would last over the next several years. 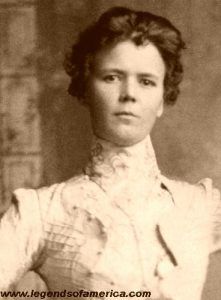 On February 28, 1900, when lawmen attempted to arrest Lonnie Curry while visiting his aunt in Dodson, Missouri, the outlaw was killed in a gunfight. Harvey was angry and even more upset when his friend Flat Nose” George Curry ” died at the hands of the law just two months later. On April 17, after Curry had been rustling cattle near Moab, Utah, he was chased down by Sheriff Jesse M. Tyler, and Curry was shot and killed.

In March, Harvey and Will Carver were recognized in St. Johns, Arizona, when Harvey passed notes suspected of being from the Wilcox Robbery. Local Sheriff Edward Beeler went after the pair. When Deputies Andrew Gibbons and Frank LeSeuer caught up with the pair on March 28, the outlaws shot them dead.

On the run, Harvey and Will Carver made their way towards Alma, New Mexico, where fellow Wild Bunch members Butch Cassidy and Elza Lay worked on the WS Ranch. Along the way, Sheriff George Scarborough and cattleman Walter Birchfield began to follow their trail. But, the “Kid” was too smart for them. Discovering they were being followed, he and Carver ambushed the pair on April 5, wounding Birchfield and killing Scarborough.

Before long, Logan set out to settle the score with the men who had killed his friend, George Curry, and headed north. On May 26, Harvey rode into Moab, Utah, and killed Grand County Sheriff John Tyler and his deputy, Sam Jenkins.

Harvey then rejoined the Wild Bunch, and on August 29, 1900, the gang robbed a train near Tipton, Wyoming, taking some $55,000. Afterward, the gang split up with Logan and Ben Kilpatrick, heading to Fort Worth, Texas.

Meanwhile, Butch Cassidy, the Sundance Kid, and Will Carver robbed the First National Bank in Winnemucca, Nevada, on September 19, making off with about $2,000.

The following year, several members of the Wild Bunch met up the Hell’s Half Acre area of Fort Worth, Texas, for a celebration. While there, Harvey Logan, Will Carver, Butch Cassidy, Ben Kilpatrick, and the Sundance Kid made the mistake of posing for a portrait. When the Pinkertons learned of the photograph, it was soon found on hundreds of wanted posters across the nation.

In April 1901, William Carver was ambushed by Sheriff Elijah Briant and his deputies at Sonora, Texas, and was shot. He died from his wounds three hours later.

Harvey and several Wild Bunch members returned north, and the gang robbed a Union Pacific train near Wagner, Montana, on July 3, 1901. This time, they “hit the big time,” making off with an estimated $40,000.

The gang split up, going the various directions, but Harvey was not yet done with his revenge. On July 26, 1901, he shot and killed Jim Winters, who killed his brother John in 1896.

Logan then headed to Tennessee, where in October, his girlfriend, Annie Rogers, was arrested in Nashville for passing notes from the Montana robbery.

On December 13, 1901, Logan killed two Knoxville policemen, William Dinwiddle and Roberty Saylor, when they tried to apprehend him.

Despite being pursued by Pinkerton agents and other law enforcement officials, Curry returned to Montana.

Curry then traveled back to Knoxville. On November 30, 1902, Curry was captured in a pool hall after a lengthy physical fight with lawmen. He was convicted of robbery because facts in the murder of the two policemen were not definite and no witnesses would testify, and he received a sentence of 20 years of hard labor and a $5,000 fine. On June 27, 1903, Curry escaped. Rumors that a deputy had received an $8,000 bribe to allow his escape spread, but this was never proven.

A year later, he participated in robbing the Denver & Rio Grande train near Parachute, Colorado, on June 7, 1904. Two days later, a posse caught up with the outlaws, and in the confrontation, Logan was wounded. However, rather than go to prison, he took his own life. He was 37 years old when he died on June 9, 1904.

During his lifetime, Harvey Logan was wanted on warrants for 15 murders, but it was generally said that he had killed more than twice that number, although some historians put the actual number killed at nine. William Pinkerton, head of the Pinkerton Detective Agency, called Logan, a.k.a. Kid Curry,  the most vicious outlaw in America. “He has not one single redeeming feature,” Pinkerton wrote. “He is the only criminal I know of who does not have one single good point.” 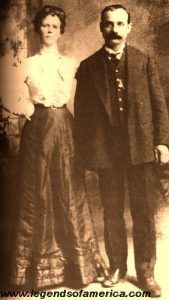 Annie Rogers and the Bank Dick