“I regard myself as a woman who has seen much of life.”

– Belle Starr stated to The Fort Smith Elevator about one year before her death. 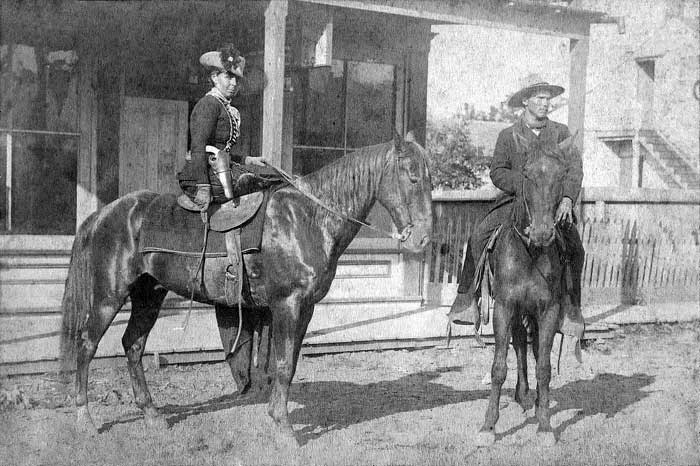 Belle Starr was born Myra Belle Shirley in a log cabin near Carthage, Missouri, on February 5, 1848, to “Judge” John Shirley and his third wife, Elizabeth Pennington. Her father was the black sheep of a well-to-do Virginia family who had moved west to Indiana, where he married and divorced twice. His third wife, Eliza, was on the Hatfield side of the feuding Hatfield and McCoy families.

After they married, the Shirleys moved to Missouri in 1839, where John prospered raising wheat, corn, hogs, and horses in Jasper County. Myra’s older brother, John Allison “Bud,” was born to the Shirleys in 1842, and a younger son, Edwin, in 1850. The next ten years were a financial success for the Shirleys, who had two more sons.

In 1856, they sold their land and moved to Carthage, Missouri, where they built an inn, a tavern, livery stable, and blacksmith shop—their businesses taking up almost an entire city block. John Shirley had become a respected member of the burgeoning county seat of Carthage. 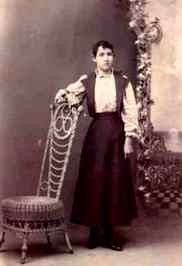 At first, Myra Belle lived the life of a spoiled, rich girl, attending the Carthage Female Academy, where she was taught music and classical languages in addition to the basics. She was a bright student with polite manners and a talent for playing the piano. However, she also liked to flaunt her status as a “rich girl” and liked having an audience. She also loved the outdoors, where she spent many a day roaming the countryside with her older brother Bud, who taught her how to ride a horse and handle a gun.

However, her life changed dramatically when the Kansas-Missouri Border War broke out. Jasper County watched both armies pass through time and again, forcing residents to take sides and making neighbors into bitter enemies. Irregular bands of “Jayhawkers” and “Red Legs” laid waste to Missouri communities in support of the Union.

When son Bud joined Quantrill’s Raiders, John Shirley was a proud father. Bud, who knew the area and the people well, served admirably as a scout, quickly attaining a captain’s rank.

But in June 1864, Bud was killed in Sarcoxie, Missouri. The raids had taken their toll on Shirley’s businesses, and after Bud’s death, the “Judge” gave up, sold his Missouri property, and moved his family to a farm near Scyene, Texas, a small settlement southeast of Dallas.

In 1866 the James-Younger Gang robbed their first bank in Liberty, Missouri, and fled with $6,000 in cash and bonds. Splitting up, Jesse and Frank James and the Youngers fled to Texas, where they met up with Myra Shirley. Soon, Myra became smitten by Cole, quickly becoming a member of their “gang.”

One of these outlaw bands, seeking refuge, stayed at the Shirley house one night. Belle later stated that it was there that she became reacquainted with the first man she ever loved. His name was Jim Reed, and she had first met him back in Missouri, where the Reed and Shirley families had been friends. The romance blossomed in Texas, and Belle and Jim married on November 1, 1866.

The Shirleys had no objection to the marriage, as Jim Reed was not yet a wanted man. Jim moved into the Shirley household near Scyene and shared the farm chores. Later, he became a salesman for a Dallas saddle and bridle maker. By late 1867, though, he and Belle lived on the Reed homestead in Missouri. Early in September 1868, Belle gave birth to her first child, Rosie Lee. Belle adored the baby and referred to her as her “Pearl.” The nickname stuck. 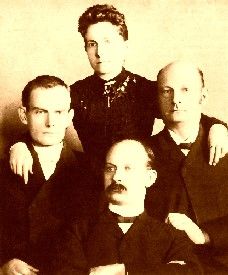 The presence of Cole Younger at the Shirley residence has led to the fiction that he seduced Belle and she bore his illegitimate daughter. Younger admitted that he did visit the Shirleys in Texas, but in 1864, not 1866. He stated that the next time he saw Belle was at the Reed residence in Missouri in 1868. She was six months pregnant with her first child. Some authors insist this denial was the response of a “Southern gentleman,” but a manuscript compiled by Richard Reed, younger brother of Belle’s husband, supports Younger’s story.

When Jim and Belle moved to Missouri, Reed was a wanted man, allegedly for murdering a man named Shannon. The two fled to California with their young daughter Pearl and before long, a second child came along, who they named Edward.

In 1869 Belle, Reed, and two other outlaws rode to the North Canadian River country, where they tortured an old Creek Indian until he told them where he had hidden $30,000 in gold. With their share of the loot, Jim and Belle returned to Texas, where she played the role of “Bandit Queen” to the hilt.

But, it wasn’t long before the outlaw life caught up with Reed, and in August 1874, Reed was killed in a gunfight by a member of his own gang. Belle left her children with her mother while she rode the outlaw trail. In Indian Territory (what is now Oklahoma,) Starr got involved with a flat-faced Indian outlaw who went by the name of “Blue Duck.” 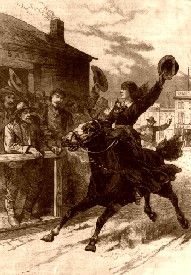 However, that affair was short-lived when his place was taken by Sam Starr, a tall, slim Cherokee. The honeymooners settled down on Sam’s sixty-two acres on the north side of the Canadian River, near Briartown. Belle named the place Younger’s Bend, reported in honor of Cole Younger.

The bandit couple formed a gang around themselves and, from their hide-away on the Canadian River, entered upon a life of rustling, horse stealing, and bootlegging whiskey to Indians. The brains behind these operations, carefully planning each move, was the woman who was now known as Belle Starr.

Belle herself told a story of how a slim man with blinking eyes once visited her and Sam at Younger’s Bend. Starr was suspicious of the cold and silent man, but Belle told him he was an “old friend from Missouri.” Sam Starr never knew the blinking blue-eyed man was Jesse James.

Sam and Belle found the bandit life very lucrative. She would use her money liberally to bribe the freedom of any gang members who were captured. Failing this, she would tempt the lawmen with her womanly charms, almost always achieving her ends – the release of compatriots.

The nearest settlement to the Starr gang’s operation was Fort Smith, Arkansas. The local Magistrate was the famed Judge Isaac Parker – the hanging Judge. Parker became determined to put Belle Starr behind bars. Several times his Deputies had brought Belle in to face various charges like rustling or bootlegging. Yet, each time she was set free due to lack of evidence. However, in the fall of 1882, Parker got lucky when Belle was caught red-handed as she attempted to steal a neighbor’s horse. After a trial, he sentenced Belle to two consecutive six-month prison terms and Sam to one year in the Federal Prison in Detroit. After serving their time, Belle and Sam returned to Younger’s Bend. 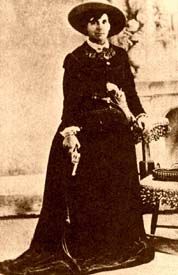 However, their time behind bars did nothing to change their lawless ways. Upon release, they immediately returned to a life of rustling and bootlegging. In 1886 Belle and Sam were again arrested by United States marshals, who brought them to Fort Smith on charges of robbery and horse stealing. The Starrs were arraigned the following day before Judge Parker, but the hanging judge was forced to dismiss the charges for lack of evidence.

By this time, Belle had become a celebrity. Richard Fox’s Police Gazette had turned her into a western folk hero, “a female Robin Hood and a Jesse James.” She was dubbed the “Bandit Queen.” After she left prison, Belle briefly worked in a Wild West show playing the part of an outlaw bandit who held up a stagecoach.

On December 17, 1886, Sam Starr got into a gunfight with an old nemesis Frank West during a friend’s Christmas party. Both men hit their marks and died of their wounds.

But Belle did not remain alone for long. In 1889 Belle entered into her third marriage with a much younger bandit by the name of Jim July. This marriage, however, would be the death of her. The relationship was particularly stormy. After one fierce quarrel, July was reported to have offered an accomplice $200 to kill his wife. When the offer was rejected, July screamed,” Hell – I’ll kill the old hag myself and spend the money for whiskey!” A few days later On February 3, 1889, Belle Starr was shot to death from an ambush on a lonely country road. She was 41 years of age. 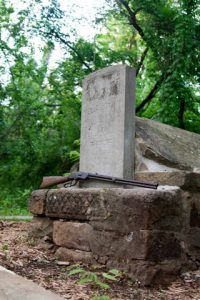 An investigation was made into her death and several suspects were questioned, including a neighbor she had quarreled with named Watson, her husband July, her son Ed, and even her daughter Pearl. Apparently, Belle had caught July fooling around with a young Cherokee girl, which had led to much discord in the marriage. Belle was estranged from her son Ed and rumors speculated she may have had an incestuous relationship with him and routinely beat him with a bullwhip. Even Pearl might have killed her mother because Belle had interfered with Pearl’s marriage to the father of her child.

A few weeks after Belle’s death, a deputy on July’s trail mortally wounded him.

Belle was buried in the cabin’s front yard at Younger’s Bend. Pearl hired a stonecutter to mount a monument over her mother’s grave months later. On top of the stone was carved an image of her favorite mare, “Venus.” On the stone was this inscription:

Shed not for her the bitter tear
Nor give the heart to vain regret,
‘Tis but the casket that lies here,
The gem that fills it sparkles yet.

From 1875 to 1880, Belle was the undisputed leader of a band of cattle and horse thieves who made their headquarters in the Oklahoma Territory.

James-Younger Gang – Terror in the Heartland