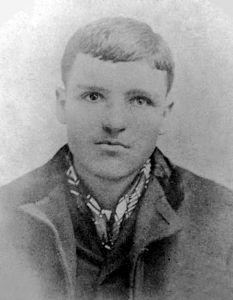 The Rogers Brothers Gang, led by Bob Rogers, terrorized Oklahoma and Kansas in the 1890s. The gang was involved in stealing horses, rustling cattle, and robbing stores, post offices, banks, and trains.

Brothers Bob, Sam, and Jim Rogers, who were 1/4 Cherokee, moved with their father, Frank Rogers, from Arkansas to the Cherokee Nation of Oklahoma when they were boys. They settled on Big Creek near Horshoe Mound about 20 miles south of Coffeyville, Kansas. Bob, the oldest of Frank’s sons, was born in about 1873, his brother Same in about 1875, and Jim in about 1877. When Bob was old enough, he began working as a cowboy on a ranch near Nowata. He was first arrested on November 10, 1891, charged with assault with intent to kill, and taken to Fort Smith, Arkansas. He was released on bond within a few days and returned to Oklahoma.

Said to have been impressed by the Dalton Gang, he soon began to put together his own gang, which was first comprised of Bob Stiteler, Willis Brown, “Dynamite Jack” Turner, and his brother “Kiowa” Turner.

In the summer of 1892, they were suspected of stealing horses in the Cherokee Nation and selling them in Arkansas. All five men were then arrested by U.S.  Deputy Marshal Hickman “Heck” Bruner and his posse and escorted to Fort Smith. Judge Isaac Parker first sentenced Rogers to the federal reformatory but pardoned him because he was only 19.

On November 3, 1892, Bob Rogers got into an argument with Cherokee Indian Police Deputy Jess W. Elliott in a pool hall in Catoosa, Oklahoma. Both men were drunk, and the dispute soon escalated to violence, with Rogers knocking Elliott to the floor and beating him severely. When the deputy recovered enough, he got on his horse and rode out of town. But Rogers was lying in wait by the side of the road, and when the officer came by, he pulled him from his horse and slit his throat and left him beside the road. The lawman’s body was found by several people a short time later, and one went to summon authorities. As the rest of the group waited, Rogers returned and began to kick and stomp the lifeless body and rummaged through his clothes before taking off again. The next day, Rogers was tracked by lawmen to Sapulpa, where they were told he had fled westward.

Bob then kept a low profile until June 30, 1893, when the Rogers Gang, which now also included Bob’s younger brothers, Jim and Sam, and another man named Ralph Halleck, rode to the Frisco railway at Chelsea, Oklahoma, and forced the agent to open the safe, making off with $418. A few days later, the gang hit the railroad depot at Bluejacket, Oklahoma, and again robbed the station safe. Bob then led the gang into southern Kansas, where they robbed the Mound Valley Bank at Labette, Kansas, on July 13, 1893, making off with $800.

These crimes drew the attention of Judge Isaac Parker, who assigned U.S. Deputy Marshal Heck Bruner to track the outlaws down. On July 29, 1893, Bruner and his posse caught up with Sam Rogers and Ralph Hedrick at a farm a few miles west of Vinita. When the men resisted arrest, gunfire erupted, and Hedrick was killed, and Sam Rogers had been shot in the hip. Sam afterward lived with his father as a helpless cripple.

The Rogers Gang struck next on December 22, 1893, when they attempted to rob a Missouri, Kansas & Texas train near Kelso, Oklahoma. The outlaws were unsuccessful when the engineer sped the train through the siding, but a member of the crew took a bullet. Then, on December 24th, they struck again, robbing the Arkansas Valley passenger train at Seminole, Oklahoma robbing the express car and the passengers.

On January 8, 1894, U. S. Deputy Marshal W. C. Smith surprised Bob Rogers and Bob Stiteler at the home of Henry Daniels, Rogers’ brother-in-law. Stiteler was captured and taken to Fort Smith. Later it was revealed that Rogers had turned him in for the reward money.

On January 24, U.S. Deputy Marshal Heck Bruner and a posse tracked the gang down to their hideout on Big Creek a few miles west of Centralia. In the ensuing gunfight, Kiowa Turner was killed, his brother Dynamite Jack was captured, and Willis Brown was wounded so badly that he died as he was being transported to Fort Smith. 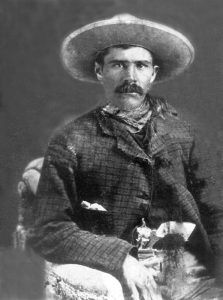 In the early morning of March 17, 1894, U.S. Deputy Marshal Jim Mays and a large posse comprised of members of the Anti-Horse Thief Association Bob Rogers’ father’s house near Horseshoe Mound. A fierce gunfight ensued during which several hundred rounds were fired. After posse member W.D. McDaniel was fatally wounded, Bob agreed to surrender, but when he stepped on the front porch, he raised his rifle and died in a hail of bullets.

The last and youngest of the gang to be captured was Jim Rogers. The 22-year-old was apprehended by the Anti-Horse Thief Association members in May 1901 and sent to federal prison.