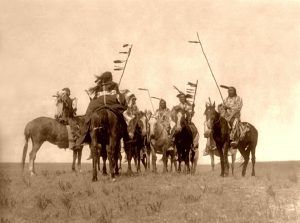 Guale – Guale was a historic Native American chiefdom of Mississippian culture peoples located along the coast of present-day Georgia and the Sea Islands. Spanish Florida established its Roman Catholic missionary system in the chiefdom in the late 16th century. During the late 17th century and early 18th century, Guale society was shattered by extensive epidemics of new infectious diseases and attacks by other tribes. Some of the surviving remnants migrated to the mission areas of Spanish Florida while others remained near the Georgia coast. Joining with other survivors, they became known as the Yamasee, an ethnically mixed group that emerged in a process of ethnogenesis. See full article HERE.

Hidatsa – Also known as the Minitari and a band of the Gros Ventre, the Hidatsa spoke a Siouan language. Occupying several agricultural villages on the upper Missouri River in North Dakota, they were in close alliance with the Arikara and the Mandan tribes.

Ho-Chunk – Also known as Hoocaagra or Winnebago, the Ho-Chunk are a Siouan-speaking Native American people whose historic territory included parts of Wisconsin, Minnesota, Iowa, and Illinois. Today there are two separate federally recognized tribes including the Ho-Chunk Nation of Wisconsin and Winnebago Tribe of Nebraska.

Hohokam – Around 400 B.C., these Indians migrated from northern Mexico and settled at a place now called Snaketown, near Phoenix, Arizona. This group, who lived in pit houses, wisely invented an early form of irrigation, digging canals up to ten miles in length, then damming and directing the water through rows of crops. They made pottery using a unique dye from the saguaro cactus. Their culture lasted almost 2,000 years and are most likely the ancestors of the Pima and Papago tribes.

Hopi  – The Hopi occupancy of Arizona makes it the longest authenticated history of occupation of a single area by any Native American tribe in the United States. The Hopi located their villages on mesas for defensive purposes but the land surrounding the mesas was also utilized by clans, families, medicinal and religious purposes.

Houma – Originally the Houma were from east-central Mississippi and were of the Chakchiuma. By 1682 the Houma had separated from the Chakchiuma and were living a few miles inland from the east bank of the Mississippi River just below the present border between Mississippi and Louisiana. Over time, they drifted south into Terrebonne and Lafourche Parishes southwest of New Orleans. Most of their descendants are still there today and live in or in the vicinity of Montagne, Golden Meadow, and Dulac-Grand Caillou. 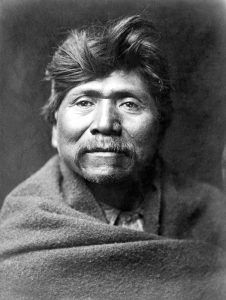 Hualapai, aka: Walapai – The Hualapai, meaning “People of the Tall Pine,” have lived along the Colorado River and the Grand Canyon for centuries. Their tribal capital is located at Peach Springs, Arizona, with a total population of some 1,600 members. Their economy is based on tourism, river-rafting, cattle-ranching, hunting expeditions, and timber-cutting, as well as crafting of traditional and modern folk arts.

Huron – Many people today do not realize that Huron and Wyandot are the same people. Originally, more than a dozen Iroquoian-speaking tribes of southern Ontario, they referred to themselves as Wendat meaning “island people” or “dwellers on a peninsula.” 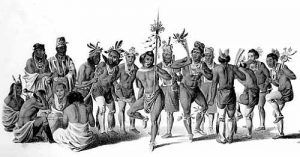 lllinois-Illini-Illiniwek – Of the Algonquian languages family, the Illinois Confederation was a group of 12–13 Native American tribes who lived in the upper Mississippi River Valley. The five main tribes were the Cahokia, Kaskaskia, Michigamea, Peoria, and Tamaroa. At the time of European contact in the 17th century, they were believed to have numbered over 10,000 people. However, by 1778 their numbers had dramatically declined due to making wars and diseases. In 1832, the tribes had joined together with the Peoria and ceded all of their remaining territory in Illinois. They are now part of the Peoria Tribe of Oklahoma.

Inuit/Eskimo –  The Inuit are the indigenous peoples inhabiting the Arctic regions of Alaska, Greenland, and Canada, with close relatives in Russia. They are united by a common cultural heritage and a common language. They have over the years been called “Eskimo,” but prefer to be called by their own name “Inuit,” meaning simply “people.” Traditionally, they have relied on fish, sea mammals, and land animals for food, heat, light, clothing, tools, and shelter. According to archaeological research, the origins of the Inuit lie in northwestern Alaska where they lived in houses made of driftwood and sod. Beginning about a thousand years ago, the Inuit began to move eastward into Arctic Canada. Within a few hundred years, they had replaced the earlier inhabitants of the region, a now-extinct people known as Tunit. By about 1250 AD, the first Inuit had entered Greenland through the Smith Sound area in the far northwest of the island. Here, they may have first encountered Viking hunters coming from the Norse colonies in southwest Greenland. In many areas, the old sod and whalebone winter houses were abandoned in favor of houses made of blocks of snow. They were easier to build as they could be put up anywhere, even on the sea ice, and required only an hour or two to construct. Today, the Inuit continue to live in the arctic regions, working in all sectors of the economy, though many still supplement their income through hunting. Tourism is a growing industry as guides take tourists on dogsled and hunting expeditions, and work with outfitting organizations.

Iowa/Ioway – Iowa, or Ayuwha, was a term borrowed by the French from the Dakota that signifies “Sleepy-ones.” The Iowa people are of Sioux stock and closely related to the Otoe and Missouri tribes. They moved about a great deal, mostly in the states of Iowa and Minnesota. Through various treaties with the U.S. Government they lost their lands in Minnesota, and Missouri. The Ioway practiced farming and lived in villages; however, bands that lived farther west adopted more of the customs of the Plains Indians. In 1836, another treaty assigned part of them a reservation along the Great Nemaha River in present-day Brown County, Kansas and Richardson County, Nebraska.

Innu – The Montagnais and Naskapi have different tribal names but consider themselves part of the same culture, Innu. The Innu are indigenous people of eastern Quebec and Labrador, Canada. Most Innu people still live in their traditional territory today, which they call Nitassinan. 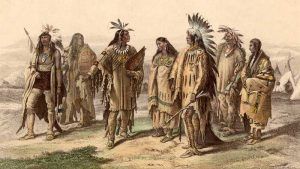 Iroquois – The Iroquois or Haudenosaunee were a powerful northeast Native American confederacy. Before Europeans arrived they lived in New York and Canada. Technically, “Iroquois” refers to a language rather than a particular tribe, but, early on, it began to refer to a “nation” of Indians made up of five tribes, including the Seneca, Onondaga, Oneida, Cayuga, and Mohawk. Later they were joined by the Tuscarora. This group of tribes was known as the Iroquois Confederacy, Iroquois League or the Six Nations. Other tribes of Iroquoian stock that were not part of the Six Nations were the Huron, Tionontati, the Neutral Nation of Ontario; the Erie and Conestoga in Ohio and Pennsylvania and the Meherrin, Nottoway, and Cherokee, of Virginia and Carolina. There are some 80,000 people in the United States today that claim an Iroquois heritage.