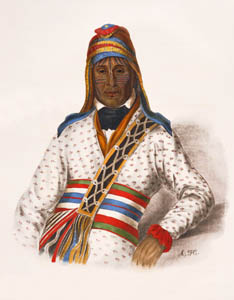 The Eufaula tribe, a Muscogean-speaking people, were part of the Muscogee Creek Confederacy who originally lived in the southeastern United States.

They are thought to have possibly broken off from the Kealedji or Hilibi tribe. Their name is thought to have come from a creek called Euharlee in Georgia that was corrupted from a Cherokee word.

Some Eufaula lived along the Chattahoochee River in Georgia who had settled there possibly before 1733. With more frequent contact with Europeans and later Americans, they adopted some European-style customs.

In 1825 their Chief Yoholo Micco traveled to Washington, D.C. in an attempt to renegotiate the Treaty of Indian Springs, which forced them to move across the river to Alabama. However, the chief was unsuccessful.

In 1836 they were forced further west to Indian Territory, with the rest of the Creek Indians during the Trail of Tears, and in what is now called Eufaula, Oklahoma.

During the summer and winter of 1836 and 1837, over 14,000 Creek Indians made the three-month journey to Oklahoma, a trip of over 800 land miles and another 400 by water.  Most left with only what they could carry wearing inadequate clothing for the winter travel. 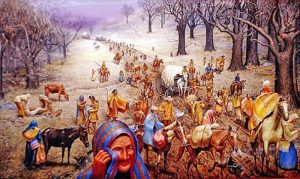 The overall effect of the Creek Trail of Tears was staggering.  In 1832, 21,792 Creek lived in Georgia and Alabama. Twenty years after the “removal” ended, only 13,537 Creek remained in Oklahoma. Some 8,000 people apparently had died. Counted as a percentage of their population, the Creek and related tribes suffered more deaths than the Cherokee in their own, far better-known Trail of Tears. Despite continued hardships, its citizens carved a new life for themselves in Oklahoma. Today, their descendants remain a proud and sovereign people.