The Eyeish were a tribe of the Caddo Confederacy but spoke a different dialect, now extinct, that was very different from the dialects of the other Caddo tribes; hence, it is probable they were part of an older confederacy which was incorporated in the Caddo when the latter became dominant.

The early home of the tribe was on Eyeish Creek between the Sabine and Neches Rivers of East Texas. Spanish explorer Luis de Moscoso Alvarado led his troops through their country in 1542, encountering herds of buffalo. According to early documentation, the Eyeish were not on good terms with the tribes west of them on the Trinity River, nor with those on Red River in the north when the French entered their country late in the 17th century. The mission of Nuestra Señora de los Dolores de Los Tejas was established among them by the Franciscans who accompanied Don Domingo Ramon on his tour in 1716-17. They were, however, not open to Spanish influence, for, after 50 years of missionary effort, the mission register showed only 11 baptisms, 7 interments, and 3 marriages performed at the mission, although the tribe had not been reluctant in receiving material aid from the missionaries. The mission was abandoned in 1729. 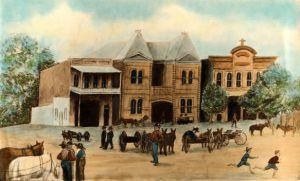 Father Gaspar José de Solís reported in 1768 that this tribe was the worst in Texas: drunken, thievish, licentious, impervious to religious influence, and dangerous to the missionaries. Their villages were not far from the road between the French post at Natchitoches and the Spanish post at Nacogdoches, and the tribe was thus exposed to the contentions of the period and to the ravages of small-pox, measles, and other new diseases introduced by the white race. In the latter part of the 18th century the Eyeish were placed under the jurisdiction of the officials residing at Nacogdoches, Texas and in 1779, it was reported there were some 20 families and that they were hated by both Indians and Spaniards. In 1785 there were reported to have been 300 people living on the Atoyac River, opposite the Nacogdoches River.

In 1805 John Sibley stated that only 20 members of the tribe were then living, but in 1828 they were said to number 160 families between the Brazos and Colorado Rivers. These differences in the estimates would seem to indicate that the Eyeish were considerably scattered during this period. Those who survived the vicissitudes which befell the Caddo tribes in the 19th century joined with their kindred on the Wichita Reservation in Oklahoma. Nothing definite is known of their customs and beliefs, which, however, were probably similar to those entertained and practiced by other tribes of the Confederacy, and no definite knowledge of their divisions and totems has survived.