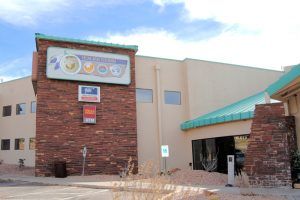 Peach Springs, Arizona, located on Route 66 in Mohave County, is the administrative headquarters of the Hualapai (“Wall-ah-pie”) Indian Tribe.

Just west of Grand Canyon Caverns, old Route 66 meanders onto the Hualapai Reservation that encompasses more than a million acres, including 108 miles of the Colorado River and a portion of the Grand Canyon. A beautiful stretch through the high-desert Hualapai Valley, the old pavement runs closely parallel to the Santa Fe Railroad tracks, passing through the town of Peach Springs and the near ghost towns of Truxton, which was born specifically to cater to Route 66 travelers; Valentine, the home of an old Indian School; and Hackberry, which got its start as a mining town. 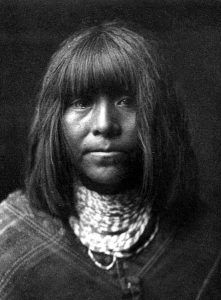 The Hualapai Indians have occupied these lands for more than 1,400 years, where the west rim of the Grand Canyon and the river below have long provided food sources and medicinal needs to the tribe. It was from the Hualapai’s west rim that the earliest visitors accessed the wild Colorado River below.

Euro-Americans became aware of the area springs during explorations in the 18th and 19th centuries. In 1857, Edward Beale carved a wagon road from Fort Defiance to the Colorado River on the border between Arizona and California. The path cuts right through Hualapai territory. In 1863, gold was discovered in the Prescott Valley, and the gold rush brought a steady flow of miners and other settlers to the area. The following year, a toll road was built through Hualapai territory between Prescott and Bull Head City. Like other tribes, the Hualapai were disturbed by increased traffic upon their lands, which erupted into the Hualapai War from 1865 to 1870. 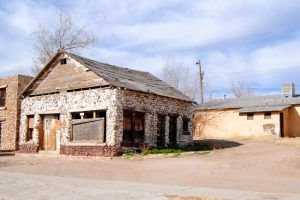 In 1866, the U.S. government granted the Atlantic & Pacific Railroad (later known as the Atchison, Topeka & Santa Fe Railroad) a right-of-way to build a transcontinental railroad and construction through northern Arizona was completed in 1883. With its abundant water, the location quickly became a “division point” for the railroad. The station was named “Peach Springs” for the many peach trees found around the spring that fed their steam engines.

Soon, a lively railroad town sprouted along the tracks at Peach Springs. A post office was established in 1887. It didn’t take long before the settlement reportedly had ten saloons but no churches or schools. The ease of access to the Grand Canyon via Peach Springs led to the construction of a roundhouse, several shops, a stagecoach line, and a Fred Harvey restaurant and hotel for tourists. The initial period of prosperity lasted for approximately two decades. 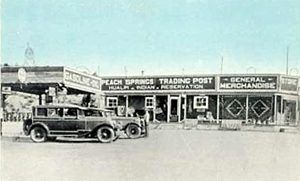 But, Peach Springs was saved with the “Good Roads” movement of the 1910s, which led to the establishment of the National Old Trails Road. This led to new prosperity for the town. In 1917, a trading post was opened, which fared very well. In 1926, the National Old Trails Road became part of Route 66. With the widening and improvement of the road, traffic through the town steadily increased, and business thrived. Several cafes, motor courts, and tourist businesses were established to service the many travelers on the road. The Peach Tree Trading Post did so well that the original frame building was razed, and a new stone building was erected.

Unfortunately, when Route 66 was replaced by I-40, Peach Springs once again declined. One local business owner recalled, “Before the bypass, Route 66 was almost like a Big City street. After completion of Interstate 40, it was ghostly quiet.”

Today, little is left of Route 66 era landmarks, but the 1917 trading post building still stands, serving as a tribal administration building. It was listed in the National Register of Historic Places in 2003. 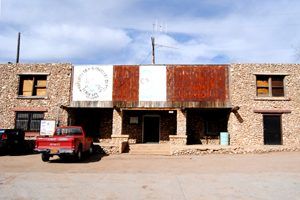 An administration office is now housed in the old trading post in Peach Springs, Arizona, by Kathy Weiser-Alexander. 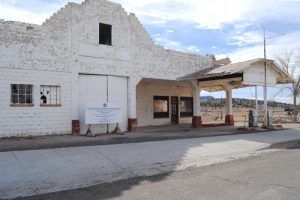 Route 66 travelers can continue westward for about 8.5 miles to tiny little Truxton, Arizona.