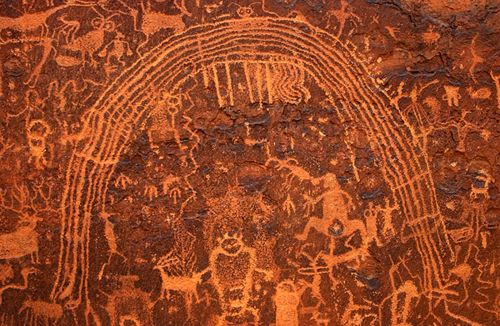 The Fremont people lived throughout Utah and adjacent areas of Idaho, Colorado, and Nevada from 700 to 1300 AD. The culture was named for the Fremont River and its valley in which many of the first Fremont sites were discovered.

The Fremont were a Puebloid group who had strong cultural affiliations with their better-known contemporaries, the Ancient Puebloans. While the Ancient Puebloans built cliff dwellings, the Fremont often lived in pit houses (dug into the ground and covered with a brush roof), wickiups (brush and log huts) and natural rock shelters. Their social structure was composed of small, loosely organized bands consisting of several families.

They were closely tied to nature and were flexible, diverse and adaptive — often making changes in their lifestyles as social or environmental changes occurred.

The Fremont maintained a hunting and gathering lifestyle and supplemented their diet by farming; growing corn, beans, and squash along the river bottoms. Edible native plants included pinon nuts, rice grass and a variety of berries, nuts, bulbs, and tubers. Corn was ground into meal on a stone surface (metate) using a hand-held grinding stone (mano.) Food was stored in pottery jars or baskets inside small masonry structures, called granaries, which were tucked under small overhangs on narrow ledges. Deer, bighorn sheep, rabbits, birds, fish, and rodents were hunted using snares, nets, fishhooks, bow and arrow, and the atlatl or throwing stick.

Archeologists have identified several kinds of artifacts that are distinctive to the Fremont people. One was a singular style of basketry, called one-rod-and-bundle, which incorporated willow, yucca, milkweed, and other native fibers. They also created pottery, mostly graywares, with smooth, polished surfaces or corrugated designs pinched into the clay.
Unlike the Ancient Puebloans who wore yucca fiber sandals, the Fremont made moccasins from the hide of large animals, such as deer, with the dew claw placed on the sole to act as a hobnail; providing extra traction on slippery surfaces.

The most unique and mysterious artifacts left by the Fremont were clay figurines. The small figures resemble people, often showing intricate details such as ear bobs, necklaces, clothing, hair, and facial decorations and sexual characteristics. The purpose of figurines is unknown, but it is believed they had magical or religious significance. 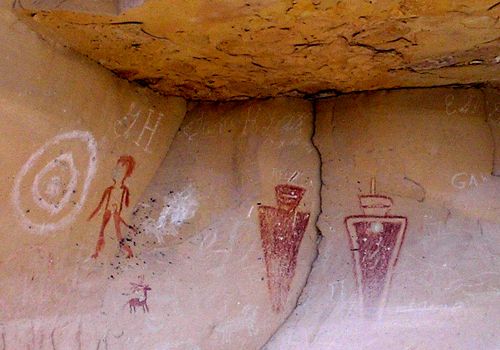 The meaning of rock art is unknown. The designs may have recorded religious or mythological events, migrations, hunting trips, resource locations, travel routes, celestial information, and other important knowledge. Many believe rock art uses symbolic concepts that provide the observer with information and that it was important, not simply artistic expression or doodling. Someday, we may understand rock art better, but only if these sites are not destroyed. The slightest touch removes fine granules of sand and leaves behind a residue of sweat and oil. Please refrain from any activity that involves touching the panels.

Fremont rock art and archaeology sites can still be seen in numerous places in the southwest including Utah’s Fremont Indian State Park, which protects the largest Fremont site ever excavated in Utah, including forty pithouses, twenty granaries, and countless artifacts and rock art panels. More can be seen at Zion, Capitol Reef, and Arches National Parks and at the Dinosaur National Monument in Colorado.

By 1300 AD, the Fremont had abandoned their villages. Archeologists can’t quite agree on what happened, but several changes are generally blamed. First, climatic conditions favorable for farming seem to have changed during this period, forcing local groups to rely more and more on wild food resources and to adopt the increased mobility necessitated in collecting wild food.

At the same time, new groups of hunter-gatherers appear to have migrated into the Fremont area from the southwestern Great Basin sometime after about 1,000 years ago. These full-time hunter-gatherers were apparently the ancestors of the Numic-speaking Ute, Paiute, and Shoshoni peoples who inhabited the region at historic contact, and perhaps they displaced, replaced, or assimilated the part-time Fremont hunter-gatherers.

Compiled and edited by Kathy Weiser/Legends of America, updated August 2017.