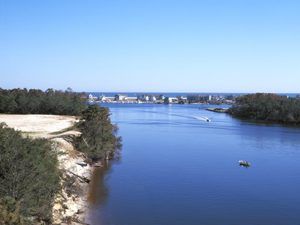 The Gullah/Geechee Cultural Heritage Corridor extends from Wilmington, North Carolina in the north to Jacksonville, Florida, in the south. The National Heritage Area includes roughly 80 barrier islands and continues inland to adjacent coastal counties, defining a region 30 miles inland throughout the United States Low Country. The Gullah/Geechee Heritage Corridor is home to the Gullah people in the Carolinas, and the Geechee in Georgia and Florida – cultural groups descended from enslaved peoples from West and Central Africa.

The Gullah and Geechee share similar linguistic, artistic and societal traits that have remained relatively intact for several centuries due to the geographic isolation of the region. The cultures represent the many ways that Africans in the Americas maintained their homeland roots while simultaneously assimilating aspects of new cultures they encountered during and after enslavement. The Spanish came into what is now the heritage area in the 16th century.

Through research, education, and interpretation, the corridor aims to preserve and raise awareness regarding the Gullah/Geechee, among America’s least-known and most unique cultures. Visitors to the southeastern coast of the country have the chance to experience Gullah/Geechee heritage through historic sites, local tours, traditional foods, cultural events, and art galleries.

There are multiple theories as to where the Gullah/Geechee people received their name. It is possible that the name “Gullah” is derived from the country of Angola, where many of the Gullah/Geechee people may have originated. Another possibility is that the name came from Gola, an ethnic group that lives in West Africa. The term “Geechee” may come from another West African ethnic group known as the Kissi. It has also been suggested that the “Gullah/Geechee” name may have Native American roots. When the Spanish arrived to the South Carolina and Georgia region, they decided to call it Guale after a Native American tribe they encountered. Guale became one of four primary Spanish mission provinces along with Timucua, Mocama, and Apalachee.

When the ratification of the 13th Amendment to the United States Constitution banned slavery in 1865, most of the African and American-born slaves along the southeastern coast remained in the region that had come to be their homes. Life on the barrier islands was quite isolated from that of the mainland, and few outside visitors ever made contact with the newly freed communities. Because of this geographic isolation and a strong sense of cultural connection amongst the people, the African Americans who today self-identify as Gullah/Geechee retained their African heritage to a strong degree.

Most of the Gullah/Geechee still live in rural communities of low-level, vernacular buildings along the Low Country mainland coast and on the barrier islands. Towns once were often dotted with dirt roads and traversed by oxen, mules, and horses. The Gullah/Geechee are the speakers of the only African-American Creole language that developed in the United States – one that combines elements of English and over 30 African dialects. Oral traditions, folklore, and storytelling are cultural traditions that have gone largely unchanged for generations. Religious ceremonies such as ring shouts, artisan crafts like sweetgrass basket weaving, and culinary traditions such as “hoppin’ John” and sweet potato pone are all preserved as part of the culture of the Gullah/Geechee.

Recently life has changed for the Gullah/Geechee. The barrier islands were accessible only by boat until the building of the first bridges starting in the early 1950s. Since that time, many traditional Gullah/Geechee communities on the islands have been altered by cultural infiltration from mainlanders or been lost entirely to real estate development. The advent of air-conditioning transformed the hot, humid islands into desirable, ocean-side property bringing outsiders into what was once solely Gullah or Geechee territory. Despite recent losses, the Gullah/Geechee people remain a testament to the power of human adaptability and cultural survival, even in the face of outside pressures from the modern world. 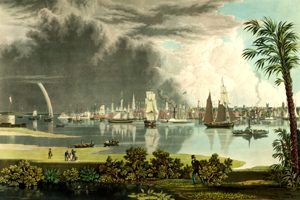 Because of the nature of the Gullah/Geechee culture and its associated corridor, many aspects of the area’s heritage are intangible and cannot be experienced through a solitary site. Local institutions and organizations thus offer regional tours and assistance. Both The Sapelo Island Cultural and Revitalization Society in Georgia, and Gullah Tours out of Charleston, South Carolina provide boat tours that focus on Gullah/Geechee culture, language, music, and storytelling.

The Gullah/Geechee Cultural Heritage Corridor protects, bolsters, and showcases the traditional Gullah/Geechee culture that remains in the region, and its relation to the overall history of slavery, plantations, abolition and emancipation in the South. Several cultural and educational institutions interpret this heritage for visitors. Geechee Kunda is a museum and community education center in Riceboro, Georgia, which features exhibits, galleries, classes and events about Geechee culture, a gift shop, and a family research center. The Avery Research Center for African-American History and Culture in Charleston, South Carolina focuses on Gullah heritage in the Low Country as well as the wider theme of the African Diaspora in America. The center offers exhibits, public programming, tours, and an extensive archival collection. 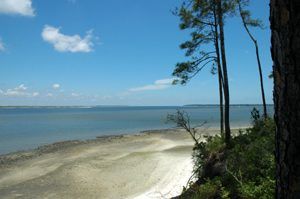 In addition to museums, visitors to the heritage corridor can experience the area through many federally recognized historic places. The National Park Service administers Cumberland Island National Seashore. Cumberland Island is Georgia’s largest, southernmost barrier island, with four major historic districts and 87 structures listed in the National Register of Historic Places. The island is still home to Geechee descendants of slaves who worked the plantations there through the mid-1800s. Park interpretive services include guided ranger tours and a museum with exhibits on the history and culture of the area.

Visitors interested in plantation history may also enjoy another unit of the National Park System, the Charles Pinckney National Historic Site in Mount Pleasant, South Carolina. The site interprets one of the authors and signers of the United States Constitution. In addition to the 1828 Farmhouse, the site focuses on plantation life and agricultural history on the 28 preserved acres of the original 715-acre property. This includes regularly scheduled Gullah heritage celebrations and a Gullah film festival.